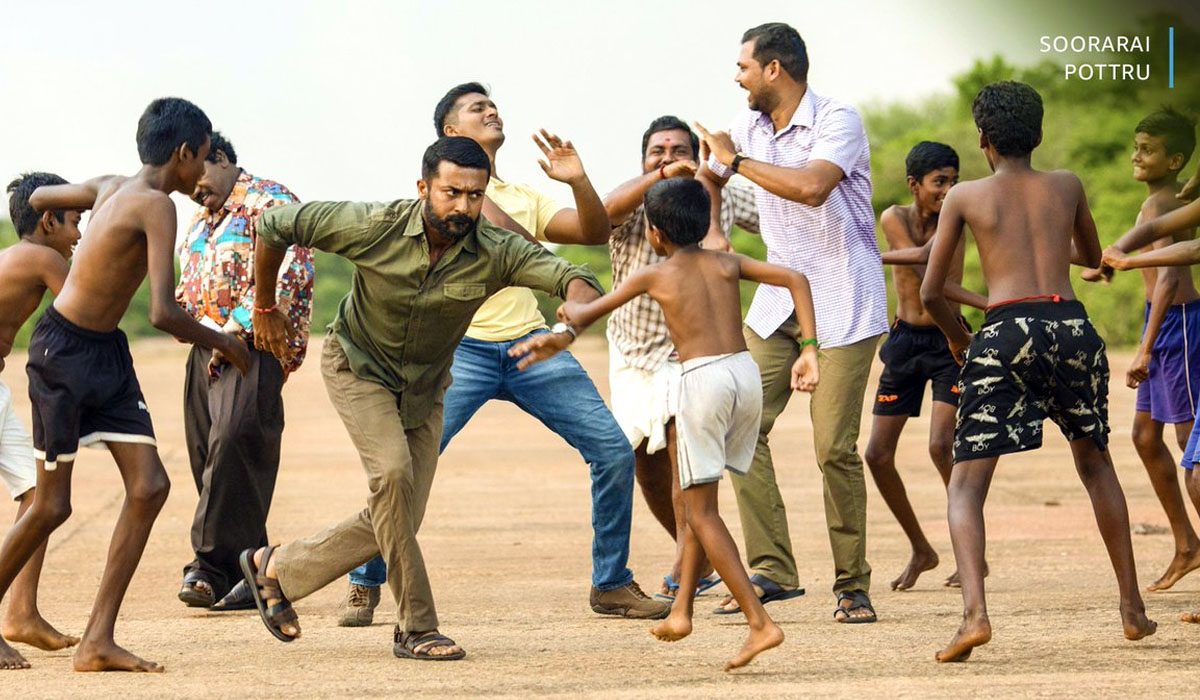 ‘Soorarai Pottru’ dropped last night and the audience response has been crazy. Fans, critics and movie goers alike have all decided to go on twitter and express their love for the movie. With this response, it is safe to say that ‘Soorarai Pottru’ has become the first Indian regional-language big star film, which opted for a digital release (due to the ongoing pandemic) to become a “legitimate hit”.

Sudha Kongara’s script is good (writing a more nuanced villain would have made this film even better, if that is even possible) and she should be commended for her directional prowess. The supporting cast is brilliant and the music and cinematography is top-notch. But the most note-worthy part of the film and what has twitter on a rampage is the actor portraying the protagonist, Superstar Suriya. So much so that the tweets and memes are basically just praises about the 45-year old actor. Check out some of those tweets below.

Saying Suriya is brilliant in this film doesn’t give justice to his onscreen performance. Suriya has always been brilliant and he has tackled various complex characters and the character of Nedumaran Rajaangam aka Maara (from ‘Soorarai Pottru’) is one of the toughest ones yet. Suriya is a chameleon in this film varying from being an angry young man, a son at odds with his father, a romantic yet exasperating husband to an obscenity-cursing businessman. True, the main antagonist needed more work – a character who is basically spouting the age-old “rich will stay rich, while poor will stay poor” gets old but the rest of the cast is brilliant and nuanced. Kongara does a brilliant job of making us believe, truly believe, that even a flawed man can achieve his dreams, if he strives towards it and believes in himself.

‘Soorarai Pottru’ revolves around Maara’s life and a dream that he seems to hold on to forever: build a low-cost airline for everyone to fly. For a film based on aviation (or rather the book Simply Fly on the founder of Air Deccan, Captain Gopinath’s life), the film shows Maara trying to reach his dreams while having to convince his school teacher father and his simple wife that his vision to fly is a dream worth pursuing.

I cried, laughed, i felt the pain on my chest when Suriya lose every single time. a full roller coaster of emotions. man this is the movie I should have experienced in theatre, fuck this Covid shit. #SooraraiPottruOnPrime pic.twitter.com/txug1IscBv

This Scene of #SooraraiPottruOnPrime Truth to be told I Cried

It's been a long time to watch a film like this #SooraraiPottru #suriya na U just nailed it.
i couldn't see #suriya in this u have lived it as #Maara
Credits to #Sudha mam and all the other actors who have done their job well.
watch #SooraraiPottruOnPrime and get enjoyed. pic.twitter.com/DHfxMcbfpE

The scene where everyone forgot what's happening and totally drowned in his acting such an scene of impact this is #SooraraiPottru movie full of emotions #SooraraiPottruOnPrime pic.twitter.com/f11xjzpV6g