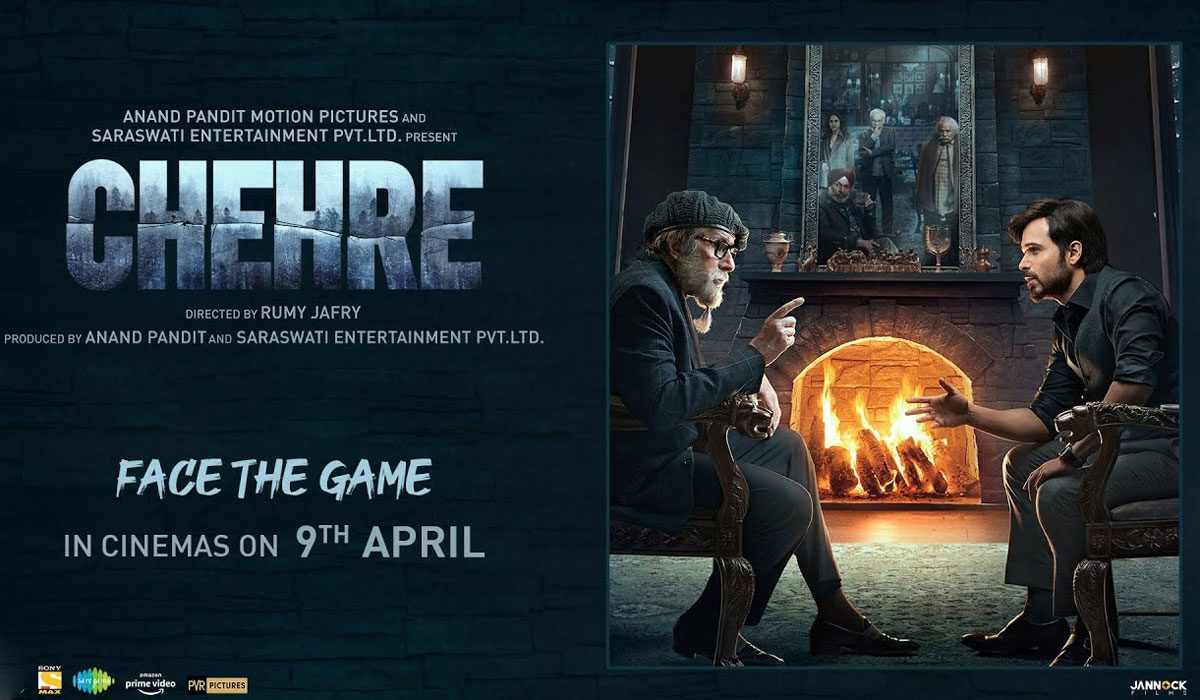 The trailer for Amitabh Bachchan and Emraan Hashmi starrer ‘Chehre‘ is out now and this one keeps you on the hooks throughout. Directed by Rumy Jafry, ‘Chehre‘ is a multi-starrer mystery-thriller film coming to cinemas on 9th April, 2021.

The trailer starts with scenes of snow fall and snow covered mountainous terrain where a black car is seen speeding through the white snow. In the background we hear Amitabh Bachchan cautioning all those who have committed a crime as ‘the game’ could be played with them as well.

The car then meets an accident and Amitabh Bachchan’s character is seen approaching it to probably lend a helping hand. We further see glimpses of items related to court followed by a group of old aged men sitting in a bungalow and chatting with Emraan Hashmi’s character. Bachchan tells him that their field is criminal law and on being asked about his profession, Hashmi explains that he is the chief of an advertisement agency.

These old men further tell Hashmi that they often gather in the bungalow and after having their food they play a game. While Hashmi arrogantly thinks it to be some usual card or board game, he is told that it’s rather something different, it’s a mock trail. And at the end of their game justice is served.

As the game is about to begin, where Hashmi will play the role of an accused, the setting for the mock trial is done and surprisingly the door is locked! Things get more intriguing and thrilling as the game gets serious and while Hashmi feels getting trapped and wants the case to end, it doesn’t seem to happen as he wishes.

There are shots in between showing romance between Krystle D’Souza and Hashmi and latter’s usual life. Towards the end of Chehre’s trailer, things speed up and we get various scenes which keeps one captivated and on the edge of their seats. We also get to see Rhea Chakraborty for a bit, though nothing concrete is revealed about her character in the trailer.

Anand Pandit Motion Pictures and Saraswati Entertainment Private Limited have produced ‘Chehre’ that has been written by Ranjit Kapoor. He has also penned down the screenplay and dialogues for the mystery-thriller film alongside director Rumy Jafry.

‘Chehre’ has been co-produced by WG CDR Ramesh Pulapka, Vaishal Shah, Mangat Pathak and Romanchak Arora and will release in theatres on 9th April, 2021.