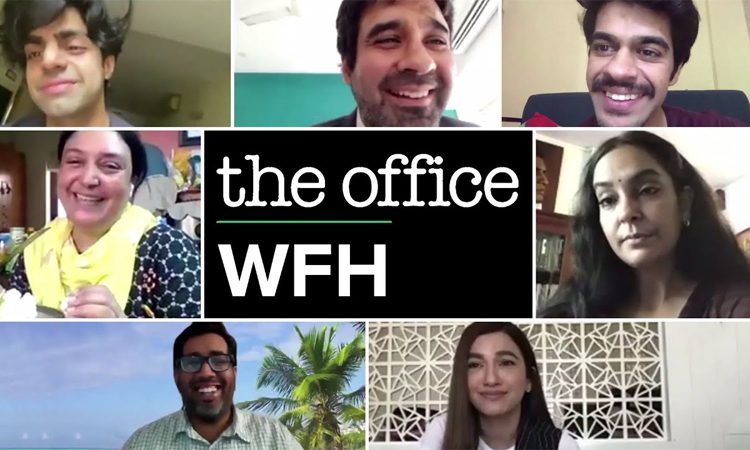 In keeping with the prevailing mood during the nationwide lockdown, Applause Entertainment has released a special ‘Work From Home’ episode of its marquee show ‘The Office‘, with all the beloved cast members participating with whole-hearted enthusiasm.

The special episode reunites all the adorable characters from the show, starting with Jagdeep Chaddha (Mukul Chadda), the manager at the paper company Wilkins Chawla. One morning, during the Coronavirus lockdown, Chaddha gets a video call from Riya (Guauhar Khan), Chaddha’s senior manager from the head office. She tells Chaddha to think up ideas for rejuvenating the company in the midst of the pandemic.

The next part of the episode has Chaddha video-conferencing with his team, and their laugh-a-minute antics as they brainstorm for ideas from their individual homes. Amit (Sayandeep Sengupta), Sapan Gill (Abhinav Sharma, Anjali (Priyanka Setia), Sarlaji (Preeti Kochar) and Kutti (Gavin Methalaka) chip in, with their hilarious quirks on full display, giving much-needed humour in these gloomy times. Of course, we sorely missed T. P. Mishra (Gopal Dutt) and Pammi (Samridhi Dewan), and hope they’ll join in for the future episodes.

Yes, this isn’t a one-off episode. More special WFH episodes are in the offing.

The special episode has been written by Aarsh Vora, Shruti Madan and Chirag Mahabal. It is available to stream on YouTube, on Applause Entertainment’s official YouTube channel.

Applause Entertainment’s The Office is an official adaptation of the U.S. version of The Office. While it was mostly panned by critics and audiences, we think the characters are quite adorable and perfectly cast. Mukul Chadda and Gopal Dutt in particular make a great impression as Jagdeep Chaddha and T P Mishra, reprising the Michael Scott – Dwight pair perfectly.