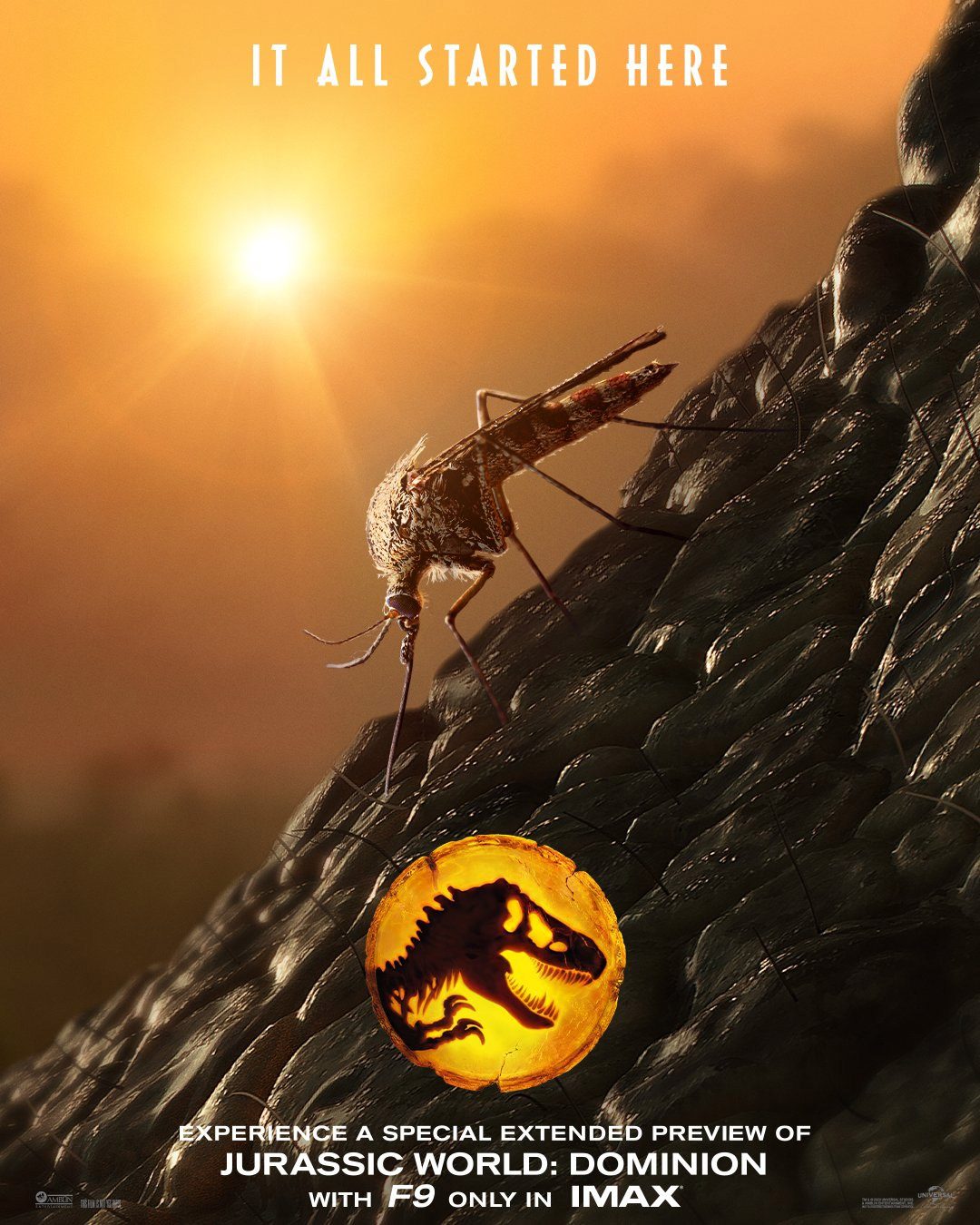 Hollywood actor Sam Neill has recently revealed, on Twitter, a poster of the upcoming film ‘Jurassic World: Dominion’. The poster was subsequently shared by Universal Pictures as well.

The image on the poster shows in what appears to be a pre-historic mosquito sucking dinosaur blood. The words “It All Started Here’ inscribed on the poster further suggest the same. Furthermore, the poster also informs us about a special edition preview of ‘Jurassic World: Dominion’ that will be screened on IMAX theatres. The preview can be seen with the forthcoming ‘Fast and Furious’ film (F9) only in IMAX theatres.

The poster, which features a mosquito apparently sitting on a dinosaur, is a trip down memory lane as it brings back beautiful memories of Steven Spielberg’s original Jurassic Park movie. Because in the first film, a super-rich businessman (played by Richard Attenborough) somehow created cloned dinosaurs by extracting Dino-DNA through prehistoric, fossilized mosquitos preserved in amber.

‘Jurassic World: Dominion’ moves closer to the original ‘Jurassic Park’ movie as it brings together the acting trio of the original film namely Sam Neill, Jeff Goldblum, and Laura Dern with stars of the ‘Jurassic World’ films including Chris Pratt and Bryce Dallas Howard.

Reportedly, the exclusive IMAX preview for the film will be screened in about forty countries including India. However, with the current pandemic situation, many of us might not be able to experience theatrical viewing in affected areas. So, here is a sneak peek of the IMAX preview as reported by Collider, who got the chance to view the preview beforehand.

(Spoilers Ahead) ‘Jurassic World: Dominion’ IMAX preview shows two timelines. One is set in the Cretaceous period 65 million years ago. In this segment, the footage shows glimpses of what earth looked like during the prehistoric era with dinosaurs roaming around (seems like a fantastic National Geographic episode).

The footage further reveals seven new species of dinosaurs, not seen in the preceding Jurassic Park films. Subsequently, viewers are treated with a short duel between a T-Rex and a Giganotosaurus. The fight ends with T-Rex getting overpowered by his opponent. It’s here when a mosquito is shown sucking the defeated dinosaur’s blood. This seems somewhat reminiscent of the animated sequence shown in the original ‘Jurassic Park’ movie. This was the critical scene that formed the basic premise for the first film.

The other segment brings back the viewers to the present timeline 65 million years later. It starts off with a T-Rex being pursued by some people in a forest area. The T-Rex escapes into a drive-in movie theatre, creating ruckus amongst the on-screen cine-goers. The T-Rex is then shown roaring in front of the movie theater screen in its trademark style. (Spoilers End)

The latest installment of the ‘Jurassic Park’ franchise and the third ‘Jurassic World’ movie has been directed by Colin Trevorrow, who had also helmed the 2015 ‘Jurassic World’ film. ‘Jurassic World: Dominion’ is expected to release theatrically precisely a year from now, i.e., on June 10, 2022.