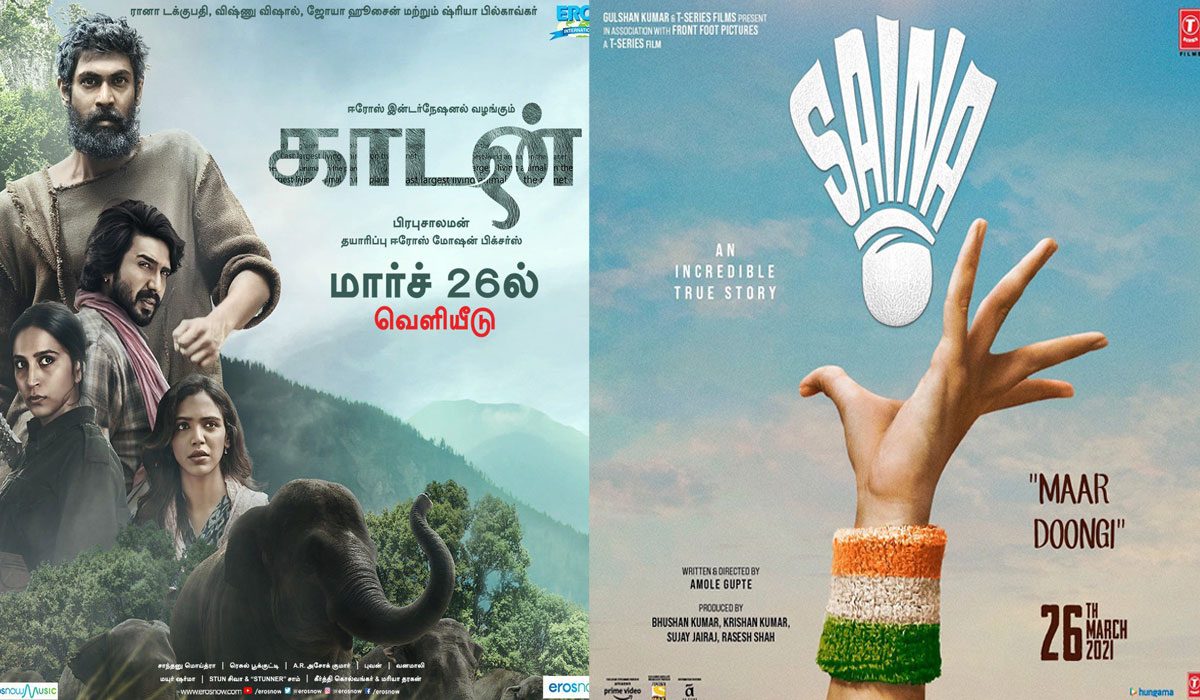 The pandemic caused many of the theatres to shut down and most of the releases that were slated for 2020 were pushed off to later so 2021 is the year where we have a slate of some of the most anticipated titles.

Many of the big guns are facing each other this time around and it seems like this may be a great year for all the cinephiles after all as they get to experience that glorious feeling of the big screen all over again.

This time let us take a look at another one of those eagerly awaited clashes.

Crew
Rana Daggubati is the main lead of this film along with Shriya Pilgoankar, Vishnu Vishal, and Zoya Hussain essaying lead roles in this project. The project has been shot on a large scale and was simultaneously filmed in Hindi and Telugu. Pulkit Samrat takes over the role of Vishnu in the Hindi version of the film. The film will be released in all three languages at the same time.

Saina has Parineeti in the lead role and even though she has showcased her potential on several occasions more of the focus will be on the story rather than the casting of this film. Apart from Parineeti Chopra, one can also see a talented roster of performers like Paresh Rawal and Manav Kaul essay pivotal roles in the film.

This round has to go to Kaadan (Aranya and Haathi Mere Saathi in Telugu and Hindi respectively) especially for Rana Daggubatti and the pan India appeal that he possesses.

Plot
The plot of the Rana Daggubati starrer is really simple with the theme of forest conservation at the heart of it. It is the tale of a man and the special bond that he shares with elephants and is willing to do anything to save their habitat.

Saina is a biographical film that depicts the journey of the badminton ace Saina Nehwal who has won a lot of laurels for the nation in her sport and her journey has been an inspiration for the younger generation especially those who want to make a career in sports.

Even though Kaadan has a very heartwarming theme and message, the curiosity among the people to get a glimpse into what made Saina Nehwal a global badminton phenomenon is what swings this round in favour of Saina.

Buzz
Rana Daggubbati and the vision of the filmmakers are enough to spark a certain curiosity among the viewers. The fact that it will be released in three languages at the same time is also a great way to capture a pan-Indian audience especially with a face like Rana Dagubbati heading the cast.

Saina has already created a lot of buzz as the biographical feature will give us a better look at what went into making her one of India’s most successful badminton players and sportswoman. She is an inspiration to many youngsters and the audience would be more than excited to see her story on the big screen.

Even though there may be some different opinions we would have to call this round a tie as both the films have created a unique buzz with the kind of theme and storyline that they portray.

Both of the films have been made on a grand scale and will try their best to target a vast array of audience. this clash will be really interesting as both of the projects have some great artillery in their ranks and would be an amazing battle but cinephiles across India are sure to profit from it. Both of the films are tied in our opinion and we will have to see which film can perform to its highest.