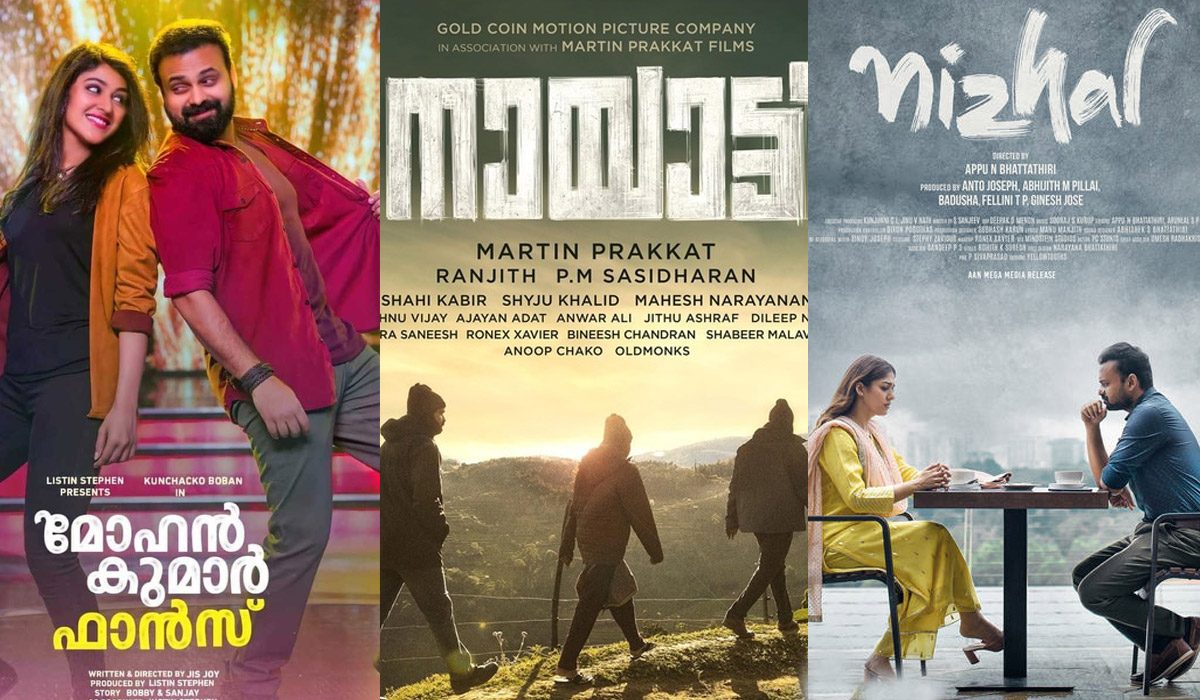 As mentioned in the title, Kunchacko Boban is proving to be one of the busiest Malayali stars currently – with 3 movies releasing in the span of 3 weeks. From March 19th till today, April 9th – Kunchacko Boban has managed to be a part of the main cast of the films – ‘Mohan Kumar Fans’ alongside Siddique, Mukesh and Sreenivasan, ‘Nayattu’ with Joju George and Nimisha Sajayan and ‘Nizhal’ alongside “Lady Superstar” Nayanthara. Check out their release dates at the end of this article.

Halfway through March, the small budget comedy-drama ‘Mohan Kumar Fans’ released in theaters which ended up being a philosophical feel good movie. Critics didn’t rate this movie very highly but it still brought audience members to the cinema halls and travelled well by word of mouth. Kunchacko Boban plays an aspiring singer in this movie. In the other two movies, he plays two drastically different roles, from each other and also from the aforementioned mentioned one as well.

In ‘Nayattu’, he plays a cop who is into the sport of “Vadamvali” AKA Tug-of-war. He had to beef up for the role. The movie, however, is a chilling one as it follows three police officers as they are on the run from people who are searching for them. This movie was well received by critics and audiences alike and we predict this movie to do much better than ‘Mohan Kumar Fans’.

‘Nizhal’ just released in theaters today. We will get a better idea of the movie’s reception by tomorrow, but so far the response has been good from movie goers so far. Kunchacko Boban will play a judge in the movie, who wears a mask because of a nose injury. He and his team are searching for a woman and child for a particular case. This investigative thriller is expected to be very different from the previously mentioned feel-good ‘Mohan Kumar Fans’ and the survival thriller ‘Nayattu’.

Kunchacko Boban has proved to be very busy in the past few months due to his back to back roles and hopefully ‘Nizhal’ and ‘Nayattu’ will not have to compete much against each other in the Kerala Box Office. For now, we will have to wait and see.

‘Mohan Kumar Fans’ dropped in theaters on 19th March 2021. ‘Nayattu’ and ‘Nizhal’ dropped very recently in cinemas, a day apart from each other, on 8th April 2021 and 9th April 2021 respectively.