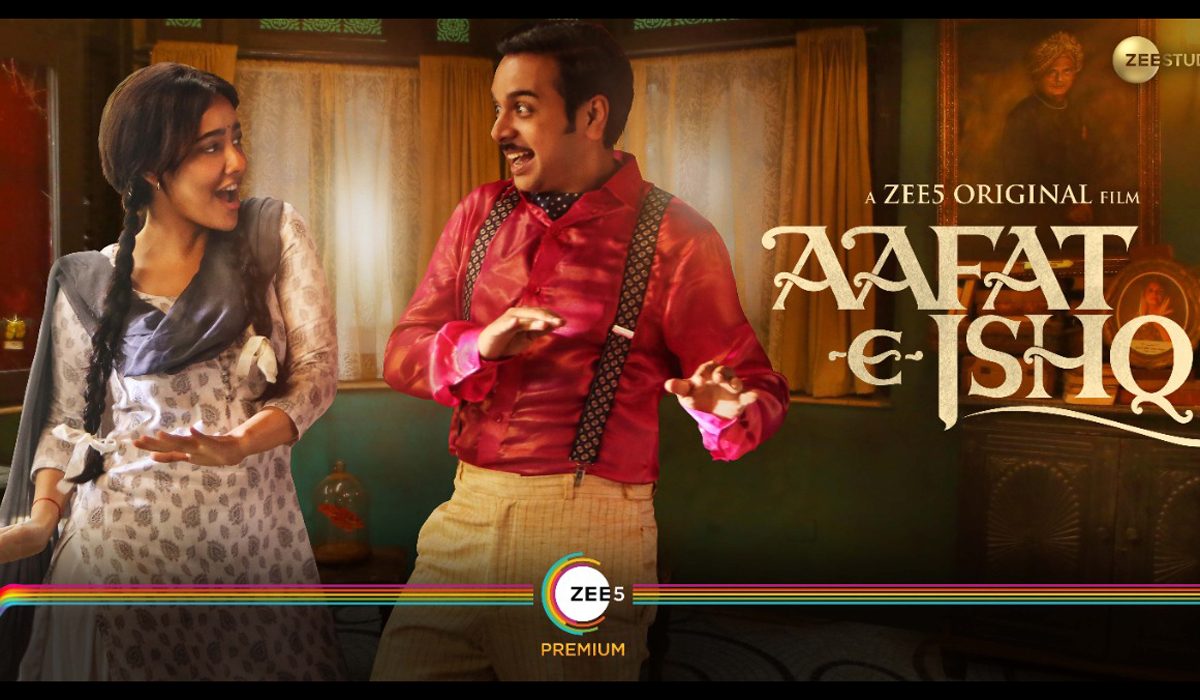 Zee5‘s upcoming dark comic thriller Aafat-e-Ishq is about to drop on the platform soon as indicated by the platform on its social media handles. The images and motion posters released by Zee5 offer a sneak peek into the fun yet intriguing ride that Aafat-e-Ishq is going to be.

Aafat-e-Ishq is a Zee5 original film and is the Hindi remake of the multi-award winning Hungarian film ‘Lizzy The Fox-Fairy’. The genre of the film is interesting as it is an amalgamation of dark comedy, romance, thriller and some supernatural drama. The story of Aafat-e-Ishq follows a woman’s quest for true love, how she finds herself as a prime suspect under multiple deaths while an ancient curse looms large, threatening to destroy everything and everyone around her.

The ‘Crook’ actress will be seen in the lead role of Lallo, the Indian version of Lizzy. She is a 30 year old woman who’s looking for love. Her quest for love takes her from social media to cafés. But her luck is such that whenever there is an opportunity for her to fall in love, supernatural forces come into play and take it away from her. Neha has been seen in many glamorous roles before but this time it’s different and something very new for her.

The veteran actress and folk singer Ila Arun plays the role of Bahuji, Lolla’s employer. She is a woman with a big house and a lot of wealth. She leaves everything in the name of her maid Lallo, leaving her relatives annoyed who later file a case against Lallo. Ila Arun was recently seen as principal Usha Ji in Rajkumar Rao and Nushrat Bharucha starrer ‘Chhalang’ on Amazon Prime Video.

Namit Das will be seen in the role of a friendly ghost named Atmaram. He is a constant companion of Lallo, being with her through all her highs and lows. His role will be something to look out for as this friendly ghost was a singer when he was alive. Namit’s recent works include Netflix’s ‘A Suitable Boy’, Disney+Hotstar’s ‘Aarya’ and many more.

Here’s his look from the film 👇

Amit Sial plays Prem Gunjan, Bhauji’s nephew and a casanova. He knows his ways around women and easily wins their heart. Lallo falls in love with him and dreams of a future together. But with the curse looming over, will she be able to do so? Sial was recently seen in Amazon’s ‘Mirzapur’ Season 2 and SonyLIV’s ‘A Simple Murder’.

The ‘Tanu Weds Manu’ actor will play the role of the investigative officer Vikram Kamal. He will handle Bahuji and her family’s case. Also, he secretly likes Lallo but is afraid to tell her. Dobriyal is known for his flawless performances and comic timing.

Aafat-e-Ishq is an upcoming Zee5 original film. The release date are yet to be announced by the platform.
Follow us on Google News