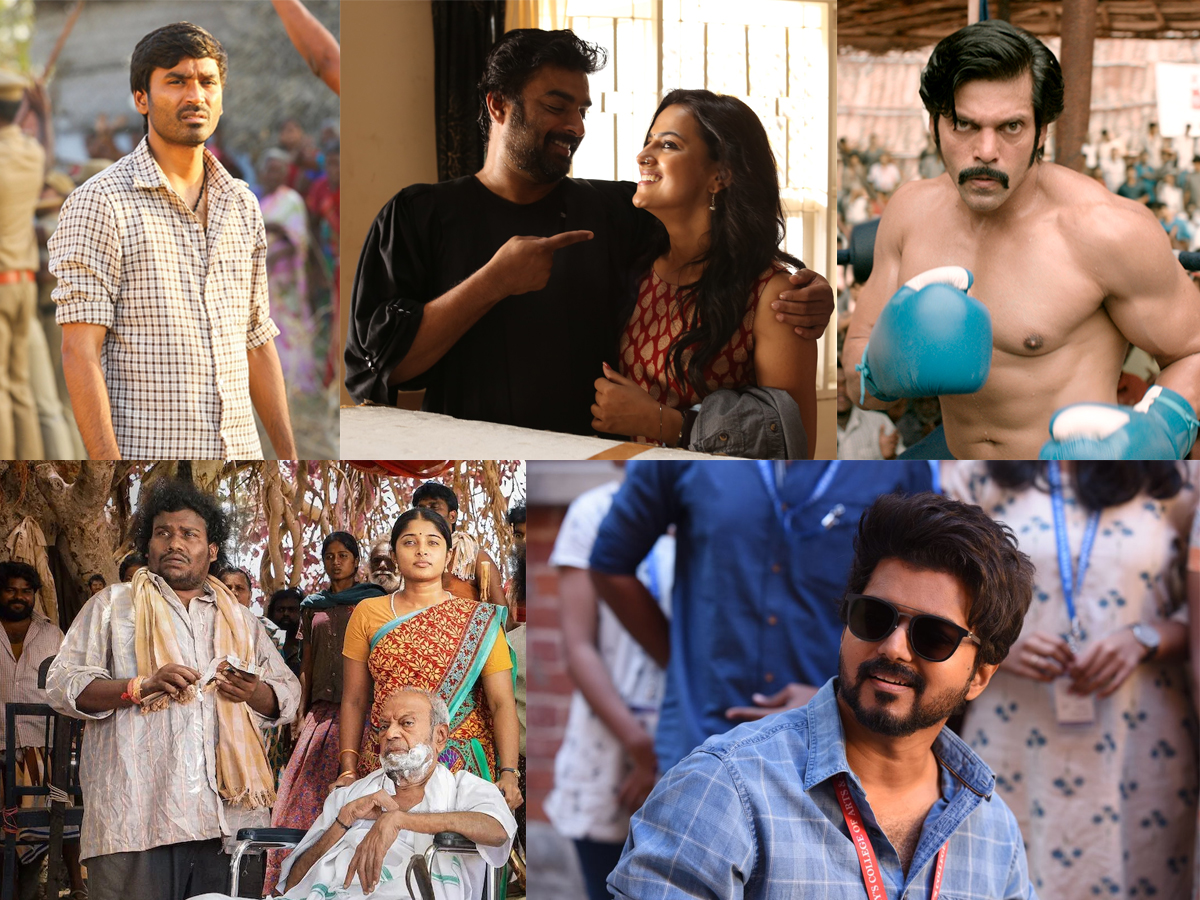 This year has seen some amazing Tamil films across all genres and although not all could make it to theatres owing to the pandemic, the good ones have received the love they deserve and have made it into people’s hearts. Where we expected more from movies like ‘Jagame Thandiram’, ‘Eeswaran’, ‘Bhoomi’ and ‘Tughlaq Durbar’, there have been some movies that came and shook us to our very core. Luckily, most of these gems are available on OTT and we have put together a list of the must watch Tamil films of the year 2021 just for you-

1. Sarpatta Parambarai (Amazon Prime Video)
This Pa Ranjith directed sports action drama features Arya in the lead alongwith John Kokken, Shabeer Kallarakkal, Dushara Vijayan, Pasupathy, Anupama Kumar and Sanchana Natarajan in important roles. Set in the 1970s, the film, against the backdrop of the boxing sport, revolves around a clash between two clans and the politics surrounding it. The film opened to great reviews and critical acclaim, with lead actor Arya’s performance being praised to the moon. With an IMDb rating of 8.7, this gem of the year is truly worth your time.

2. Karnan (Amazon Prime Video)
This Mari Selvaraj directorial is another gem in Dhanush‘s filmography. A powerful tale of defiance against oppression, the film stars Dhanush in the lead, with Yogi Babu, Lal, Natarajan Subramaniam and Rajisha Vijayan in important roles. Undoubtedly one of the best films of the year, the plot is set against the backdrop of casteism and is about a fearless youth’s revolt against the inhuman treatment meted out to his fellow villagers. With an IMDb rating of 8.2, this film is not to be missed.

3. Maara (Amazon Prime Video)
Directed by Dhilip Kumar, this remake of Malayalam film ‘Charlie’ stars Madhavan and Shraddha Srinath in lead roles. The plot revolves around a young architect (played by Shraddha) attracted to street paintings by a vagabond artist, Maara (played by Madhavan). Although a little lengthy, the film is considered a better adaptation than the original. A feel good fantasy of a love story where the lead pair meet only in the very last scene. A must watch for hopeless romantics, this film scores a 7.7 on the IMDb meter.

4. Master (Amazon Prime Video)
Directed by Lokesh Kanagaraj, this IMDb 7.8 rated film stars Thalapathy Vijay and Vijay Sethupathi in the lead, with Malavika Mohanan, Shanthanu Bhagyaraj, Andrea Jeremiah, Arjun Das and Gouri G. Kishan in supporting roles. The plot revolves around an alcoholic professor teaching at a juvenile facility, who locks horns with a ruthless gangster using the kids as scapegoats for his crimes. A unique massy film, watch it more for the performances than anything else. The film emerged as the highest Tamil grosser of the year and is hailed as the theatre reviver, post the first covid wave.

5. Mandela (Netflix)
Directed by debutant Madonne Ashwin, the political satire comedy drama stars Yogi Babu in the lead with Sheela Rajkumar, Kanna Ravi, Sangili Murugan and G. M. Sundar in supporting roles. The film is set against the backdrop of a local village panchayat election between two political parties, where the single deciding vote comes down to a local barber. With an IMDb rating of 8.5, it is regarded as one of Yogi Babu’s finest performances and should definitely be on your watchlist.Follow us on Google News