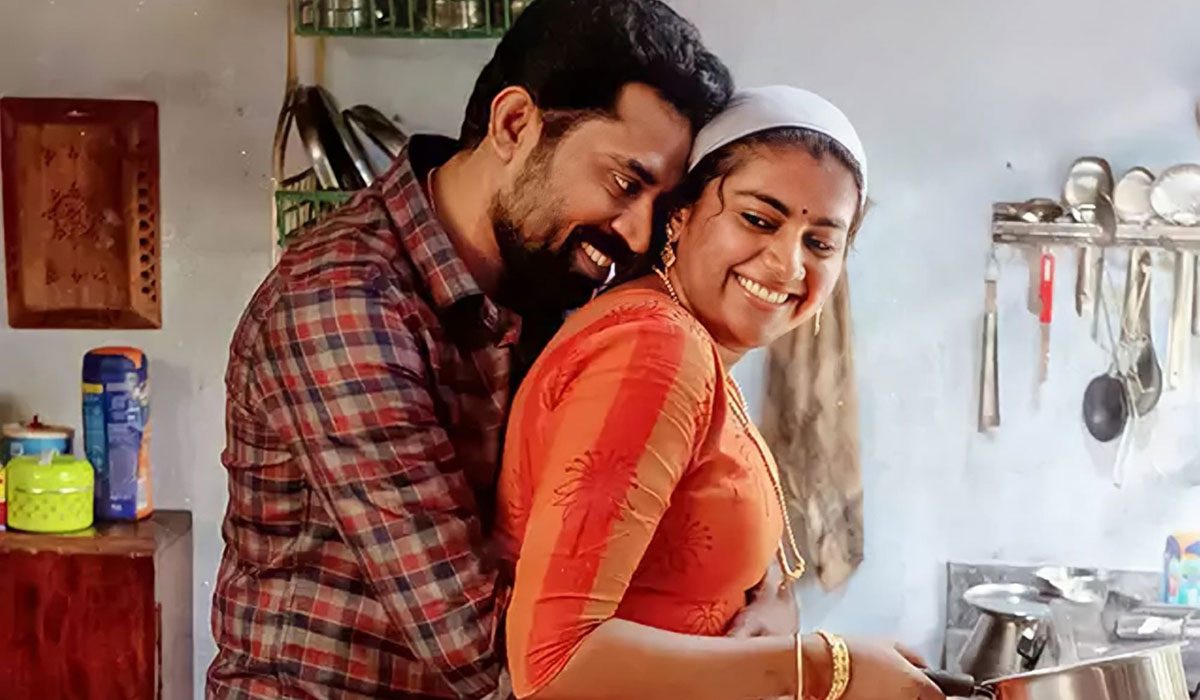 Suraj Venjaramoodu starrer The Great Indian Kitchen dropped yesterday in a regional OTT streaming platform called Neestream. The film has been praised for its brilliant take on a subject matter that has not been explored very deeply, especially in Indian cinema. This contemporary feature has also garnered love from multiple viewers as well, but is unfortunately not doing as well as it should due to the limitation of its current streaming platform.

Suraj reunites with his Thondimuthalum Driksakshiyum co-star Nimisha Sajayan and they both portray another married couple in The Great Indian Kitchen. But even though Suraj is the main star of the film, make no mistake, Nimisha is the protagonist of this film. Nimisha gives us a brilliant portrayal of a housewife who is slowly losing herself into obscurity.

Nimisha’s character married Suraj’s character in this movie. As she moves into her husband’s home, we are forced to see the stark reality of a woman’s role in her new household. The woman is expected to prepare food and be the perfect daughter-in-law while the men in the family laze around till the food is served. We also see a “taboo subject matter” discussed in the film, showing how Nimisha is treated by her family while she is menstruating. Another scene shows her father-in-law dissuading her from applying for a job as he cites the importance of women’s role at home, which is far superior than any paying job they can get.

And the movie works. Surprisingly. This is because the film doesn’t come off as preachy. It just shows how the patriarchy has essentially enslaved women to do their bidding (sounds a little dramatic, but unfortunately quite true in its core) and the film just ends on a contemplative note. Literally on the lines of – this is the situation, there is no right or wrong …or is there?

The surprising thing is that Netflix didn’t even watch The Great Indian Kitchen while Amazon Prime Video didn’t find the movie “fitting their criteria”. These OTT giants who are looking to diversify and spend a lot of money for regional content need to understand the audience they are catering towards. Breaking News broke this new first on twitter. Check out their tweets below. One of the tweets will have a link which will have an interview with the director of the film.

Of course, Malayalam audiences do love films with superstar actors, but if they have been noticing the trend in Mollywood lately, contemporary films have been earning a lot of money in the box office for the past 8 to 10 years. And these films have garnered attention from the 16-35 year demographic – the same demographic who actively use OTTs. Hopefully the love shown for (and the buzz created around) The Great Indian Kitchen will hopefully help these OTT giants about the type of films (and filmmakers) they need to invest in and stream on their platforms.

Check out The Great Indian Kitchen on Neestream.

Director of #TheGreatIndianKitchen revealed that he approached @NetflixIndia @PrimeVideoIN & both rejected the film. #Netflix didn't even bother watching the film. for #AmazonPrimeVideo the film didn't fit 'their criterion' – which when asked about they didn't even reply.