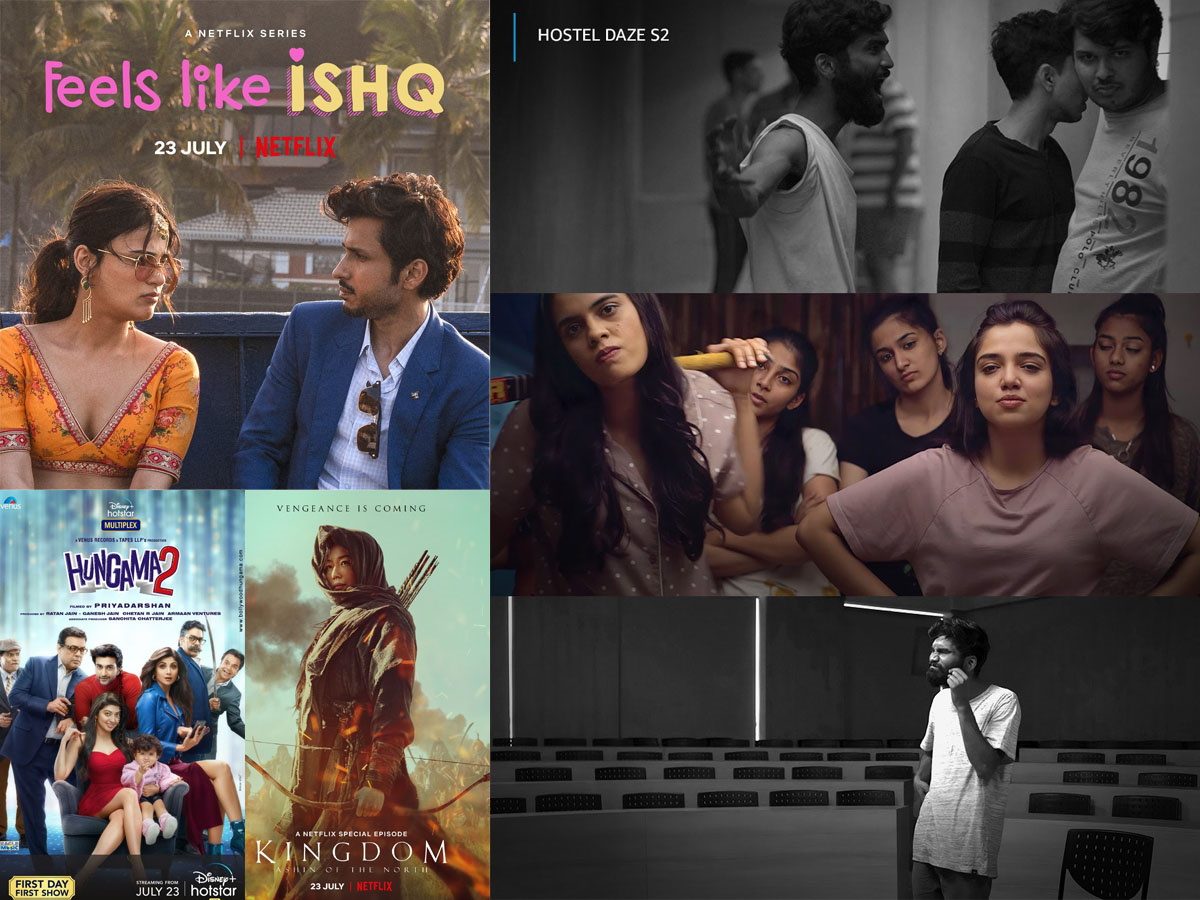 Friday, 23rd July – nothing special about the date, one would think. There’s no festival on the date, nor is it a day of national importance. But if you were to cast an eye on the stacked streaming calendar for the date, you would think it was Diwali or Eid or something. Chew this—every streaming platform worth its salt has major releases coming up on 23rd July. It’s like the floodgates open up on the day, to let out a deluge of top-notch content for digital viewers.

Don’t believe us? Check out the humongous list of titles premiering on OTT on 23rd July, and then you just might!

An anthology of six short stories, all centred around the common theme of two strangers meeting, and falling in love at first sight. Six stellar directors helm the stories, supporter by an eclectic ensemble cast.

A horror thriller film centred on a woman with a hidden power, which she must unleash to save her child from the merciless killers who have hijacked their flight. Dominic Purcell (Prison Break) plays one of the hijackers.

A special one-off episode from the much-loved Kingdom series, before Kingdom Season 3 arrives on Netflix. Kingdom: Ashin Of The North will act as a sidequel to the second season of Kingdom and will explore the backstory of Ashin, the mysterious character Lee Chang’s group encountered on their journey north to discover the origins of the infected.

The Last Letter From Your Lover –

A British romantic drama film, it centres on a young female journalist’s quest to discover the source of series of love letters from the 1960s that she accidentally uncovers in the course of daily work. Soon, she becomes obsessed with discovering the lovers’ identities and finding out how their love story ends.

Masters of the Universe: Revelation Part 1

Sky Rojo traces the journey of three exotic dancers forced into prostitution by the clubowner-turned-pimp. The three manage to escape from the clutches of the gang, and are on the run. Season 2 centres on how the spunky women outsmart their tormentors and hunt them down. It is a creation of Money Heist creator, Álex Pina.

A Mexican Comedy Film about two directionless brothers who get high and float a bold new social justice app. Hilarity ensues when their pitch gets bankrolled and raises millions, but…there is no app! So now the two have to come up with an app in double quick time.

A comic caper revolving around the shenanigans of the Indian marriage scenario, it stars Vikrant Massey and Kriti Kharbanda, and is directed by Devanshu Kumar.

Will also release in Tamil and Telugu as Double Kalyanam

Season 2 of the TVF show Hostel Daze takes up the tale of the bunch of engineering students and their travails of living in a hostel, dealing with studies, submissions and first crushes. The original cast of Nikhil Vijay, Shubham Gaur, Adarsh Gaurav, Ahsaas Channa and Ayushi Gupta returns for Season 2.

An action comedy, it is about a female bouncer (Kate Beckinsale) with an anger management problem, who has to jolt herself with shock therapy to control her murderous temperament. She goes on a revenge-fueled rampage after the murder of the first man she falls for.

Chutzpah is Maddock Films’ entry into the OTT space. It is a fun and engaging series on the social media shenanigans of a bunch of young adults, and the internet world they inhabit – of hashtags, filters, likes, shares and subscribe! Chutzpah is a humour-filled story that showcases the world of social media and its influence over the youth of today.

SonyLIV brings the live streaming of the Tokyo Olympics, right from the opening ceremony, to all the events, and the closing ceremony of the sporting spectacle

Murder In The Hills –

An atmospheric Bengali murder mystery set in the backdrop of hilly Darjeeling, hence the name. A yesteryears Bengali star is murdered, which sets off a chain of events that will expose the seedy underbelly of the serene hill station.

An action thriller, headlined by Jason Statham and directed by Guy Ritchie. Jason Statham plays a newly-appointed cash truck driver who foils a robbery attempt with expert marksmanship and precision combat skills. His qualities make his superiors question his background and his motive in taking up the job.

A brand new season of the dating reality show, with a new bunch of contestants who are confined on the island, and carry out a number of tasks, swapping partners all along, until they meet the love of their life.

The heartwarming and outrageously funny story of the unassuming, affable small-time football coach, Ted Lasso, who is unexpectedly recruited to coach an English Premier League team, AFC Richmond, despite having no experience in association football.

Celebrity cooking show, Aha Bhojanambu, premieres on Aha Video, a one of a kind show in Telugu content. Hosted by actress and film producer Lakshmi Manchu, it will have various celebrities come on the show as guests, and whip up their favourite comfort foods and culinary delights. Rakul Preet Singh, Tharun Bhascker, Vishnu Manchu, Akhil Akkineni, Prakash Raj, Anand Deverakonda, Rana Daggubati and Vishwak Sen are some of the guests slated to appear on the show.