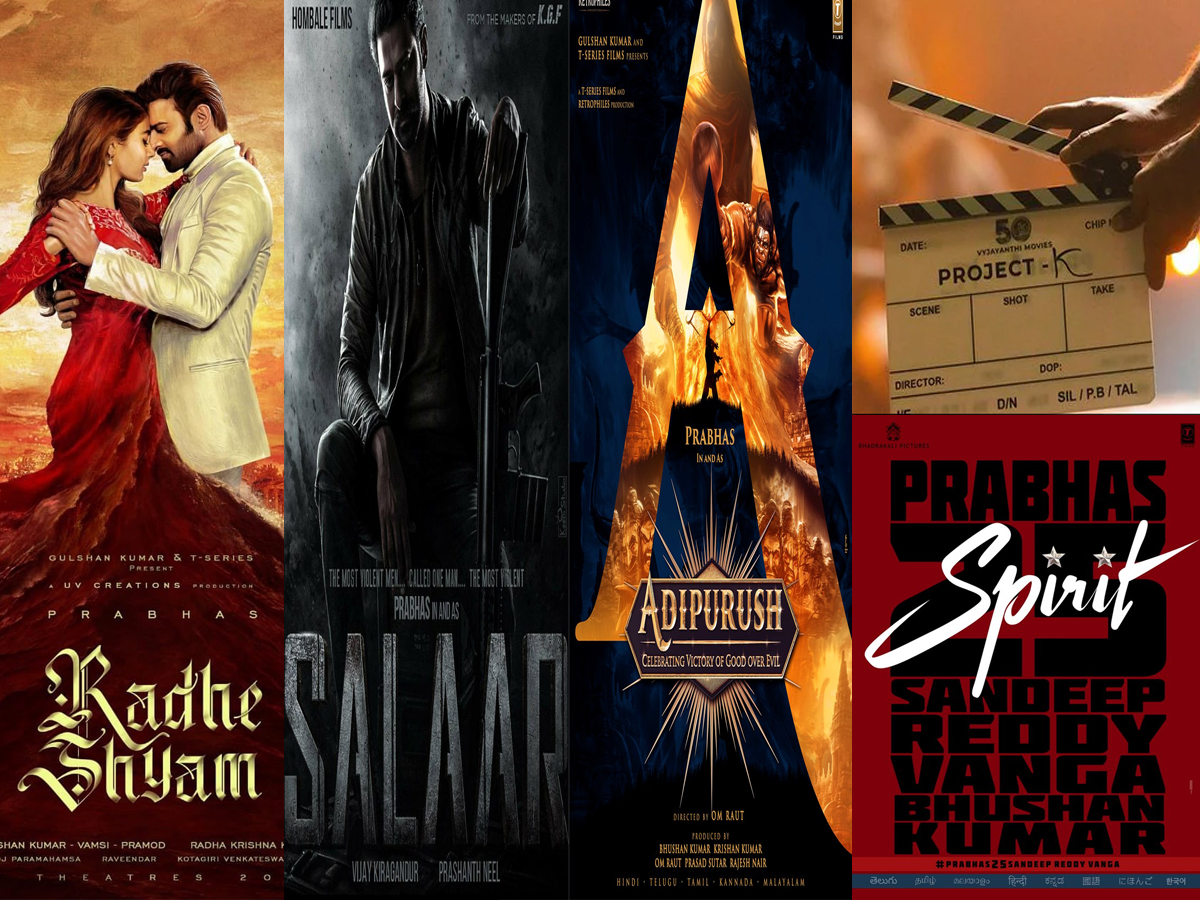 Yesterday, there was a huge announcement about Prabhas’ 25th cinematic venture titled ‘Spirit’ to be helmed by Sandeep Reddy Vanga. Besides ‘Spirit’, the ‘Baahubali’ actor has multiple big-ticket films under his belt. For this article, we have compiled a list of these films along with their tentative/confirmed release details.

Set in 1970s Europe, ‘Radhe Shyam’ is a period romance drama that features Prabhas and Pooja Hedge in the lead roles. For a Pan-India appeal, the film was shot concurrently in Telugu and Hindi languages. Written and directed by Radha Krishna Kumar, the film is all geared up for a grand theatrical release on 14th January 2022. The estimated budget of the film is to the tune of Rs.350 crores.

This is an action thriller by the man behind the immensely successful ‘K.G.F Chapter 1’ – Prashanth Neel and also features Shruti Haasan alongside, of course, Prabhas. The filming of ‘Salaar’ began in early 2021 in the coal mines near the city of Godavarikhani, Telangana, and is currently scheduled for a grand theatrical release on April 14, 2022. Whatever is known about the film and its production values so far and considering the incredible curiosity quotient surrounding the film., it seems like ‘Salaar’ already has blockbuster stamped all over it.

Om Raut’s directorial ‘Adipurush’ is certainly one of the most highly anticipated movies to be announced recently. The mythological movie is based on one of the two major Hindu epics Ramayana and stars Prabhas in the titular role of Adipurush (Lord Ram), Saif Ali Khan as Lankesh (Raavan), ‘Mimi’ actress Kriti Sanon as Sita, and Sunny Singh as Lord Ram’s brother Lakshmana. Like ‘Radhe Shyam’, the film will release in Hindi and Telugu besides being dubbed in Tamil, Malayalam, and Kannada languages. The estimated budget for the film is a whopping Rs.500 crores. The film is expected to release in theatres on 11th August 2022.

Helmed by Nag Ashwin, Project K is a science fiction film starring legendary actor Amitabh Bachchan alongside Prabhas and Deepika Padukone in the lead roles. The ambitious movie’s filming is expected to commence from November and will carry on for more than a year. So, the film might be expected to release somewhere in 2023.

‘Spirit’ is the latest acting venture starring Prabhas that was announced in the recent past. The film will be directed by ‘Kabir Singh’ director Sandeep Reddy Vanga, whose upcoming project includes the Ranbir Kapoor starrer gangster drama ‘Animal’. As far as the film’s premise and release details are concerned, it might be too early to say anything about the same. Stay tuned to Binged for further updates on Prabhas’ films.