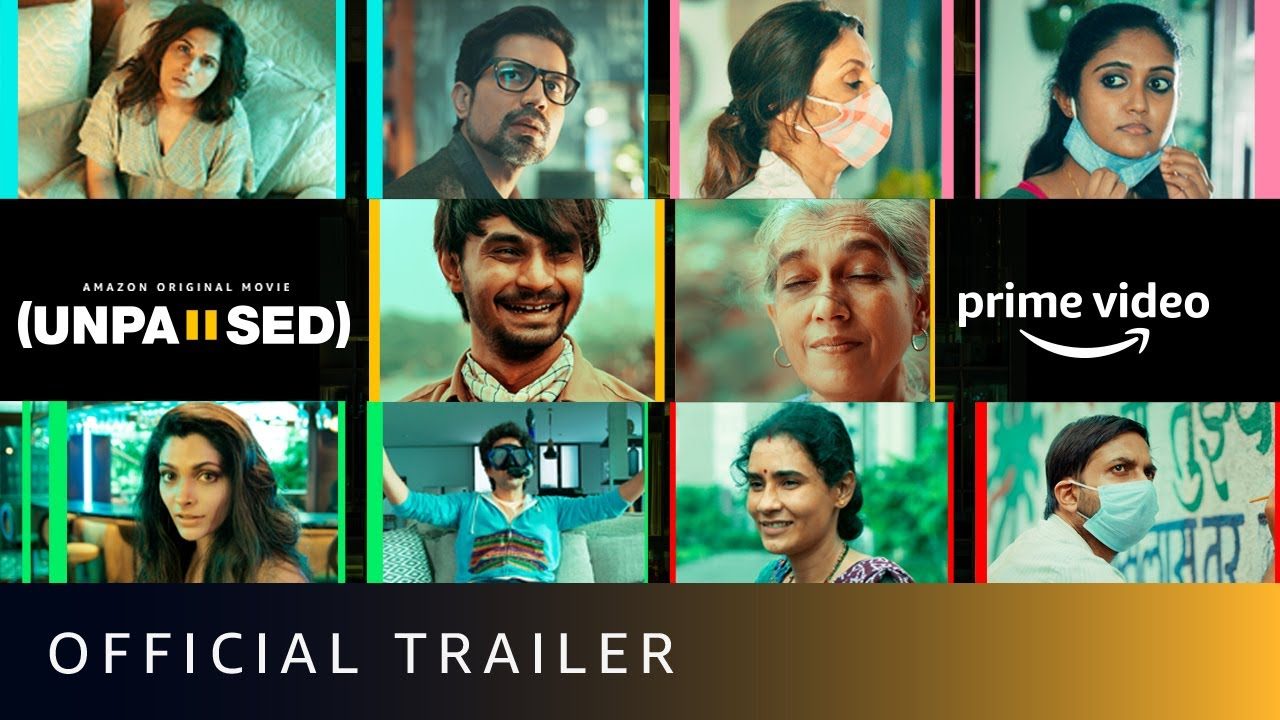 ‘Unpaused‘ is an ensemble of five beautiful stories that are both set and filmed during the lockdown. The trailer gives glimpses into all these stories one by one. The first is ‘Glitch’ by Raj & DK (‘The Family Man’, ‘Stree’) featuring Gulshan Devaiah, Saiyami Kher and Komal Chhabria. It’s the story about a man, sacred to death because of the virus, and a woman who believes in love. Will their story take a beautiful turn or will something unexpected happen?

The second story is by Nitya Mehra (‘Baar Baar Dekho’) named ‘Chaand Mubarak’ starring Ratna Pathak Shah as an elderly woman who lives alone and likes it like that and Shardul Bhardwaj as a rickshaw driver, who on the other hand misses the Mumbai traffic. How they bond as she takes rides with his rickshaw to places is going to be a refreshing and interesting story.

Then comes ‘Apartment’ by Nikkhil Advani (‘Kal Ho Na Ho’, ‘Batla House’) that stars Sumeet Vyas, Richa Chadha and Ishwak Singh in the lead. The trailer shows that while Chadha’s character tells Vyas about the sexual misconduct complaints against him, he tries to put the blame on her saying that she could have stopped him. This story takes a view at the so called modern strata of society whose thought process is yet to become modern.

We have Tannishtha Chatterjee’s (actress – ‘Brick Lane’, ‘Dekh Indian Circus’) ‘Rat – A Tat’ next. Featuring Lillette Dubey and Rinku Rajguru as neighbours who had to share an apartment while a rat enters the house of the latter and she is very much afraid of the creature. These two women of different age groups do not start off very well but gradually develop a beautiful friendship as they spend more time together.

And finally, there is ‘Vishaanu’ by Avinash Arun (‘Pataal Lok’) starring Abhishek Banerjee, Geetika Vidya Ohlyan and Palash Prajapati. Its the story of a poor family who discovers and lives in a newly made, well furnished flat in an underconstruction building during the lockdown. When asked by a friend over a call, they lie about their whereabouts and living the life they could only dream of.

All the five stories are intricately and beautifully woven into Amazon Prime Video’s ‘Unpaused’. The anthology has an overwhelming feel to it that will make you fall in love instantly. These stories are nothing less than masterpieces crafted by the immensely talented filmmakers. The background music gives a sense of ease that life is not going to be easy but we can survive through the odds together.