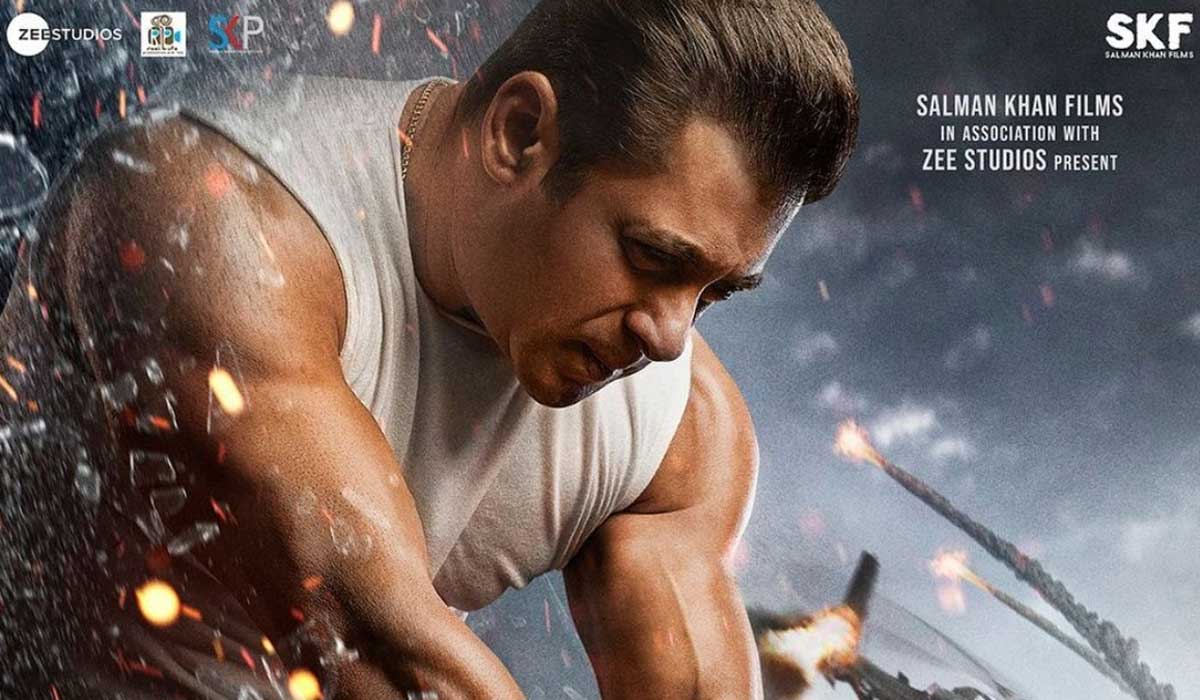 Radhe: Your Most Wanted Bhai, is Salman Khan’s latest Eid gift this year for his fans. Released on 13th of May, the movie was chosen for a simultaneous theatre and digital release. The gamble turned out to be great as in India, Radhe opening in theatres was not an option with such worsening conditions of Covid in the country.

Radhe, released digitally through ZEE5 and also through pay per view method on Zee Plex, created records as it easily topped the list of most watched movies on ZEE’s streaming sites. The film has garnered 4.2 million views across all streaming platforms. While the digital release was a success, the theatrical release outside India, too garnered a lot of attention, as it brought in considerable revenue during the Covid situations.

While Radhe has been enjoying its success, it has also started facing a lot of issues related to its release. Piracy, one of the biggest threats to the industry has also taken over Radhe and being a Salman Khan movie, the piracy too is at an all time high. Salman Khan, time and again has urged fans not to watch it through the pirated sites and not to partake in any sort of pirated activities.

The piracy has definitely brought in a significant amount of attention as even Salman Khan, took to his social media and released a statement saying legal actions will be taken against those who have been running these. Following that, today ZEE has released an official announcement on the matter.

ZEE has gone on to mention that networks in messaging apps like WhatsApp and Telegram are the root cause of piracy at the moment and that the company Cyber Cell along with the Cyber Crime team are tracking down the phone numbers that are in any way connected with it.

The two page official notice from the company has urged fans to not go ahead with any kind of pirated viewing of Radhe. Along with, it also clarifies how piracy affects the people related to the film business in some way or the other. Keeping this in mind, the officials are working hard to bring down those who have gone ahead and released the movie on such platforms and also sites.

Piracy has been a menacing issue for all the movie industries. Radhe has been released digitally at a very reasonable price for people to watch. Even with all these, watching a pirated version doesn’t make any sense at all.

Take a look at the official notice released by ZEE 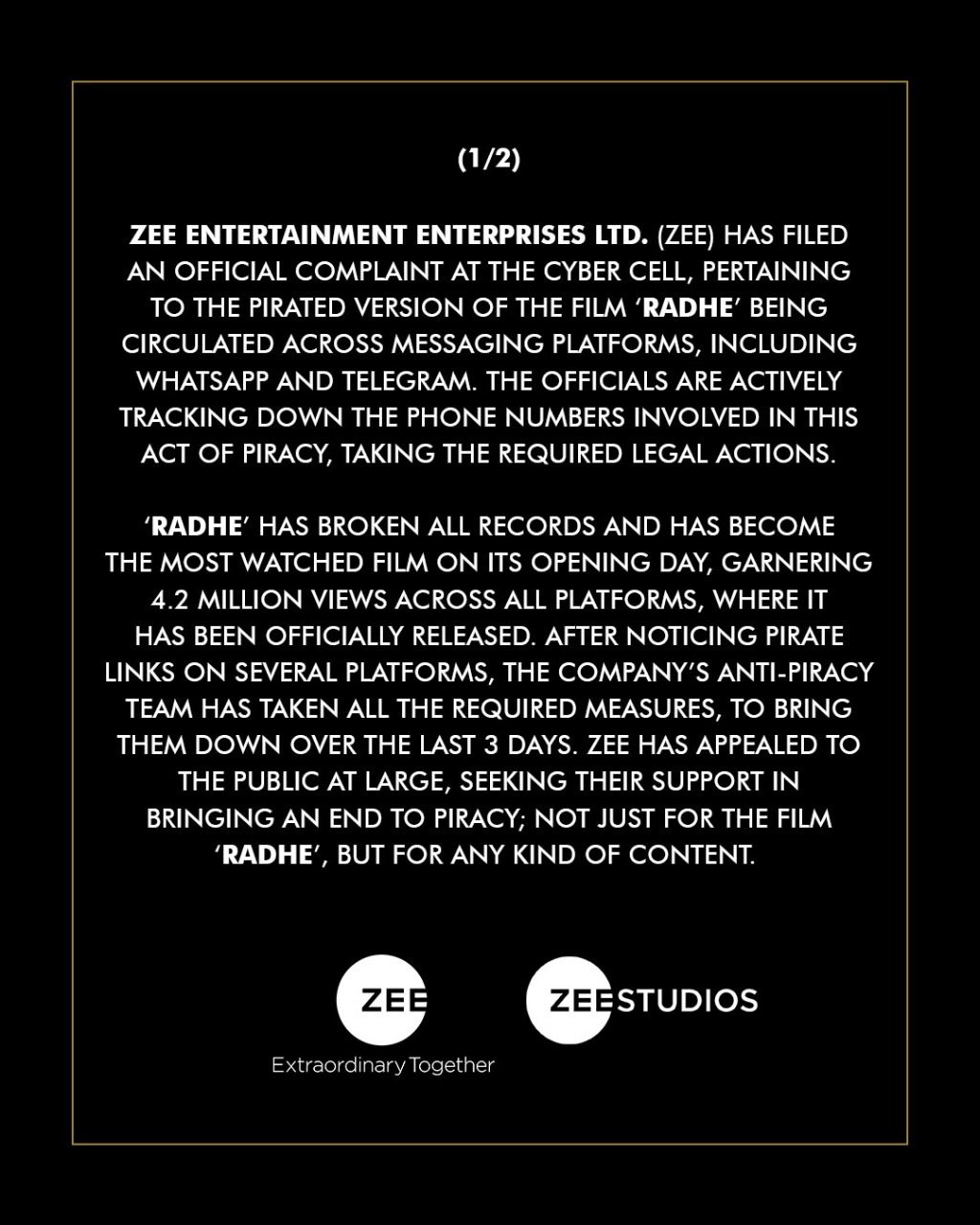 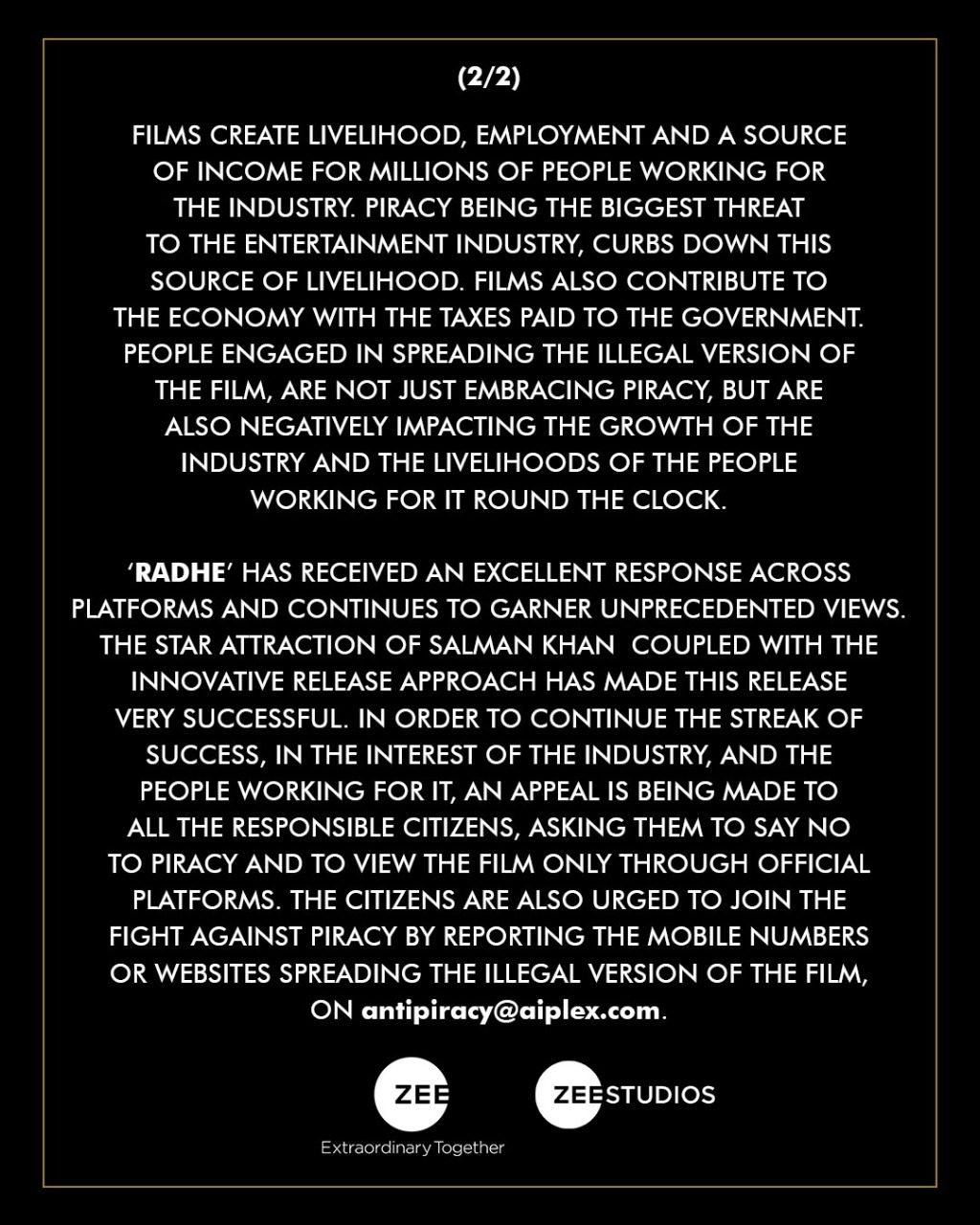