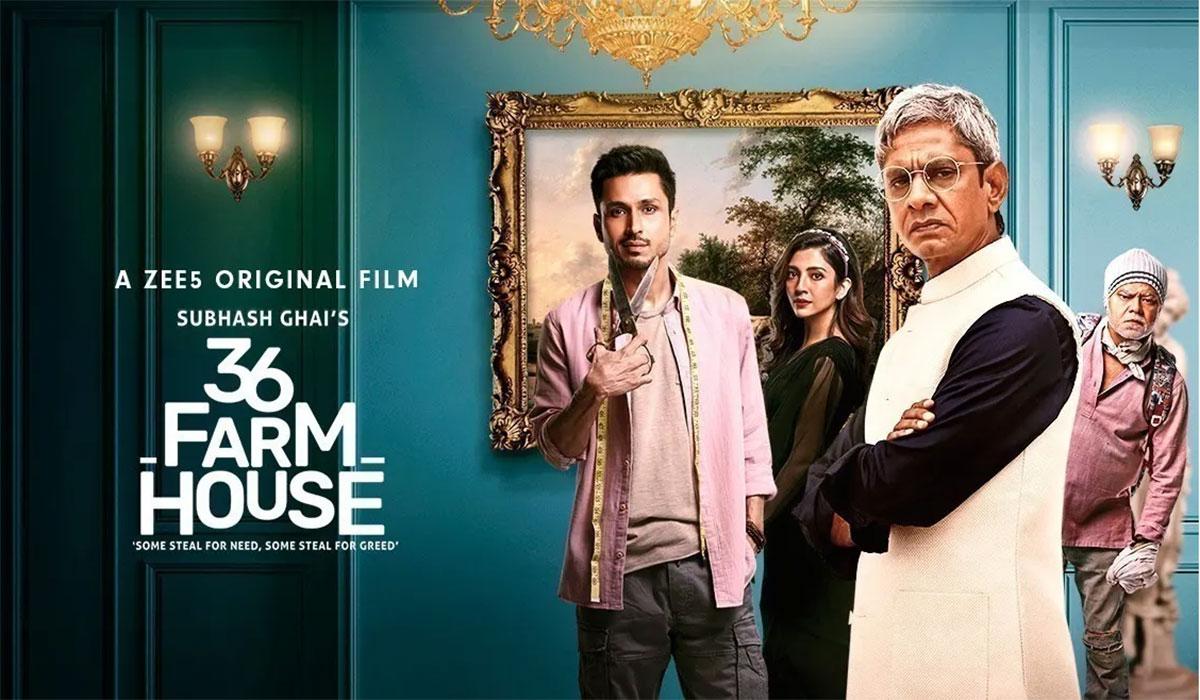 The Singh family siblings are in a dispute over property rights. They do their best to sway their mother’s mind to get all rights. Raunak (Vijay Raaz) desperately needs the will to be in his favour. What does he do to get it is the movie’s basic plot.

Amol Parashar playing the lead is lacklustre. He is alright in some lightweight funny moments, but that’s it.
An important sequence during the pre-climax portion where Amol Parashar requests for a party is enough to show how his weakness. The abysmal writing also doesn’t help his cause. He is the primary reason for the bland vibe of the movie.

Veteran director Subhash Ghai’s protege Ram Ramesh Sharma directs 36 Farm House. It is a comedy with elements of thriller and drama thrown in. Unfortunately, the result is anything but funny or thrilling.
Over the last two decades, Subhash Ghai has lost his mojo completely and is a mere image of his former self. He has made a few flicks during this phase that are outdated and lack the qualities that made him so popular in his heyday. 36 Farm House, therefore, isn’t helmed by him. But, he provides the story, dialogues, music and lyrics.
The opening sequence is enough to suggest 36 Farm House is going nowhere, and that Subhash Ghai mark is dominating the narrative. The story of brothers fighting over property and attempted murder are all themes from his past work. The attempt is to modernise them, but the output falls flat as it is headed nowhere.
The subsequent scenes establishing the comedy narrative are as bland as it gets. Even talented actors like Sanjay Mishra and Ashwini Kalsekar couldn’t do much.
The setting of a mansion and murder is alright, and so is the murder angle. But, it’s the way it is executed that leaves a lot to be desired. There is a stage drama feel to the whole thing. The low-class people entering the mansion angle is also not utilised well.
The outdated thoughts could still be given a pass had the narrative been smooth and there was a decent end to the suspense. Well, even that is not the case. The shift between comedy, drama and suspense is jarring and the finale is a damp squib.
Overall, 36 Farm House is Parasite meets Knives Out with outdated kitsch and bland execution. It is a forgettable fare with nothing redeemable.
Other Artists?

Barkha Singh is a perfect match in blandness to Amol Parashar. She lacks charm and warmth to make the role work.  Some of her scenes with Amol look like part of an acting workshop. Only it’s a bad day at the school.

The senior actors Vijay Raaz, Sanjay Mishra, and Ashwini Kalsekar are the only reason one might be interested in the movie in the first place. However, even they are riddled with poorly written characters that are clueless in their actions.

Subhash Ghai, besides providing the story and dialogues, has also given the music. The cinematography is better considering the limited locations and singular space. The editing could have been better. Some trimming is necessary to keep the narrative sharp. The writing is poor.