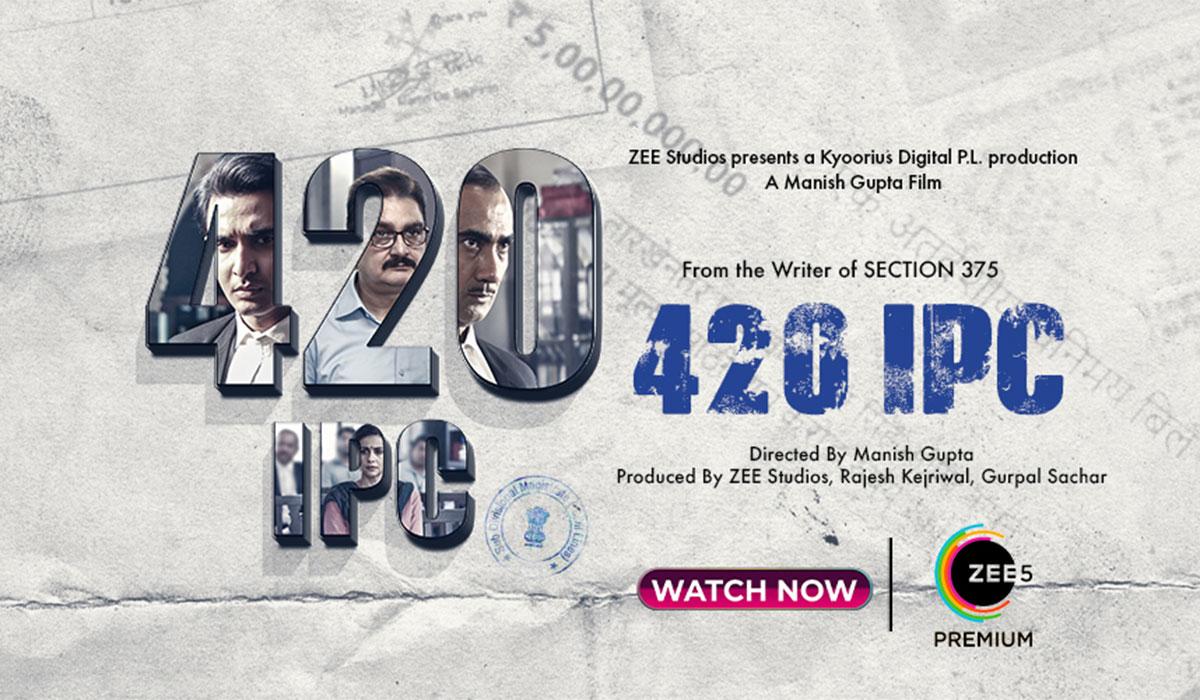 Skin N Swear: A Cuss Word At The End

CA Bansi Keswani (Vinay Pathak) is a typically middle-class guy working hard to clear a house loan. One day, he is arrested on charges of forgery and fraud. He hires Birbal Choudhary (Rohan Vinod Mehra) to fight his case.

What looks like a simple case on the surface gets complicated with simple, unexpected revelations. Did Keswani get out of jail? Or are there any twists in the tale, comprises the narrative of the courtroom drama.

420 IPC has limited characters and settings. However, those part of the film is seasoned actors like Vinay Pathak, Ranvir Shorey, and Gul Panag. They deliver with their acting and keep the narrative engaging throughout.

Ranvir Shorey easily stands out among the three. He puts in classic old-school lawyer act. It was bordering on caricature, but he manages to make it appealing. There is an air of honesty around the persona that is excellently conveyed.

Vinay Pathak plays a typical part which he has done many times in the past. It stays that way for a large extent, and then comes a change. The actor effectively showcases the subtle differences.

Gul Panag appears sidelined for most of the duration. It is only towards the end that we see her emotional side. It is alright.

And last but not least, Rohan Vinod Mehra literally appears like a kid in front of the actors above. But, he does his job sincerely. Yes, it could have been spiced up a bit and could do well with a little bit of charm. Nonetheless, it goes well with the overall minimal and simplistic tone of the movie.

Apart from these four, there are a few smaller parts, and the actors doing them (Arif Zakaria etc.) are adequate for the roles. They don’t particularly impress, but nothing is spoiled, either.

Manish Gupta directs 420 IPC. It is a simple courtroom procedural drama without any big twists or complications. The idea is to engage the audience through a gripping narrative, and the director succeeds mostly.

Despite a concise length, the initial setup of the premise looks lengthy and tiring. It is mainly due to the limited locations and repetitiveness. One feels no progress happening for a long time, like a stuck record. However, if one patiently follows the proceedings, there are a few planting is done that are later used as red-herring in the plot.

The real drama kicks in when Keswani is arrested for forgery and fraud, and the court proceedings commence. The narrative immediately becomes gripping. It is due to the writing. The writer clearly knows what they are doing, and it shows. If you are wondering, it comes from the people behind Section 375.

The courtroom proceedings are where the narrative of 420 IPC comes alive. They are gripping despite the simplicity of the whole thing. A tough nut to crack prosecutor part is the reason for this. The ‘simple’ stakes are escalated to the arguments.

The non-courtroom proceedings are a drag and take a formulaic route as well. Still, they don’t spoil interest as they are short.

Despite the gripping quality, the narrative looks done after a point. A twist is rightly placed at this point which brings a whole new spin to the case. It will be decisive in how one perceives the movie in its entirety. The twist, if liked, will make 420 IPC a slightly better than passable fare. If it doesn’t, then it would be a strictly passable one.

Overall, 420 IPC works well as a courtroom drama. It is gripping in parts with solid actors playing their roles well and good writing. Give it a try if you like to watch movies in the genre.

The music is forgettable, whereas the background score by Ranjit Barot and Som Dasgupta is repetitive. One gets a feeling that the same thing is repeated on loop. Not much is expected anyways from the cinematography, given the low-budget production. The work by Arvind Kannabiran and Raja A Chakravarti is okay if one has that in mind. The editing by Archit Rastogi could have been better. The writing, as mentioned previously, is a significant asset to the story.

Yes, But With Little Reservation