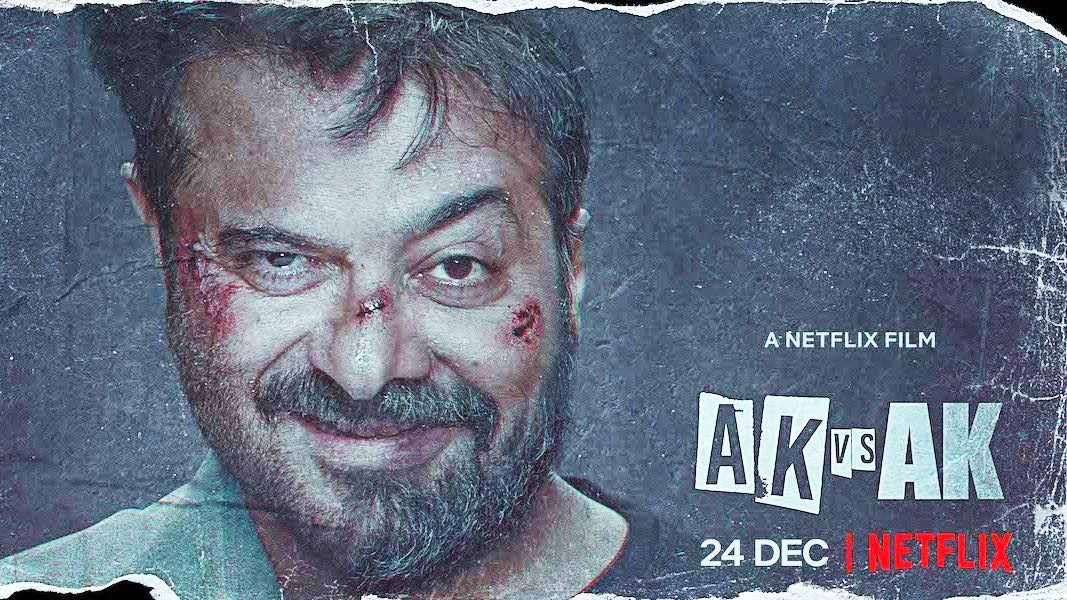 BOTTOM LINE: A Bizarre, Erratic Film That Is Fun To Watch

Netflix’s latest Indian Original movie ‘AK Vs AK‘ is a meta film, and gives the viewer the feeling of watching a film within a film.

An aging Bollywood superstar (Anil Kapoor) and a young upstart director (Anurag Kashyap) clash on stage during a penal discussion at a prestigious film festival. The director is incensed enough to throw a glass of water on the superstar’s face – an act that makes him persona non grata in the film industry. Anil Kapoor and Anurag Kashyap play themselves as the two protagonists, hence AK vs AK.

Doubly enraged with the treatment meted out to him by his beloved industry, the director hatches a bizarre plan to get back at the superstar. He kidnaps the superstar’s daughter (Sonam Kapoor) giving him until sunrise – a total of 10 odd hours – to hunt for and find her. His motive – to get the actor on his knees, while capturing the entire search on his camera to create a film that is as raw and real as it can get; along with proving a point – that in filmmaking, directors reign supreme.

Anil Kapoor, playing a meta characterisation of himself, proves yet again that he’s the classic vintage wine of the film industry – getting more refined as he ages, turning in performances that are fine and full-bodied. In AK Vs AK, he’s a sight to behold – impassioned and impertinent, full of vitality and vivacity that belies his age. Surprisingly, Anurag Kashyap matches him step for step, nuance for nuance, affirming the fact that good directors certainly make good actors. Together, the two create magic on screen with their palpable chemistry, despite the fact that they’re at loggerheads throughout the run time of the movie.

Sonam Kapoor doesn’t have much to do in the film. Harshvardhan Kapoor, Anil Kapoor’s son, pops in for a fun cameo – it is one of the most entertaining portions of the film. Yogita Bihani is virtually unrecognisable from her Alt Balaji web drama Dil Hi Toh Hai. She puts in an adequate performance as Kashyap’s chief cameraperson. She too plays herself in the film.

AK Vs AK has a bizarre plot at its core – one that is impossible to believe. Whatever the persona cultivated by Anurag Kashyap over the years — sullen and uptight, cocks a snook at the establishment, gets into Twitter spats with fellow industry folk — one can never ever think him capable or unhinged enough to pull off the bizarre plan he hatches in AK Vs AK. The plot thus begs considerable suspension of disbelief on the part of viewers before one can delve further into the narrative. Anil Kapoor’s part, on the other hand, is quite believable; even his tone and tenor in the delivery of dialogue is consistent with his real-life persona.

The initial plot is quite hard to believe, taking on the sensibilities of a conventional kidnapping drama in the beginning. It is what happens later, when AK sets out on the wild goose chase to hunt for Sonam, that gives credence to the film’s inherent meta identity.

The narrative is peppered with delectable references from the characters’ pasts. Anil Kapoor and Anurag Kashyap’s real-life past history is invoked several times throughout the narrative – they actually had a film called Alwyn Kalicharan in the works that was eventually shelved. Anurag Kashyap, who’s written the dialogues of AK Vs AK, constantly lampoons his personal body of work in the film, and even his own identity. His brother Abhinav Kashyap’s commercially successful Dabangg is invoked several times. Twice in the film, people confuse him with Anurag Basu and Madhur Bhandarkar. Director Vikramaditya Motwane also takes potshots at himself, more specifically, his barely-known flop film Bhavesh Joshi Superhero, as does Harshvardhan Kapoor, the star of that film. It helps that that film was also written by Anurag Kashyap, adding a delicious nuance to the storytelling of AK Vs AK when you think about it.

The narrative brims with fun factors, witty repartee, intelligent humour and the snarkiest writing of recent times. Yet, the narrative borders on erratic inconsistency at times, taking away some of the sheen of the glittering writing. Some portions are a drag. The hunt for Javed, for instance – it stretches on and on, getting on your nerves after a while.

That said, writer Avinash Sampath and director Vikramaditya Motwane weave a significant, path-breaking story that transcends conventional narrative and steps into the realm of the extraordinary. It is a fun ride, not the kind that leaves you scratching your head over what unfolds on screen. It offers a wealth of hidden nuances for film-lovers to discover and unravel – the insider-outsider debate of recent times; the fickleness of audiences; the ephemeral nature of one’s importance within the industry; the propensity of the Indian viewer to stick to watching tried and tested formulaic films – anything unconventional or experimental is bound to flop – like Bhavesh Joshi Superhero – these and a gazillion other inferences, just waiting to be discovered.

Swapnil Sonawane’s brilliant camerawork is the mainstay of AK Vs AK. Edgy at times, indulgent in others, it captures the meta style of storytelling with flawless perfection.

The music of the film is as experimental as its plot. The rap number belted out by Anil Kapoor is peppy, snooty and a celebration of his superstar status.

The refreshingly experimental nature of the film

Erratic and inconsistent at times

Draggy, over-stretched portions in between