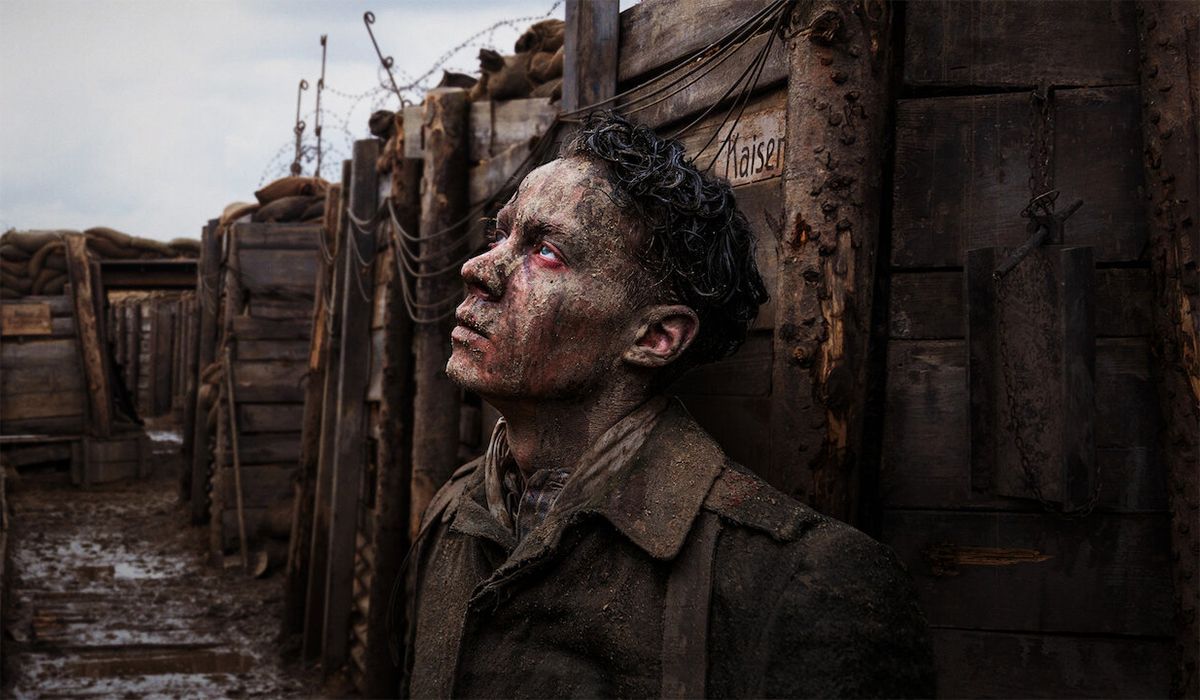 All Quiet On The Western Front is about Paul Baumer and his school friends, Albert Kropp, Franz Muller, and Ludwig Behm, who are all suddenly put on the war front. The war’s reality and survival form the movie’s core story.

Meanwhile, a set of higher officials from Germany have different viewpoints on war. How their decisions affect the lives of those soldiers at the front also forms an integral part of the storyline.

Felix Kammerer as Paul Baumer is thematically the lead of the movie. It is through his character that the central message of the film is delivered. He has done a commendable job showing different emotions with ease and depth. The character arc comes out neatly at the end and leaves a strong impact.

Many more intense moments are present throughout the narrative, like Felix’s reaction after stabbing an opposite camp soldier. Or when his friends and colleagues meet their unfortunate fates one after the other. It makes his act memorable.

But Felix is not the only actor with a solid and impressionable part. Others, like the ever-reliable Daniel Bruhl, come up with another measured and restrained act. Thibault de Montalembert, Albrecht Schuch and others also register with their distinctive, relatable and compelling actions.

Edward Berger directs All Quiet On The Western Front. It is a war movie set in World War One times based on a Novel of the same name as the film.

Two things that stand out immediately are the great making and the slow pace. The good thing is the former compensates for the latter in All Quiet On The Western Front.

The reality of warfare has been captured brutally realistically. The slow pace and locations make the viewers feel like they are part of the whole situation as observers. The anti-war theme, therefore, serves the right purpose here by showcasing all the bloodshed and goriness.

Still, no matter how wonderfully shot and technically superior, a film is always about that emotional human connection and relatability. All Quiet On The Western Front achieves that and more with its execution.

Some parts definitely test patience, and there might be people who have no interest in history; the film is not for those. All Quiet On The Western Front is for those who have an appetite for such genres and dramas. Or those interested in world politics follow the Russian versus Ukraine war and other such geopolitical issues.

The movie is not all about war and cruelty on the battlefield. It also depicts the same in closed corridors and the amongst the officials. They are equally responsible for the whole situation, and unimaginable losses are neatly highlighted by the additional bureaucratic layer to the proceedings.

There are many gut-wrenching visuals that are sure to make even the most stone-hearted squirm in discomfort. They are shot and presented in the most aesthetically impactful way possible. This convergence of style and substance makes the anti-war message pay off in the end.

Overall, if you like war dramas and movies dealing with history in all its brutality, do give All Quiet On The Western Front a try. It is extremely slow-paced but manages to hold the interest nonetheless.

Volker Bertelmann’s music enhances the appeal of the already staggering visuals. The harrowing quietness or the blasting tension; music adds to the effect. The sound design is terrific as well. It helps one instantly transport into the world.

James Friend’s cinematography is brilliant. The shots, wherever paused, look like a painting. The editing is neatly done. The slow pace is an issue, but it has been deliberately done to provide the desired impact to the viewers. The writing is alright, in general. There are some parts which do stand out.

All Quiet On The Western Front Movie Review by Binged Bureau