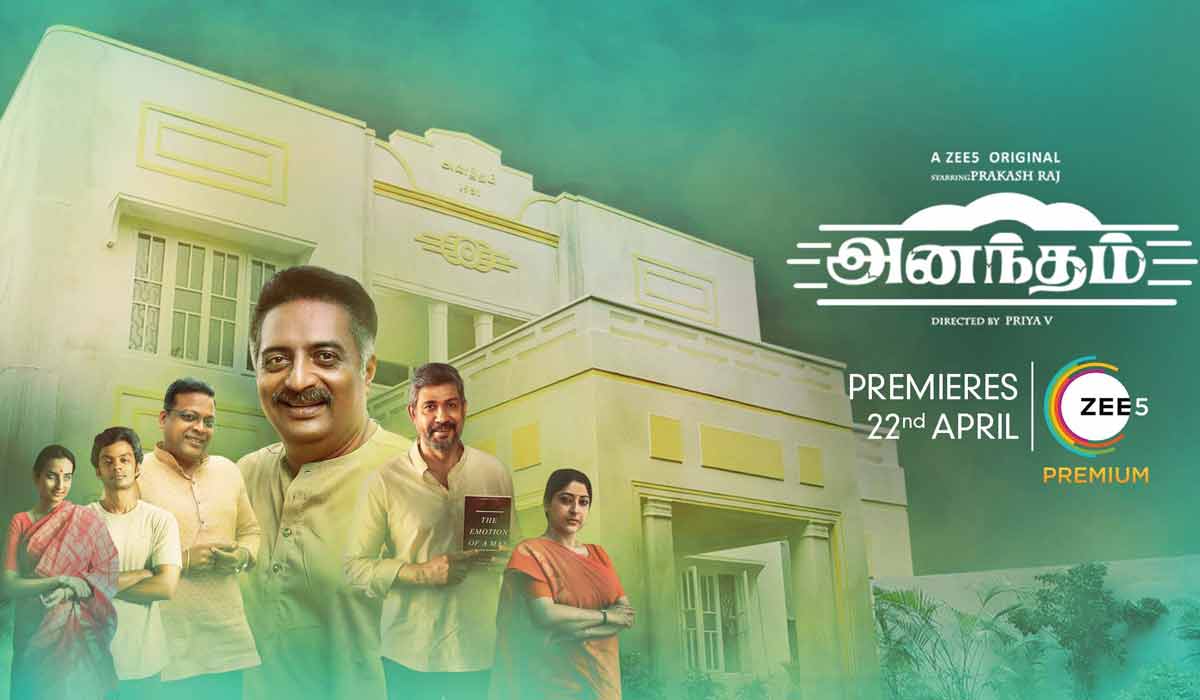 BOTTOM LINE: Appealing Despite The Issues

Anantham is a hyperlink narrative with a namesake house being the story’s centre. Over the course of decades, many tenets stay in Anantham. The primary storyline is how Ananth (Sampath Raj), son of Venkatesan (Prakash Raj) returning home after decades, finds all the buried stories and brings them out.

Ananth and Venkatesan haven’t spoken to each other in decades. What is the reason and how their story ends, shape the overall plot.

The primary performers of the series are Prakash Raj and Sampath Raj, playing father and son. The terrific actors show their wide range as the series gives them enough scope via a compelling core drama. Nothing is new in the situation, but the way they clinically go through it, understatedly and with intensity, is the highlight.

With Prakash Raj, we have seen him do similar (or dare we say the same) acts over the years across various languages. He is solid, no doubt, but there is hardly any surprise. The small body language moments, the minute expressions highlighting anger or aversion or sadness – we have seen it all before, but it all works nonetheless.

Sampath Raj comes across as refreshing mainly because one hasn’t seen him in such a role regularly. Anger comes naturally and has been used many times before; it is the other comforting emotion related to joy, pleasure and sorrow that brings wholesomeness to his part. Together, they are a treat to watch and a mainstay of the project.

V Priya writes and directs Anantham. It is almost like an anthology series if not for the common connection between the father and son and the latter tracking down the stories.

The beginning of the series is almost like a Television serial. The vibe, the setting, the actors and the dialogues give us that vibe. The same is continued when we get to the house’s actual ‘first story’. The background score and fun and drama, everything has a touch of the serials from the golden age. It is why, despite the extreme predictability, one goes through the proceedings without minding it.

However, as we progress to the next episodes, it gets clear where Anantham is heading and what it aims. Anantham becomes a microcosm of India where the different issues are seen. Each episode picks one and mostly deals with it in a rounded and progressive way.

The problem, as it turns out, is the issue itself. After a point, they get formulaic as narrative. Also, there is noting groundbreaking in the way they progress. The warmth and sadness being presented earnestly is the main calling card here. It works to an extent in a few episodes, but the same approach doesn’t give the desired results in a few cases.

The core conflict also doesn’t hold any surprise. After all the buildup, the reason seems alright story-wise, but it leaves a mixed feeling or slight disappointment as a viewer. The ending also has an abruptness.

Overall, Anantham is a lengthy and predictable series, but what makes it appealing is the consistent acting and engaging drama. If you like some simple yet bold stories with a bout of nostalgia, give Anantham a try.

One of the significant assets of the series is the casting. It is brilliant. Every actor seems perfect for the part and does well and leaves a mark even if they go overboard a bit. Indraja, after a long time, is seen playing a sensible and classy role. She is effective in the role, especially in the character’s final moments. Aravinth Sundar and Samyuktha evoke the love-hate chemistry neatly.

Amrutha Srinivasan is effective as the intelligent blind woman, whereas Ananth Nag and Anjali Rao are adequate in their respective parts. Lakshmi Gopalaswamy, Vinodhini and George Kora generate the right warmth in their segment with Ananya Ramaprasad alongside. Mirna Menon stands out in a cacophonous story. The rest of the actors are alright in their respective roles and add to the proceedings.

The background score by AS Ram is mostly excellent. A few episodes have a vintage appeal to them due to work done by the music director. The cinematography could have been better, though. Bagath’s work is the reason why there is a serial vibe from the start. The editing is neat and goes well with the content. Sathish Suriya keeps the pacing moderately slow, but it doesn’t become an issue unless there is an extreme routine content. The writing, as mentioned previously, is superb. Along with the casting, it is the reason for the appealing nature of the series.

A Couple Of Episodes Feel Forced

Yes, But With Little Reservation