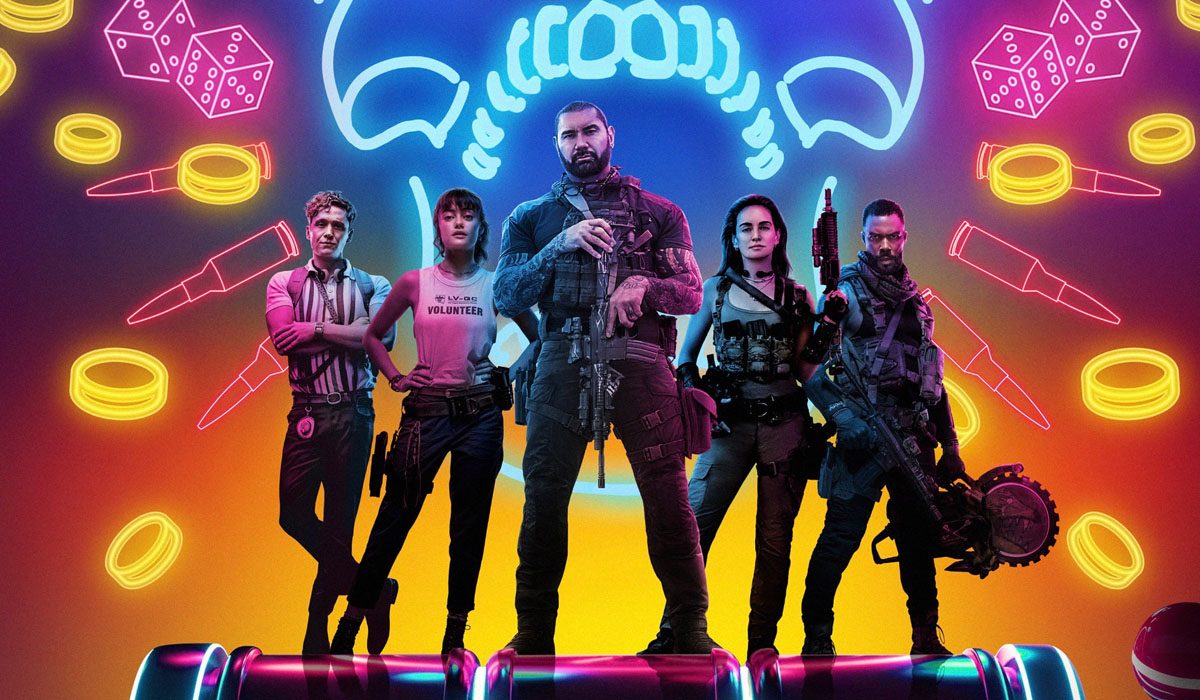 BOTTOM LINE: A Zombie & Heist Thriller With Zombies Aplenty But Barely Any Thrill

After his superb ‘Dawn Of The Dead‘ reboot, Zack Snyder revisits the zombie genre in Netflix’s Army Of The Dead.

Las Vegas has turned into a ghost town, or should we say, zombie town, after being overrun with zombies. A bunch of people, led by Scott Ward (Dave Bautista), was able to fight the zombies in the last face off they had; and lived to tell the tale. For that reason alone, the same bunch is recruited by Vegas casino-owner Bly Tanaka (Hiroyuki Sanada) to get his $200 million stashed in the casino’s basement vault, in exchange for $50 million, which Scott can divide among him and his team as he deems fit. Scott agrees, and soon, the zombie-busters are on their way to an all-out man vs zombie war. Only thing is that there’s a sinister angle to the plan that will ultimately spell doom.

Army Of The Dead has been written and directed by Zack Snyder. He’s also Director of Photography on the film.

Dave Bautista’s Scott Ward has the lion’s share of the screenplay, and he does complete justice to the part. He keeps audiences invested in his character whenever he’s on screen. Matthias Schweighofer as safe-breaker Dieter, Tig Nataro as helicopter operator Marriane,
Omari Hardwick as Vanderohe, and Raul Castillo as zombie-killing Instagram sensation Guzman are cast well and fun to watch.

None of the other members of the cast makes any lasting impression on viewers – and understandably so – what performing skills would any actor need to simply go bang-bang at silly zombies with guns and armour, almost the entire time they’re on screen. Ella Purnell, as Scott’s daughter Kate, is average.

Huma Qureshi impresses in her minuscule though crucial role. She’s one of the few from the cast who catches the eye with her performance and screen presence.

Being a Zack Snyder film, and a zombie thriller with an interesting premise at that, we had a lot of expectations from Army Of The Dead. Unfortunately, the film fails to live up to the expectations it built in the run-up to its release. The zombies in the film are more silly than scary. They never seem terrifying or threatening at any point in the film. Instead, they die like flies at the hands of the zombie-fighters – even at the hands of the untrained safe-breaker Dieter.

To top it all, there are two categories of zombies that have laid claim on Vegas. One are the slow, shuffling Shamblers. They’re unable to think, hibernate most of the time, and are hardly a threat. The other – the Alpha zombies – are the dangerous kind. They can think, feel, love, and even reproduce (!!). They move with lightning agility and have sentient intelligence – a very different breed of the undead.

The zombie tiger ‘Valentine’ and zombie horse remind you of the White Walkers’ horses and the undead dragon in Game Of Thrones – they give the same vibes and spookiness. The action sequences in the main gambling hall of the casino are high-octane and compelling – a great watch, we think. The sequences when Dieter attempts to crack the casino safe are funny and well-constructed; and the zombie attack on them immediately afterwards is well-shot. Both are easily the best portions of the film.

Some of the sub-plots are sillier than one can imagine. To add to the silliness, they are poorly devised and crafted, thus being completely ineffective as a means to engage, shock or impress – the WMD plan, for instance. It sounds like a throwaway comment made in jest, when mouthed by the shady Martin; not to say, it is an utterly inane plan.

The film is all about blood, gore and mindless violence, nothing that really sets it apart from any B-grade zombie film. The screenplay didn’t need a Zack Snyder to bring it alive – any second-rung director would have done.

The end is dull, drab and lacking in any real emotions. The father-daughter relationship between Scott and Kate leaves one unmoved. The humour in the film is like a breath of fresh air – it gives the zombie drama a not-so-serious vibe, letting one go with the video-game like flow of the film – giving it a fun element rather than keeping viewers on edge all the time.

The best part of the film is the opening sequence, set to a funky version of Elvis Presley’s Viva Las Vegas. How we wish Snyder had carried over that vibe to the entire runtime. The film fittingly ends with the ‘Zombies’ number by The Cranberries – a number all of us must have crooned at the top of our voices in our teenage years.

The camerawork, by Zack Snyder himself, gives a unique surrealism to the film’s zombie sequences. Snyder has used the Canon ‘Dream Lens’ to shoot the Vegas sequences, which has the unique quality of giving the shots a surprisingly shallow depth of field, blurring out the background and letting the subjects in focus leap out of the frames in prominence and astonishing detail. It’s quite amazing to, time and again, watch the zombie tiger, and the self-appointed King and Queen of the Alpha zombies in stark focus.

The music of Army Of The Dead is upbeat and eclectic. Several Elvis Presley numbers make their presence felt, starting with the fun cover version of the Viva Las Vegas number. The film is studded with songs that are chosen well to superbly fit the narrative in its various nuances. Peppy soundtrack in the action sequences add to the videogame-like quality of the film. Tom Holkenborg has composed the original soundtrack of the film, and he’s done a fantastic job of it.

Shoddy writing that never draws you into the narrative

It is an average watch

As a one-time watch. Video game junkies will enjoy the blood and gore-laden bang-bang sequences

Army Of The Dead Review by Binged Bureau