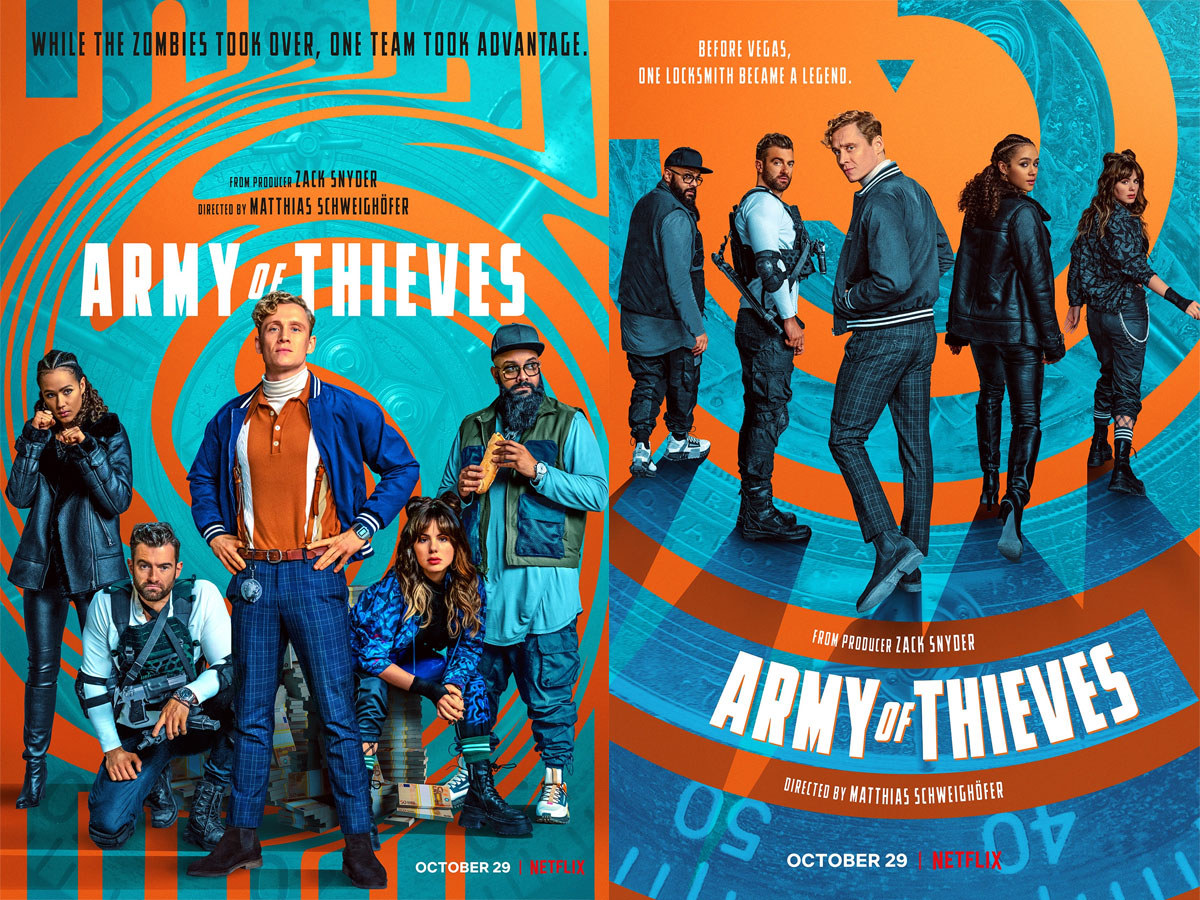 BOTTOM LINE: A Decent Heist Film Bordering On The Unrealistic

Skin N Swear: Some skin and some swearing

Young Sebastain Schlencht-Wöhnert is a bank teller living a mundane life in Potsdam, Germany. He goes to work every day, performs his 9-5 job and then goes home and turns in early. Safecracking – an art form which he has been theorizing and perfecting for years is the only thing that he is passionate about. But his only outlet – his videos which he uploads on his YouTube channel, does not pan out to anything. Well, not until he gets a mysterious invite to a special competition specifically for safecrackers. Is he going to go for it? Most likely, yes. But is he ready for it? Not likely.

This ‘Army of the Dead’ prequel is surprisingly entertaining and one of the best parts of Army of Thieves is the cast. Matthias Schweighöfer reprises his role as Ludwig Dieter – or shall we say, before he became Ludwig Dieter. Matthias gives us a very convincing performance of a young man ready to live mediocrity behind – and he is also the film’s main comedic outlet. His ridiculous screams and overly enthusiastic “prep” movements are not as irritating as they should be and that is the work of a good actor. Nathalie Emmanuel could have been replaced by any beautiful actress for this generic role, but the British actress makes the role her own and gives the character some unexpected depth.

Unlike ‘The Army of the Dead’, Army of Thieves is more “heisty” – mainly because this film has a total of three heists. Not counting all the unrealistic moments on screen and some blatant plot holes, this film is a great one-time watch. You do not need to know anything about the first film, the previously mentioned ‘Army of The Dead’ to know what is going to happen in this movie. A great prequel which is a decent standalone film on its own. Well done, Matthias Schweighöfer – you have directed a decent action-comedy flick.

Still, the film has its problems. Again, not looking at the highly unrealistic set of characters who are extremely beautiful and are quite proficient in their fields and even ignoring the weird “safe-cracking competition” – the film is filled with loads of plot holes. The time when Sebastian is abandoned by the crew; it doesn’t make sense that Gwen and Korina reached Sebastian’s house before he even did – especially since he was in a city and they were in the middle of nowhere. And it makes no sense that the Interpol didn’t catch him earlier for this very reason.

The ominous zombie dreams kind of come out of nowhere and Korina’s explanation of them at the end – which is supposed to be profound or prophetic, doesn’t seem to really land. It sounds dumb to the viewer who has watched the first film and sounds like blatant foreshadowing for the ones who haven’t watch the Zack Snyder zombie feature. Also, Sebastian knows a lot about Gwen’s life – but they knew each other, for a maximum of two weeks. It doesn’t make much sense.

But the film has its good moments as well. Sebastian and Gwen’s attraction for each other doesn’t seem too forced. Sebastian has always been a master of his craft and Gwen has always wanted to do something in her life, similar to what Sebastian achieved with his safe-cracking. The motivation behind each character can be seen onscreen and the scriptwriter has done well to write these characters. Even the fictional locksmith, Hans Wagner has a good backstory – and that keeps us interested throughout; even during the semi-boring vault opening moments.

Overall, Army of Thieves is a good one-time watch. The premise of the film gets you invested in the film while the casting, acting and final direction gets you to the end of the film. There are a few onscreen hiccups, but the film manages to work all the way till the end. And the movie is surprisingly funny as well.

The film manages to cast well and the rest of the actors perform their roles with some nuance. While Brad kicking Sebastian out the van might seem idiotic, he was a jealous idiot and it makes sense – Stuart Martin does a good job. Rolph is the other character who was supposed to be the comedic relief and his portrayer, Guz Khan is definitely funny. Ruby O.Fee doesn’t do much onscreen but she does give some depth to Korina. And surprisingly Noémie Nakai and Jonathan Cohen have surprisingly good chemistry on screen as a pair of Interpol agents. I wouldn’t be surprised if we get a spinoff film based on these two characters.

While the music and cinematography is top notch, the director, Matthias Schweighöfer deserves a mention for his brilliant work. While his acting was good (and the casting director did some good work finding some likeable actors), his final direction made the film much better than it could actually have been. His editing and graphics team all deserve a mention, while the scriptwriter, Shay Hatten has written a pretty decent script.

Yes, if you have time. Or liked Army of the Dead.