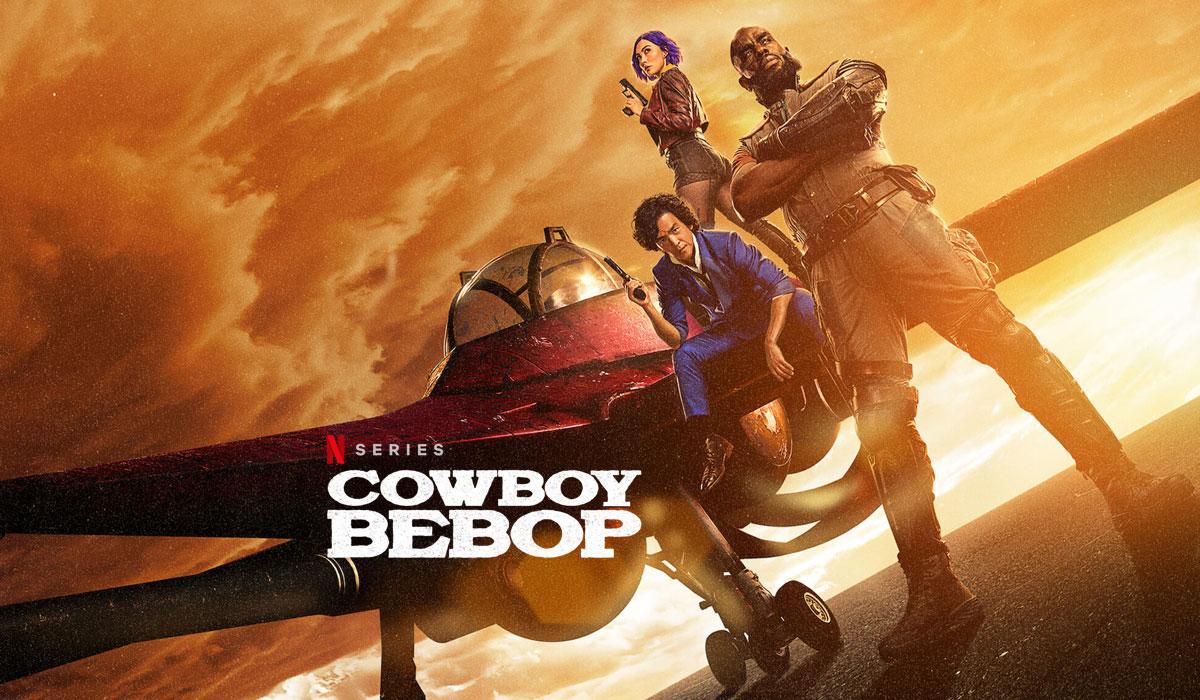 Skin N Swear: Some swearing, some skin and some blood.

Spike Spiegel and Jet Black are two bounty hunters AKA Cowboys that are travelling through space to find the galaxy’s worst criminals. They face unexpected dangers along the way, while picking up a couple of “strays” as well. However, Spike’s dangerous past seems to be catching up to him – with his crewmates none-the-wiser. Will Spike reveal his secrets to Jet? And just who is Vicious?

While the original anime, Cowboy Bebop, was all about the story, action and the voice actors, this series seems to be lacking in the former department – the most important one. Still, what makes this show so fun to watch are the epic characters, thanks to a brilliant cast.John Cho is not perfect as Spike Spiegel, but he does a tidy job in portraying a character almost half his age. But he looks the part and pulls off some really good action sequences onscreen. Mustafa Shakir is surprisingly “homely” as Jet Black. The actor portrays the character as a father/older brother figure among the crew – while having a good onscreen bromance with Cho’s Spiegel. Elena Satine starts off tiring to watch as the damsel-in-distress, Julia – but her turn as the villain comes out of nowhere and the actress manages to pull it off. Alex Hassell as Vicious, however, could have been better. Sure, the actor does a decent job with the script he was given – and is quite good while portraying vulnerability in the penultimate episode; but it feels like the actor was terribly miscast.

Daniella Pineda, however, is the best actor on screen. While many would expect her character of Faye Valentine to be somewhat irritating, Pineda is exactly the opposite and quite memorable. Her exclamations and comedy chops pushes through some slowly paced portions of the show and adds soul to a surprisingly soulless show.

Story, action, comedy and actors are the main driving points of this web series. The action is decent, while comedy is average. While Cho is funny and Pineda is hilarious, many jokes fall flat in Cowboy Bebop and could have been better. The action is fun to look at – but ultimately lacks soul and most of these sequences seem to be added on because the script demands it. The cast of actors are pretty good, except for the previously mentioned Hassell but our main problem is the story – and how it is dragged on in ten episodes.

While ten episodes doesn’t seem like a lot, most of the episodes are an hour long and it becomes impossible to follow the main story when there are too many side characters and Easter eggs to keep track of. The pacing is also off putting and for a show that was originally made in 1999, Cowboy Bebop doesn’t adapt its story for the year 2021 (or 2020, when it started filming). And on top of that, the main story isn’t even all that interesting except when Julia decides to take control of the Syndicate.

However, the side plots are somewhat decent. Jet Black trying to track down the man who got him fired as a cop and his moments with his daughter are great to watch on screen, while showing Faye’s lighter side and having her tracking down her identikit also provides some depth into her character. Spike, Jet and Faye “teaming up” in episode one to collect the bounty of a young couple (in the very first episode) is also interesting.

Music is a big part of Cowboy Bebop. The theme song is adapted from the 1998 anime original, but the composer has changed it up quite a bit – and it is still iconic. The show gets slow in between, so the music helps with the pacing. Cinematography and art style of the show is pleasant as well.

Overall, Cowboy Bebop is a decent watch that could have been better if the screenwriter had taken his time to make a better script. While the show is aesthetically pleasing, it lacks soul and loses its way midway. But the cinematic style and Pineda’s portrayal of Valentine help push the film forward.

Mason Alexander Park is unforgettable as Gren, while Tamara Tunie’s Ana is iconic. Molly Moriarty is quite cute as Kimmie Black as well. Rachel House is intimidating as Mao, but the show stealer among the supporting cast has to be Blessing Mokgohloa and his portrayal of Santiago. The actor gets barely any screen time, but he is brilliant during those few minutes.

The music stands out… and no wonder; composer Yoko Kanno who scored the music for the 1998 animated version of Cowboy bebop returned for the live action show. She does a brilliant job and helps keep the show’s tempo high. The cinematography style, editing and direction deserves a mention as well – but the screenplay needs work, a lot of work.

Technological Plot holes Too Many Episodes