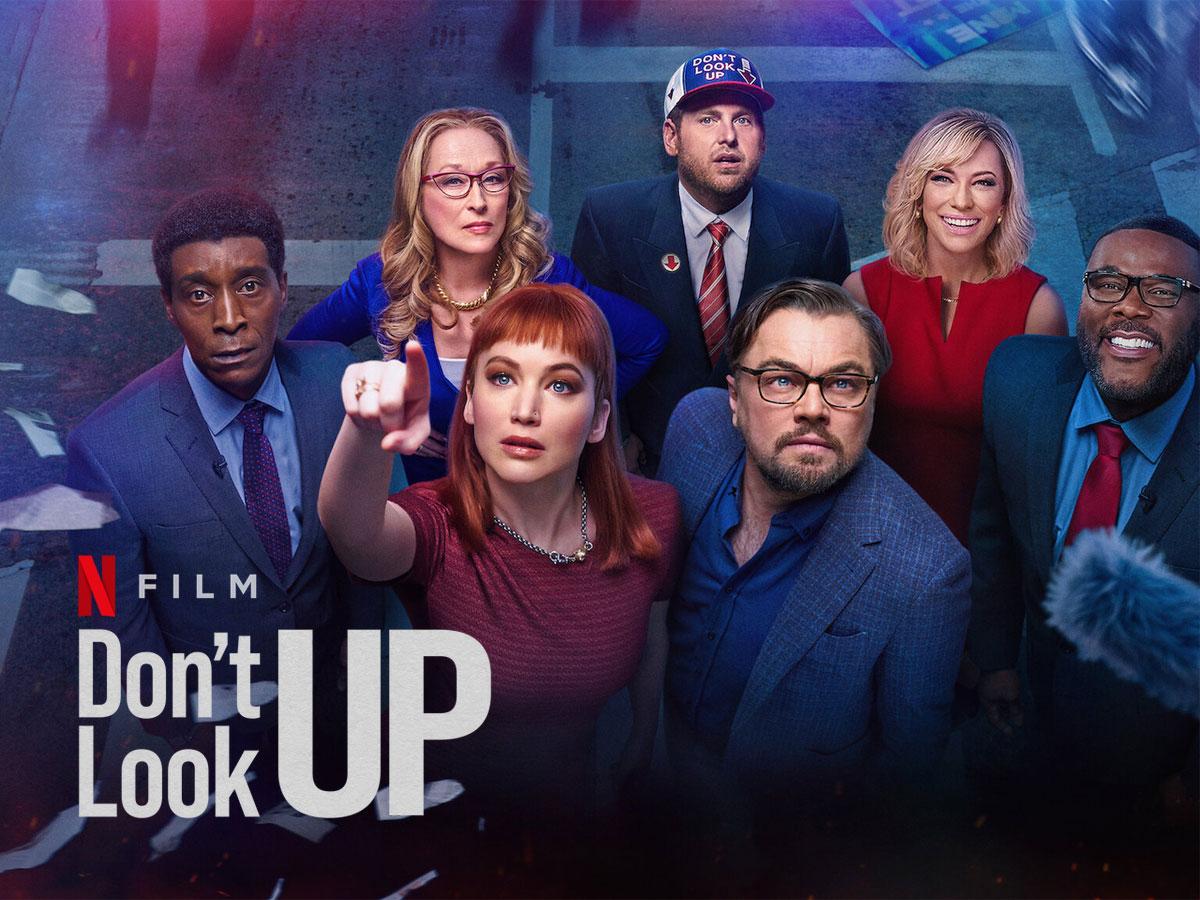 BOTTOM LINE: A Satirical Drama That Works In Parts

Kate Dibiasky (Jennifer Lawrence) is an astronomy graduate student who discovers the existence of a comet. Together with her professor, Dr Randall Mindy (Leonardo DiCaprio) they track the trajectory and calculate that the comet is about to hit the Earth in six months.

Kate and Mindy try to explain the seriousness of the situation to the President and everyone in their vicinity. The action she takes, and how the system treats the imminent danger at hand is the movie’s basic plot.

Leonardo DiCaprio is terrific as usual. The character starts off as usual for him. But, as it progresses we see why he has picked it up. He plays a serious character who is often frustrated at the system and people around him. The anger is brought out in the typical style of the actor. He shows a difference in body language via anxiety attacks. Everything is done with a slight dose of over the top element attached to it.

Jennifer Lawrence plays a much straight forward character in comparison. She is angrier and frustrated and eventually learns to mellow down. The difference in attitude and expression is clearly felt. All her scenes with DiCaprio are superb to watch.

Director Adam McKay of The Big Short and Vice fame helms Don’t Look Up. It is a satire on the current government, its policies and the hyperactive emotionless generation, in general. The allegory with the climate crisis too can’t be missed.

The beginning of the movie is slow and consists of some mumbo jumbo that could go over the head of regular people. However, as soon as the President angle is brought in we are intrigued by the narrative. The nonchalant ways of the power corridor are not entirely surprising even if it’s a satire, but is well done.

The narrative gains momentum with the whole media block. It is another predictable sequence, but the actors make it worthwhile. Everyone is spot on and the face value adds to the fun.

By this time, one is aware of how the proceedings are taking place. Each new block is a comic sketch involving an issue. It makes the whole thing formulaic, and thereby predictable.

The only thing that holds the attention all the while and continues to do so until the end is actually the ‘end’. Anyone who has started the movie will like to know what happens in the end. This simple yet killer hook is ultimately the movie’s bigger weapon.

The narrative gets repetitive and lacks the bite as it progresses. Some segments look very forced as if they are put in to cover broader topics. They add nothing significant, but the dialogues (even if telling what is already known) hold the attention along with the artists.

The curiosity in the finale is high as we reach the end. It is fantasy but does well in capturing the chaos. The various arcs coming full circle seems satisfying weirdly considering the end.

There is additional humour and advantage with the narrative and if one knows the background of the various sketches. But, it isn’t mandatory, though and one can still enjoy the proceedings without the additional info.

Overall, Don’t Look Up is a satire that delivers only in parts (a few blocks). But, the massive star-studded casting and the writing, partly, manage to hold the attention. If you like to watch a funny satire give Don’t Look Up a try, but have the expectations in check.

Don’t Look Up is filled with stars. Apart from the main leads, it also has the ever formidable Maryl Streep playing a dumb President, the underutilised Johan Hill doing his usual as a Chief Whip of the President. Then there are Cate Blanchett and Tyler Perry as star news anchors doing their bits. Mark Rylance as the greedy tech billionaire is superb. Rob Morgon and the rest put in a sincere act for even the smallest bits and pieces of roles they get.

The background score by Nicholas Britell fuses perfectly with the overall tone of the movie and enhances its appeal to a degree. The cinematography of Linus Sandgren is adequate. The calm but soon to be chaotic atmosphere could have been presented much better visually. The editing by Hank Corwin is okay. The writing is good overall even though the idea for which it is used is a bit predictable. It takes off the sheen a little.

The Satire Blocks, In Parts