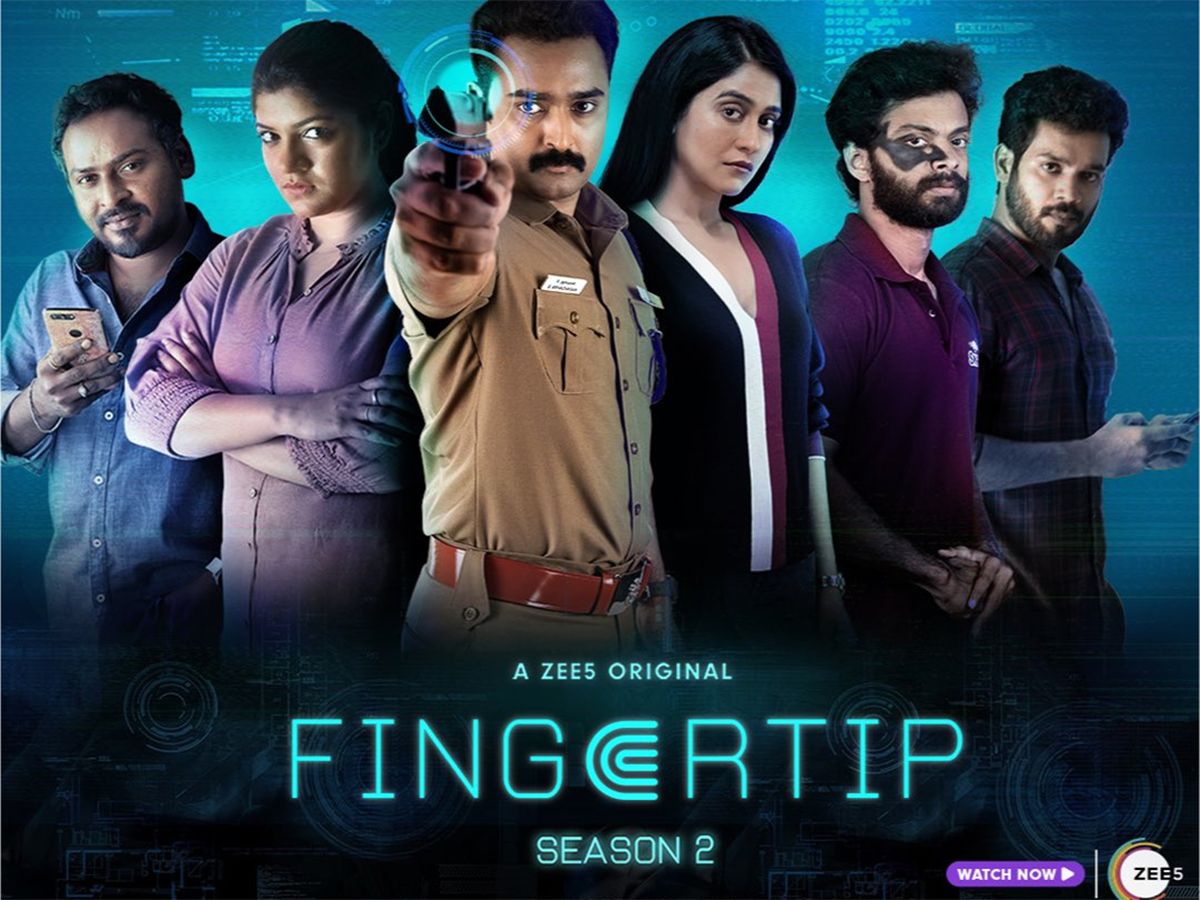 ZEE5’s Fingertip Season 2 tells multiple, interconnected tales within its 8-episode run, all of them focusing on the perils associated with living in a 24/7 digitally connected age. With internet technology at everyone’s fingertips, the common man is susceptible to myriad digital assaults – financial, emotional, and most dangerously, psychological. The series touches upon diverse dangers related to digital technology and social media – internet trolls, fake news, phishing, hacking, extortion, cybercrime, manipulation, and more.

Fingertip Season 2 is written and directed by Shivakar Srinivasan.

The performances in Fingertip Season 2 are good across the board. Prasanna brings gravitas and credibility to his role of determined cop, ACP Arivazhagan. Regina Cassandra is efficient as usual in her role of a film star who’s obsessed with the shape of her nose.

Sharath Ravi is suitably evil as the sexual predator, Adinath. Kanna Ravi is impactful as the master of fake news and internet manipulation, Naveen. But it is Aparna Balamurali as psychologist Shruthi, and Vinoth Kishan as food delivery guy Venkat, that steal the show in Fingertip Season 2.

Fingertip Season 2 is a show with its heart in the right place. It perfectly showcases the pitfalls of today’s internet age. As a character mentions in the series, “the internet is just a tool – it’s up to you whether you want to use it as a weapon or as a valuable resource”. Of course, Fingertip Season 2 shows how the biggest weapon in today’s age is the internet; and how it has the millennial generation in its vice-like grip.

The most stunning section of the series is the one that deals with how social media is used today to spread fake news. And how the fake news is converted into trending hashtags using fake social media accounts, internet trolls and bots. Fake news manipulators stop at nothing to achieve their sinister end – even using the notorious Deep Fake technology to create fake slanderous images and shred their target’s reputation to bits. The scenario that writer-director Shivakar Srinivasan has created is uncannily and eerily similar to what is happening in the real world today.

Not just young social media users, seniors are at risk from digital tech too. An aged couple that lives alone installs CCTV cameras at home, only to fall prey to a devastating situation due to the very devices they thought would provide them safety. It is the most horrifying segment of Fingertip Season 2.  Regina Cassandra’s story in Fingertip Season 2 is quite below par. It also barely has any connection to the core premise of the series as a whole. The attempt to link the character’s poor body image to social media’s fixation on beauty is just lame and lazy writing. Similarly, the sexual extortion part of the series is humdrum and routine. The issue has been around since the days of ‘Crime Patrol’ and ‘India’s Most Wanted’ on TV. There’s nothing new to narrate in the tale.

The most moving segment of the show is Venkat’s (Vinoth Kishan). Kishan brings poignancy to the role of a man with a huge chip on his shoulder. Initially, it is difficult to understand how his suffering is related to social media. But then you gradually get the connect. And you begin to abhor the so-called influencers who paint a pretty picture of bliss and success to sway gullible followers to their doom.

Fingertip Season 2 also raises the pertinent question of ethical hacking, and whether it constitutes invasion of privacy, even if the person at the receiving end is the guilty party. Very rarely has an Indian show focused on the confounding issue of ethical hacking, and the rights and wrongs of it. Kudos to Shivakar Srinivasan to shine a light on it.

To sum it up, Fingertip Season 2 is a mix of hit and miss segments. The show could have been a tighter, crisper watch had the makers not spread themselves too thin by stuffing the show with too many subplots. The final reveal of the series (the Switzerland connection) is quite amateurish and silly. Also, eight 40-minute episodes are a tad too much – a shorter runtime would have been way better. Nevertheless, our suggestion – watch the parts that catch your interest, and fast forward the boring, draggy bits.

Dheena Dhayalan uses a mix of high tempo beats and slow haunting music as needed, to give the required urgency to the narrative. Prasanna S Kumar’s camerawork is good. He translates the essence of the story onto screen well. Prasanna GK’s editing could have been sharper and more ruthless.

Performances of the primary characters

A couple of segments

Regina Cassandra’s segment is a drag

The final reveal is amateurish and far-fetched

Watch it, but with a firm finger on the fast-forward button