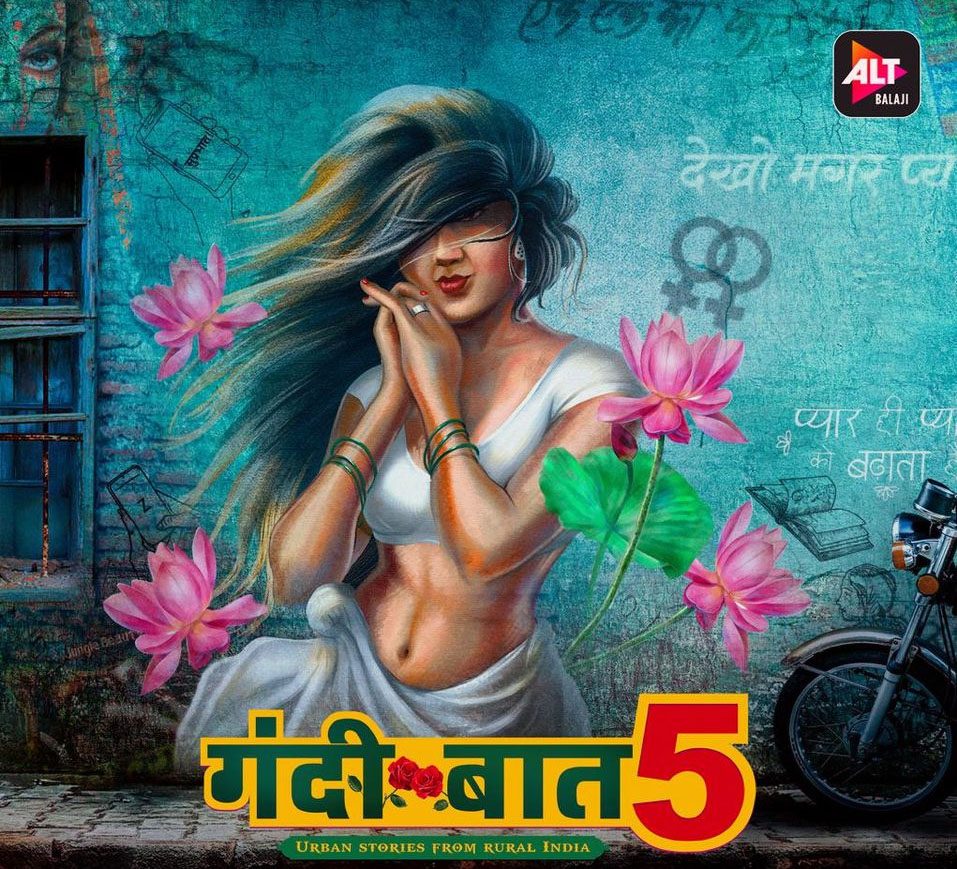 Skin N Swear: Excessive skin show and use of strong language (what more do you expect from Gandii Baat please?)

Gandii Baat Season 5 is a potpourri of four stories whose pivotal characters have concerns about their appearance, sexual identity, infidelity and social media validation. The first episode, ‘Erotic tales of Madhosh Madan’ is about an anonymous erotica novelist who spills beans about the sex lives of his/her colleagues by revealing their true identity, causing embarrassment to many. ‘Game of Love’ revolves around a female Kabaddi player coming to terms with her sexuality. ‘Happy Valentine’s Day’ is a tale of romance via dating apps gone wrong. Pintu’s 5 Million Followers is a story of how low you can stoop to attain social media validation.

There’s nothing memorable about the acting or the cast in Gandii Baat Season 5; you’d be naïve if you’re expecting anyone to catch your notice. Pamela Monda, Ankit Bhatia, Nitin Bhatia, Amika Shail, Sanya Bansal and Piyali Munshi are all in it to flaunt their bodies and fill their screen time with some skin show – at least there’s gender parity here.

Everyone is in the know about the kind of audience that a show like Gandii Baat is aimed at – but it’s criminal if you give them lines like ‘Tum jaise bhi ho, theek ho, tumhara heart accha hai aur private part bhi’. Gandii Baat, when it first entered streaming platforms, came with certain shock value for its raw treatment. Though it wasn’t pathbreaking, the show served its purpose of normalising sexual desire. Gandii Baat has consistently projected India like a land of sexually repressed people; the fifth season is a wasted attempt at cashing in on a popular franchise.

It is a tiresome rehash of all the clichés associated with adult fiction and has no novelty in terms of premise. Gandii Baat Season 5 tells how creatively bankrupt its writers are. The reasons that the characters attach to their motives are baffling and can make your head spin – that’ still an understatement. Be it the husband who sleeps around with random women because his wife is cheating on him or the erotica novelist who feels that she’s making the world a better place through her writings, or the gym instructor who drugs a social media celebrity owing to jealousy, none of the one-note characterisations makes any sense at all.

A trans character is identified by the kajal under his eyes and is embarrassed about his identity – the makers only succeed in increasing the stigma that the LGBTQ community has to battle. There’s nothing progressive about their representation. If the show makers of Gandii Baat think that their viewers only come to watch the intimate sequences in their episodes, they must well realise that there are ‘better’ options around. While you don’t come to the show to be bowled over by the ‘storytelling’ either, the least the makers could have done is to have some conviction in their content.

The filmmaker’s main focus lies in squeezing a few explicit scenes regardless of the direction that the story takes. The 45-minute length of each episode is under-utilised and wasted – this is when even the memory a show like Lust Stories warms you up that did such a fine job of showcasing sexual desire without compromising on the visual aesthetics. Of course, there’s no Zoya Akhtar or an Anurag Kashyap or a Karan Johar here. Gandii Baat, in the guise of telling stories about the social media generation, offers nothing new. It’s just like an attention-seeking clickbait thumbnail on YouTube, you know there’s nothing worthwhile in the content but still feel tempted to take a look.

No novelty in any episode

Bores you to death