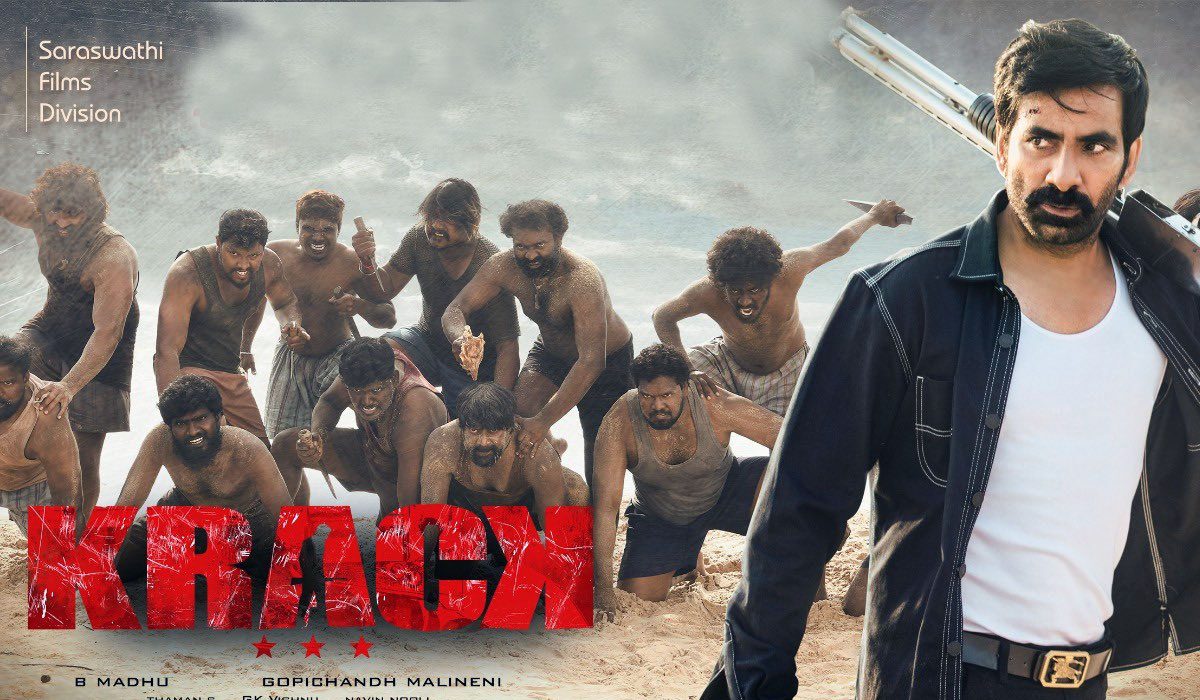 Salim Batkal, a dreaded terrorist, Kondareddy, a powerful goon from Kadapa, and Kathari Krishna, a dreaded personality ruling Ongole have a common miff and enemy, CI Shankar (Ravi Teja). What is their story? And how are they connected to Shankar, a ‘Krack’-head of a police officer is what the movie is all about?

Ravi Teja is seen doing what he does best with full of energy. He plays a highly volatile angry cop as only he can in his inimitable style. The director uses his intensity and aggressive body language correctly. Many scenes stand out for his incredible energy.

Ravi Teja is also a one-man entertainment machine. This aspect is not used fully, but the characterisation does give scope for it wherever possible. All the interactions between Ravi Teja and Samuthirakani bring out the intense side of the actor well. All in all, Krack is a memorable role for Ravi Teja. Not that he does anything out of the expected, but he does what is ‘expected’ phenomenally.

Gopichand Malineni got a break as a director with Ravi Teja’s Don Seenu. Over the years, he has been a formulaic filmmaker known to execute the formula movies with fast pace and entertainment. Krack is another one on the list for him, but it comes with a difference, and that’s where the impact lies.

Krack, for starters, is a serious fare. The entertainment quotient here is less compared to the past movies of the director. But, the critical point here is that the focus too is never on that aspect. Gopichand Malineni is looking at bringing a serious cop story with as little entertainment deviation as possible.

The template Gopichand Malineni picks here is that of Vijay Sethupathy’s cop story Sethupathy. We are only talking about the spirit of the movie and its approach. Krack is to the point with less ‘usual’ entertainment blocks.

There is some wobble initially, but Krack soon gets on track. Once it does, there is no looking back with the mass elevations getting bigger and better as it progresses. One is almost reminded of the Boyapati Sreenu style of movies.

Another difference is the rawness that is mixed with the usual mass elements. There is violence, but it doesn’t look comic book style even though the regular ‘bounces’ are there. Sometimes it feels overdone in fact due to the gore on display.

The first half ends on a solid note with the interval block. It raises the expectation on the second half significantly. The starting builds on the momentum generated, but after a point, the narrative slows down. Once that happens, the illogical things start to get noticed. They don’t matter in mass fare, but briefly, it is the case. It holds back the energy a bit.

Once the dragging part is over, things are back on track, but not as smoothly as before. Some lengthy fights reduce the fun. It needed further trimming. Still, these are minor quibbles in the final scheme of things. The ending helps one leave with a positive impact.

Shruti Haasan plays a typical flower pot heroine sort of role, for a large part. However, there are a couple of scenes which makes it worth the time for the actress. Both come in the second half.

Samuthirakani playing the antagonist is superb. He brings the much-needed menace initially and later brings out the transformation well. Ravi Shankar gets a decent role, and he shines in crucial moments. The kid overacts, but it seems intentional as over-action is confused with cuteness. Sapthagiri and Posani Krishna Murali are wasted. It is in the sense that they are given limited scope. Goparaju Ramana and Devi Prasad are okay.

The music and background score by S Thaman is superb. The songs don’t work as standalone, but they are well placed and shot within the narrative. But, it is the background score which elevates the proceedings. The cinematography by GK Krishna is excellent. The entire movie bears a vibrant and realistic look. The editing by Navin Nooli could have been better. At times we get a feeling of things overstaying their welcome.

The writing is decent for a mass fare. There was a fear of it being overdone based on the trailer.  But it doesn’t come across that way (mostly) as part of the narrative.

Drags In Parts In The Second Half