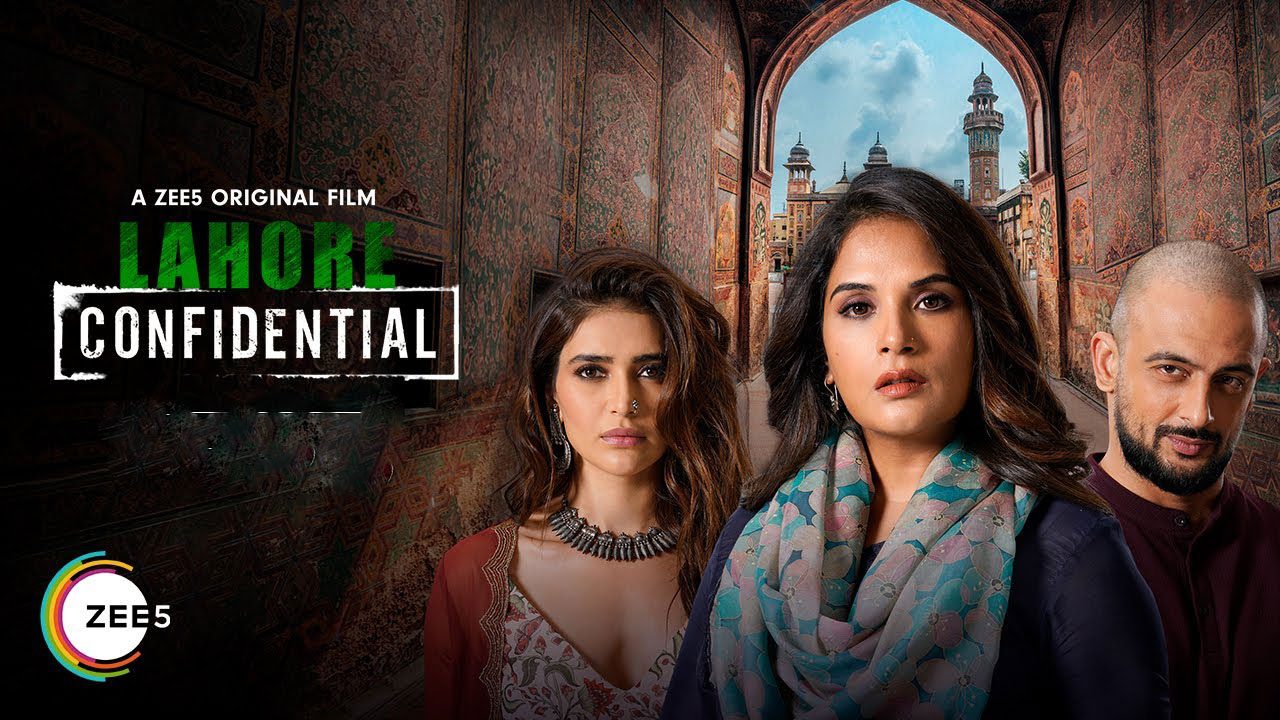 BOTTOM LINE: Sketchy Spy Thriller That Misses The Mark By A Wide Berth

Lahore Confidential is the latest ZEE5 original film from the stables of the prolific homegrown digital content creator. It is a spiritual sequel of sorts to the earlier ZEE5 film, London Confidential, as in both are spy thrillers. The cast, crew and plot of Lahore Confidential, though, is entirely different from the earlier film.
Lahore Confidential is set in the backdrop of the Indian High Commission in Lahore, Pakistan. Ananya (Richa Chadha) is a media attache who works with the Research and Analysis Wing (RAW), the Indian intelligence agency, in Delhi. She is recruited by two Indian agents Rajiv (Khalid Siddiqui) and Yukti (Karishma Tanna), to work at the Indian High Commission at Lahore, and under cover of the job, get inside details of Pakistani ISI agents.
In Lahore, Yukti introduces Ananya to Rauf Ahmed Kazmi (Arunoday Singh), an event organiser, who like Ananya, has a deep love for Urdu poetry. Rauf is the person Ananya must tap, in order to get information on Pakistani agents. Ananya falls in love with Rauf and wants to settle down with him, but a twist in the tale takes her down another path.
Lahore Confidential is written by Vibha Singh, directed by Kunal Kohli and produced by Ajay Rai of Jar Pictures.

Richa Chadha is insipid and lacking in spark throughout her portrayal of Ananya. Her delivery of dialogue is also as flat as her performance and as dry as sandpaper. Arunoday Singh just about passes muster – it is not a performance to sing hosannas about. Khalid Siddiqui is average as Agent Rajiv. Karishma Tanna is the only one who shows some spunk and verve in her performance, despite getting saddled with a less than convincing characterization.

Indian content creators’ tryst with the spy thriller genre has been chequered and below par for the most part. Worthy Indian spy thrillers have been few and far between. The trend continues with ZEE5’s latest “spy thriller”, Lahore Confidential. With a middling storyline, mundane performances and mind-numbing dialogues, the film is a tedious watch, to put it mildly. It can easily be categorised as one of the most unintelligent spy thrillers in the entire Indian content space, which is quite surprising, considering that S Hussain Zaidi is credited with the story idea of Lahore Confidential.
There’s nothing in Lahore Confidential that can elevate the film from mediocre to must watch status. The plot is riddled with loopholes, and is absolutely unworthy to be put into the category of a spy thriller. The characterisations are laughable, and most sequences are cringeworthy. This is not how any self-respecting spy anywhere in the world works, let alone India or Pakistan.
To be honest, most of our time watching Lahore Confidential is spent fighting a raging urge to shake Richa Chadha’s Ananya out of her irritating naivete – for heaven’s sake girl, even an eleven year old can see through the ruse that forms the crux of the story.
The interactions between Ananya and her mother (Alka Amin) are another irritant. They are totally unnecessary and completely dispensable, not to say, they get on your nerves. Ananya is going away to Pakistan — of all places — for an entire year, and all her mother has to say is “Do you want to stay unmarried all your life?”. Weird AF, if you ask us.
The dialogues take the definition of cringe to another level altogether. Three highly skilled Indian agents are killed because of Ananya’s glaring stupidity, and all she can say is, “Sorry, sorry, I’m really sorry”,….like seriously, dude!! Is that the best you can do, Mr Dialogue-writer?
All said and done, Lahore Confidential is a movie that leaves a lot to be desired. It is a spy thriller loaded with cringe, minus all the thrill. The only good thing about it is the short runtime – it’s only 1 hr 8 minutes long — thank God for small mercies. Watch Lahore Confidential at your own risk, is all we can say.

The music of Lahore Confidential is average. The Urdu numbers are pleasing to listen to, but quite forgettable. The editing by Nikhil Parihar is passable.
The cinematography by Karthik Ganesh is the one thing in Lahore Confidential that impresses. A few shots are beauteous enough to leave an impact – like the one with the pigeons perched on the ‘jharokhas’ of an ancient edifice.