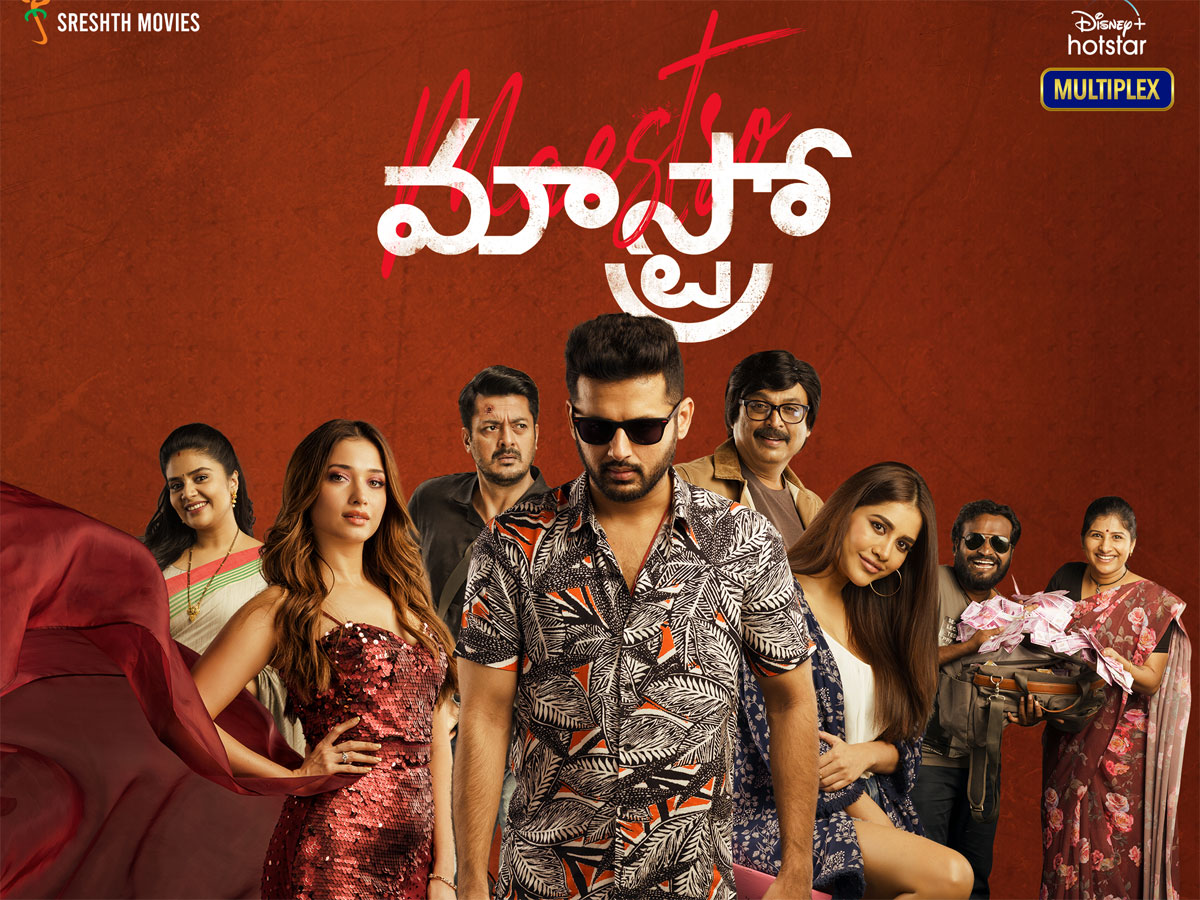 BOTTOM LINE: Fails A Legend And Ends Up Passable!

Arun (Nithiin) is a talented Piano player who is blind. He uplifts the business of an about-to-shut bar with his talent. A former actor (Naresh) falls flat for his talent and invites him for a private concert at his home to surprise his wife (Tamannah) on their anniversary. The visit changes the life of Arun.

Nithiin has come up with an impressive performance as a talented blind piano player. He looked so handsome in the film and walked through the initial portions. Playing blind does not mean a challenging role. It is also within the commercial framework. The blind portions were neat. He also looked confident in later parts of the film in distressing times. The good part is that Nithin did not force the director to do something out of the box to utilize his image.

Maestro is the official remake of Hindi Blockbuster, Andhadhun. Director Merlapaka Gandhi has made very minor changes to the story and songs were added. The changes were not major so as to alter the crux of the original. The director did not try to play too much and end up taking a risk.

The initial portions were a bit slow. The romantic portions were less steamy than the original. The movie picks pace ever since Arun arrives at Tamannah’s place. The major plus about the film is that we have surprise elements here and there at regular intervals. It is like one mistake leads to another and one misdeed triggering the next.

However, the twists are not as intense. There are two issues about Maestro. Tamannah’s casting is an error. She brings in the star value and glamour quotient for the film. But those shift the focus from the task at hand. The actual character needed that seriousness and shrewdness to drive the story home. Tamannah falls flat in doing that.

The other issue with Maestro is replacing the small girl character with that of a teenager (Ananya Nagalla). That does not justify the empathy of the protagonist and him keeping his life above for her. The dark comedy which is the forte of Andhadhun is lost while making the movie suitable for Telugu nativity. It does not give you the ‘completeness’.

Finally, Maestro is incomparable with the original. With very minor changes, the movie is more or less a faithful remake. But still, magic can not be created. At the same time, the output is not something that can be brushed aside. Despite the issues, the movie still makes a passable watch.

Nabha Natesh and Tamannah are a treat to watch. Both of them are smoking hot and would have got some whistles from the masses if released in theaters. Nabha does not have too much scope to perform and she is up to whatever is expected of her.

Tamannah gets a character with substance but that is lost in the glitter. Tabu’s serious glares were missing in her. Tamannah’s glamour dominates the character and distracts from the actual mission which is not the case of Tabu. She dubbed herself for the character which looked odd at places.

Naresh looks unnatural with that odd-looking wig but that justifies his character of an aging superstar who living in his lost glory. Ananya Nagalla looks misfit for the character. The change is needless. The director should have stick to the original where the character is a small girl.

Jisshu Sengupta is perfect in the negative police character. Mangli is a perfect choice and is too good in her debut. Racha Ravi also does justice to whatever he is offered. Sreemukhi is alright in a small role and Amrutham fame Harsha Vardhan is a perfect fit as a greedy doctor. The only actors whom you feel like wasted are Srinivas Reddy and Rangasthalam Mahesh who were given too trivial characters.

There are a few songs in Maestro. Maybe one more than the original. Mahati Swara Sagar did a fine job with them. None of the songs come in the way of the movie proceedings. Vennello Aadapilla leaves an impression while the rest are okay. The background score is again fine. A couple of piano music bits are very appealing. J. Yuvaraj’s camera work is glossy and oozes grandeur in every frame. S.R. Shekhar’s editing has been crisp.

Nithin and casting of few other characters

Maybe For A Digital Watch