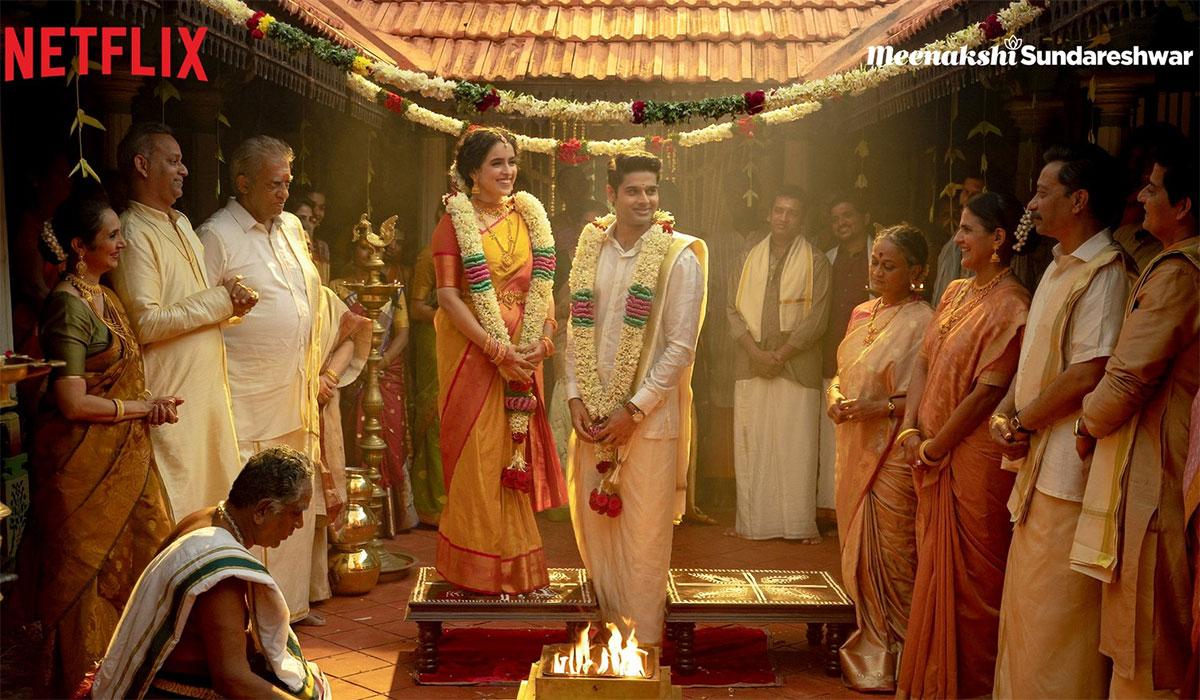 BOTTOM LINE: First Half Fluff Cannot Save This Formulaic Film

Skin N Swear: Not much of either

Meenakshi and Sundareshwar marry each other after an impromptu meeting. They are attracted to each other but before they could properly get to know each other, Sundareshwar gets a job opportunity that takes him away from Meenakshi for a year. Can this newlywed couple handle the pressures that come with long-distance relationships?

‘Meenakshi Sundareshwar’ depends on the performances of its two leads – Sanya Malhotra and Abhimanyu Dasani. Sanya is vibrant as Meenakshi, while Abhimanyu gives us a very subdued Sundareshwar (or Sunder). Both actors portray Hindi speaking Tamil characters, and they play that part to perfection. Both, Meenakshi and Sundareshwar, have some established character depth and their introduction to each other only adds to this depth. Plus, their onscreen chemistry is good, at least in the first half of the film. However, things are very different in the second half.

Sanya manages to keep Meenakshi the same, but Abhimanyu somehow manages to lose all his charm quickly. While Sanya is effortless throughout, Abhimanyu somehow plays two very different characters in his portrayal of Sunder. We are not saying Abhimanyu is a bad actor, but he missed the brief on this one (in the second half at least) and becomes quite irritating to watch by the end of the film.

‘Meenakshi Sundareshwar’ is an old school arranged marriage tale – boy’s family meets girl’s family, then boy meets girl. They like each other and then get married. However, for some reason, the initial attraction doesn’t continue forth in the relationship due to some unforeseen reason. This will lead to a “crisis”, down the line. But the two lovers will talk things through and everything will become alright again. Pretty much what happened in this movie. This film shows one of the more commonly repeated love stories without bringing anything fresh to the story – which means we saw the ending of this film coming from miles away, including the Rajnikanth bit. Which may sound exciting, but it is quite boring.

The film starts off quite well. The film shows the union of two Tamil families and it keeps the integrity of most of the South Indian traditions intact. The first half is brilliant with some good setups for the second half. These include the strained relationship between Sunder and his father, Meenakshi and her obsession with Rajnikanth, the push & pull within Meenakshi and Sundareshwar’s marriage, Sunder hiding his wedding ring to protect his job, Sunder’s relationship with his new co-worker friends, etc. And with perhaps the exception of the previously mentioned Meenakshi’s Rajnikanth obsession – none of the aforementioned setups provide a satisfactory onscreen payoff. Which is one of the main reasons why the second half of the film is irritating. There is no real plot or crisis happening in the film. Both of the lead characters argue for a bit – which gets blown out of proportions. Then Meenakshi leaves. Then she comes back. Sunder tells her to leave. She leaves. Then he goes to her and apologizes. She takes him back. Roll credits. Yep. This is literally what happened.

There are some good things in the film. Like it was mentioned earlier, the first half of ‘Meenakshi Sundareshwar’ is brilliant. The cinematography and music is top notch while the lead actors have some good onscreen chemistry. Everything is bright and cheerful and properly set up for the second half. Sanya gives us a very realistic portrayal of Meenakshi and manages to keep the character the same throughout. Abhimanyu is memorable in the first half as well as the reserved, shy Sunder as well. But by the second half of the film, Sunder quickly becomes quite irritating to watch and his parts of the film quickly become boring. Sunder also has a bit of a personality change at the end of the film, which becomes quite evident and jarring. Sunder confidently starts a presentation, walks out on his job on a whim and breaks into a theatre by blowing up some firecrackers. A huge shift in personality indeed.

Overall, Meenakshi Sundareshwar started out as a good romance comedy but quickly became another one-dimensional romance film. The first half is worth a watch, but it will drag on halfway through the second half.

While the film mainly focuses on the two main characters – there are a few characters in the periphery that play vital roles onscreen. Purnendu Bhattacharya and Sukhesh Arora play two important characters onscreen – Sunder’s father and boss respectively. Both characters are vital to Sunder’s story and the actors play their roles well. Ritika Shrotri, who plays Sunder’s sister, also deserves a mention.

Music, cinematography and direction are few of the best parts of the film. However, the script needs a lot more work. A few minor changes here and there and we would have had a much better story in our hands. Instead, we are left with an unsatisfying ending.

Lock of a Real Crisis

Meh, it was okay

This is the movie for you if you like fluffy, romance films. Otherwise, skip it