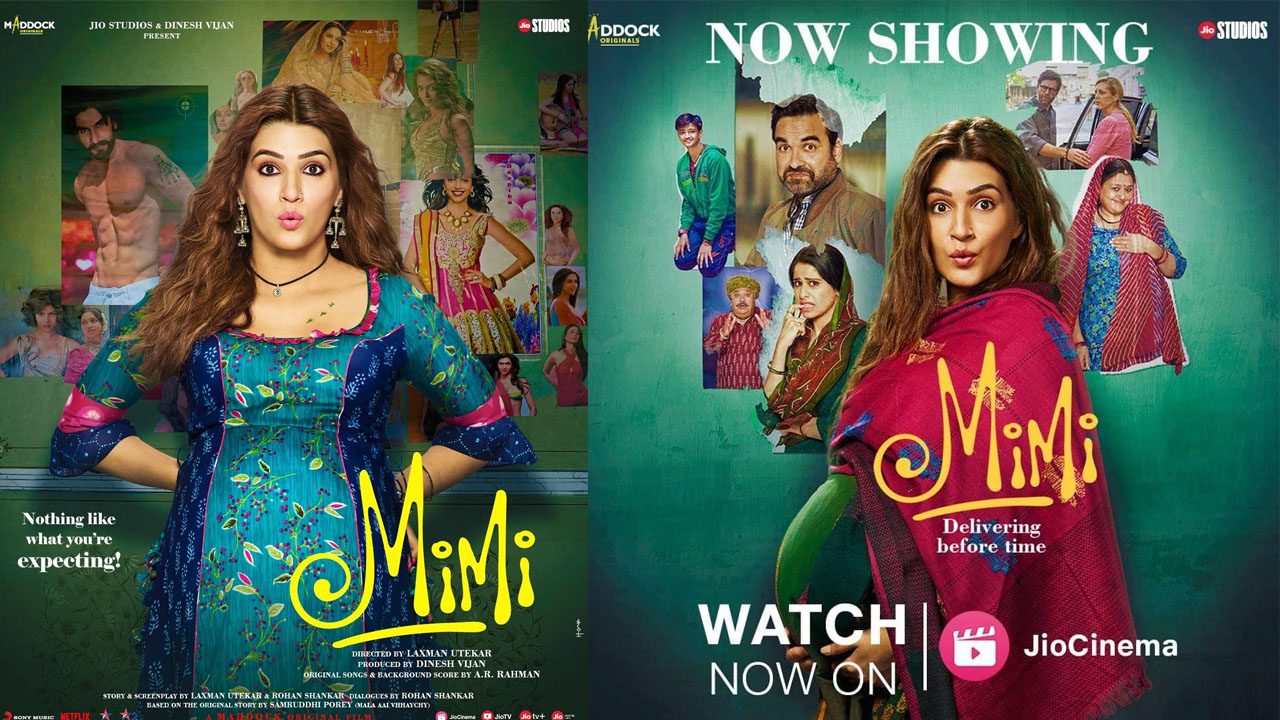 BOTTOM LINE: Entertainment Lifts Whereas Drama Bogs It Down

John and Summer are a couple from the US who are looking for the right Indian woman for surrogacy. Bhanu (Pankaj Tripathi), a taxi driver tries to help the couple in the process.

Mimi (Kriti Sanon) is a vivacious young wannabe actress. She dances locally to show her talent. In one such event, the foreign couple takes a liking to her. Bhanu Pratap convinces her to bear a child as it would help her fulfil the Bollywood dream. What happens when the couple leaves Mimi midway? How Mimi deals with the repercussions of surrogacy pregnancy is the basic plot of the movie.

Kriti Sanon is perfect for the part of Mimi. It sits perfectly with the image she is building through her choices. In fact, it feels repetitive in a way due to the same reason.

The beginning is business as usual for Kriti Sanon playing small-town girl, but things change around the pre-interval mark. The character takes a dramatic turn, and she does well in those portions. The role offers her to explore something different, and she makes the best use of it. Within her short career, Mimi is a game-changer for considering the scope it offers and the way she carries it.

Laxman Utekar directs Mimi. It is based on a Marathi movie, Mala Aai Vhhaychay, that deals with surrogacy.

The subject is not new, the topic of surrogacy has been dealt with in the past too. What makes Mimi different is the tone. It is narrated with a lighter fun tone keeping the seriousness intact. A great deal of that aspects can be attributed to Pankaj Tripathi‘ performance, though.

The entire first hour of the movie is a delight to watch. The screenplay is smooth and blends the entertainment neatly into it. The casting of Pankaj Tripathi is a masterstroke here. He is in terrific form and carries the movie on his shoulder like a lead.

The core issue and the proceedings involving it are neatly taken care of by Pankaj Tripathi. The actor convincing Mimi, and then later looking after her are all dealt with neatly.   The twist in the tale is not entirely unexpected, but it works out well. One is engaged in the narrative thanks to actors and the supporting cast.

The problem here is the sappy turn of the narrative. Signs of it are visible at the beginning of the second hour. But, the sequences related to the taxi driver and his family takes care of it. However, once that is done, we are only left with predictable drama. It is here that Mimi loses track.

The pre-climax and climax take a sentimental route. The change in tone is not much of a problem, but the predictable emotions are sure. Parts of it take a cringe turn. Also, the final message it wants to convey feels like coming too late in the day.

Overall, Mimi is a decent watch for its entertainment in the first half. The dramatic turn is alright which makes it passable overall.

Pankaj Tripathi is the show-stealer in the movie. In every scene he is present, he owns it. Be it the comic timing in the first half of the drama in the final half an hour, he stands out every time.

Sai Tamhankar is reliable as usual, but one gets a feeling that she is underused. She goes missing for a fair part in the second half.

Manoj Pahwa plays a significant role after some gap. He is fine in critical scenes and makes them compelling. The same is the case with Supriya Pathak playing the mother. They are the backbone of the narrative. Evelyn Edwards and Aidan Whytock do well as the NRI couple. The former gets to do more drama and she is okay. The rest of the cast is decent in their parts.

AR Rahman provides the music and background score for the movie. It is after a long gap that he works on a Bollywood movie. Be delivers as is expected from him. The background score is seamlessly integrated into the narrative. The cinematography by Akash Agarwal could have been better considering the backdrop. The editing by Manish Pradhan is neat. The writing is a mixed bag. The entertainment works. The drama could have been better.

Drag In Second Half