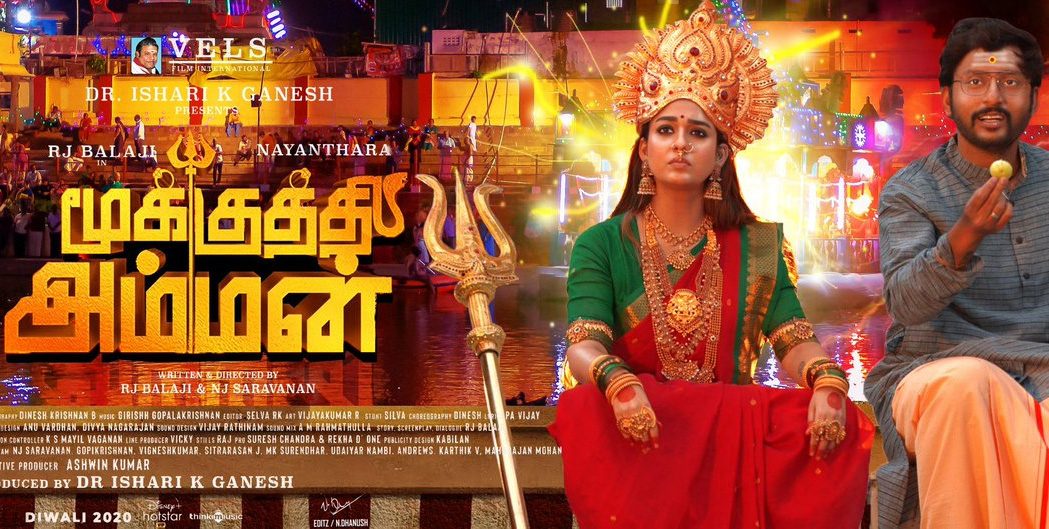 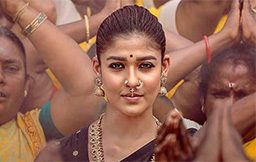 Engels Ramasamy (RJ Balaji) is a local journalist who lives by covering small-time news. He is the sole earner of a family with three younger sisters. And there are a mother and grandfather, additionally.

Ramasamy is frustrated with his life. One night during a stay at temple of their family deity, Mookuthi Amman, Ramasamy pour out his grief. Hearing the outburst, the goodness descends on the earth and talks to him. It brings a change in his life and attitude. What are they? How it ties to the God vs Godmen angle of the plot is the basic story of the film?

RJ Balaji acts, writes and co-directs Mookuthi Amman. We will talk about the other skills below, but as an actor, he is strictly okay. A better actor in his place could have added a lot to the emotional side of the story, but, that doesn’t seem to be the concern here.

It is why RJ Balaji doesn’t seem entirely unnecessary here. The senior actor and other artists lift the heavyweight moments. RJ Balaji has to maintain the satirical and comic flow going with a consistently plastered frustrated expression. He does well on that score. 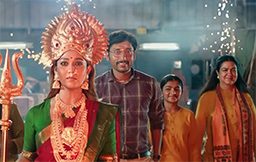 RJ Balaji and NJ Saravanan have jointly directed Mookuthi Amman. The story of the film is alright. It deals with a contemporary topic and one that is going to be an issue in the upcoming elections in Tamil Nadu. However, it isn’t entirely fresh subject wise.

The opening dialogue stretch instantly draws us into the narrative. It sets up the premise, establishes the character and also leaves us pondering with its musings. The following sequences showing the world of the lead, and his problem feels never-ending after a point.

It is not just the lead, even as a viewer, one feels fed up. And that’s when the Goddess makes her entry. Could that be intentional from the writer and director then, so that as an audience, we also feel the pain? Whatever be the case, the timing of Nayanthara‘s entry couldn’t have been better.

The proceedings pick up with her arrival, and we get a kick on with the story. We get into the core plot of the film. The introduction of Godman furthers the curiosity factor of the narrative. 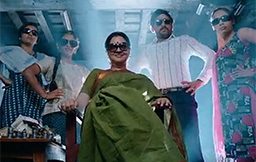 Along the way we get a couple of beautiful scenes, first where one of the sisters asks for a day off is sure to hit home its point.

The second one involving the breakdown of the mother and her explaining the reason for having many kids is also well done.

There are a few more exciting parts involving RJ Balaji and Nayanthara. They keep us glued to the story and curious to know more and where it is headed. However, in the final act, Mookuthi Amman lacks sequences like the two mentioned above. There are a few planned similarly, but they lack freshness. We have seen them before where movies have been made with the same theme. The Bollywood movie PK comes to our mind many times when the Goddess talks about the worship out of fear rather than faith, and also, the direct connection to God, and ‘what is the guarantee’ parts. 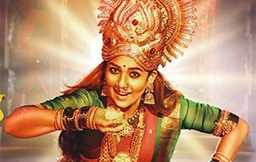 The ending is wrapped up conveniently after delivering the message. The story here takes a backseat to the ‘message’. Therefore, there is nothing left to talk about the family (which is painstakingly established initially) or be emotionally invested.

Overall, Mookuthi Amman is a decent attempt with a contemporary and pertinent theme. It is adequate for a one-time watch on the digital platform. Give it a try and wait patiently until the Goddess appears.

The female leads have all done well in the movie. Nayanthara and Urvashi stand out with their respective acts. The former plays the titular Goddess and she looks like one exuding a divine glow and confidence. It is her poise and absolute authority that makes one buy the act and take the message in one’s stride. Urvashi, on the other hand, plays a pathological liar and loudmouth. It irritates initially, but soon after one gets used to it, there is a knock out moment. Ajay Ghosh is fine as Bhagavathi Baba. The rest of the cast is also decent, and they do the required without going overboard. 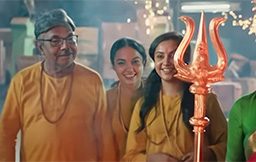 The songs by Girishh G act as speed breakers. The background score is reasonably okay, though at times it feels loud. The cinematography by Dinesh Krishnan is satisfactory. It presents a neat picture of a small town, though nothing is particularly memorable. The editing by RK Selva is good. RJ Balaji also handles the writing. It is the best of all the three departments that he dabbles. However, it lacks the razor-sharp critical precision with its wordings.

Gets Routine After a Point The Initial Set up