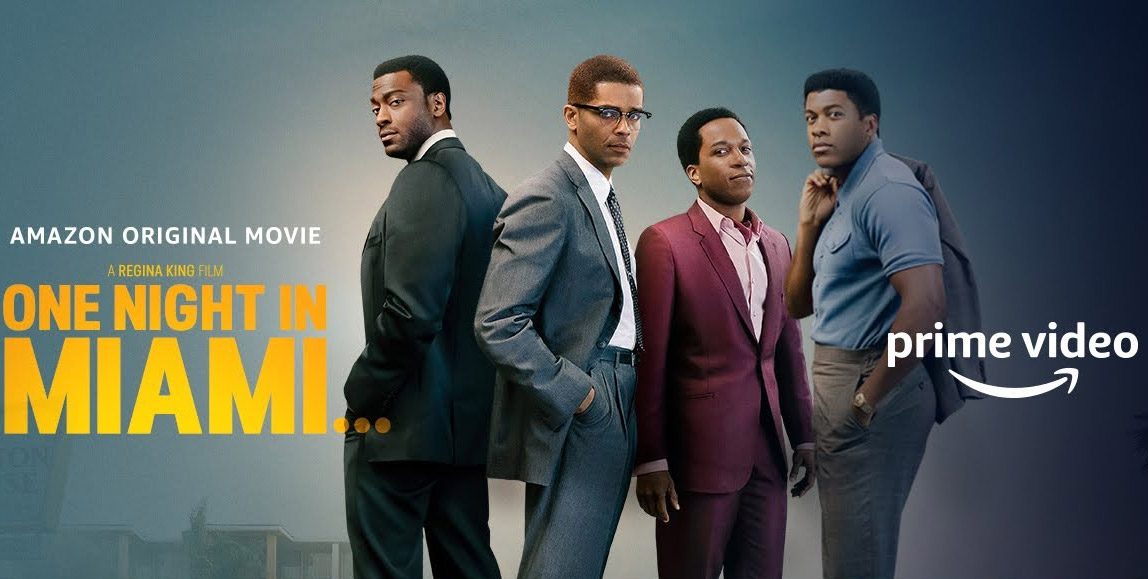 One Night In Miami is a fictional tale. It is about four black icons – Malcolm X, Muhammad Ali, Sam Cooke and Jim Brown. What happens when they all come under one roof in a hotel in Miami is what the movie is all about? 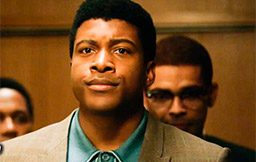 One Night In Miami is an excellent example of a movie with perfect casting. All the four actors chosen to play the legendary parts are apt and deliver the needful without any one-upmanship and trying to overdo the other feeling. Everyone goes with the content and let the story take the course.

Kingsley Ben-Adir, Aldis Hodge, Leslie Odom Jr, and Eli Goree are the actors enacting the iconic parts. They are terrific in their respective roles and have moments of brilliance throughout.

In movies, it is generally rare, or in the best case, we get a single outstanding performance, but here in One Night In Miami, there are four great ones delivered simultaneously. 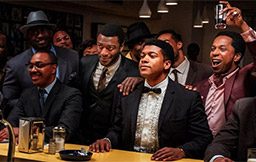 Playing an iconic and legendary part is a tricky affair. It is essential to get the feel of the present right (concerning the role at its time) and not act all ‘legendary’ from the start itself. The actors and the writers do a fantastic job in this regard. While the ‘local’ might know a lot more to get significantly better connect, even those who are not aware of them (except the names, of course), get a lot of insight on them to be engaged.

The genuine camaraderie and respect every individual has on each other are wonderfully enacted through the ensemble cast. The face-off and emotional moments are shown with brilliant preciseness.

Regina King, a long time actress, turns feature film director with One Night In Miami. She has picked a unique subject for her debut. It is based on the stage-play of the same name. 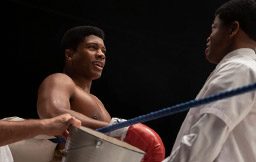 One Night In Miami is in a spirit similar to the classic movie 12 Angry Men. Four different men of colour come under a roof to discuss a burning issue related to their community. Here it is about the black revolution. In his own way, Malcolm X is trying to take the struggle to the next level by bringing the iconic figures of their time together to form a common voice.

Through the narrative, the sharp writing, editing and performances raise some pertinent issues related to the black community. It neatly presents all the sides to the problem (within and outside) through different characters.

The conflict here is such that it is identifiable across the generations. It isn’t only about a time gone by but applies to current as well. The conversations and drama between Malcolm X and Sam Cooke regarding the music and similar dialogue between Malcolm X and Jim Brown are superbly acted, written and terrific to watch. They are powerful and sure to leave an impact. 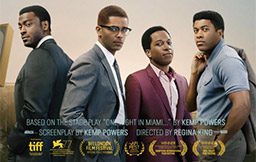 The ‘Muslim’ angle is carefully weaved into the narrative treading a fine line between sounding like propaganda and delivering the right message. It is a very thin rope, and the success of the outcomes is a testament to the team’s sharpness behind the screen. It is razor-sharp and cuts to the point before one starts to feel things might be digressing.

Apart from the powerful message, there is a lot of insight into the icons to those who might not be aware of them apart from the iconicity attached to their names. The end leaves us with a feeling of hope and positivity, even if there is no background connection. It is the result of a powerfully engaging narrative.

Overall, One Night In Miami is a master-class in acting, writing and sharp editing. Watch it for the performances even if politically loaded content is not your cup of tea. If the politics presented is not a problem, then it is a must-watch for the terrific narrative.

Terence Blanchard provides the music. It is neat and blends well with the proceedings. But, it is the actual music discussed and used as part of the plot that shines. The cinematography by Rami Reiker is excellent despite the limitations of confined locations. The editing by Tariq Anwar is brilliant. The writing and screenplay by Kemp Powers are fantastic. They are the reason, along with the performances, to be immersed in the narrative.

The Politics (Depends On Individual Choice)

One Night In Miami Review by Binged Bureau