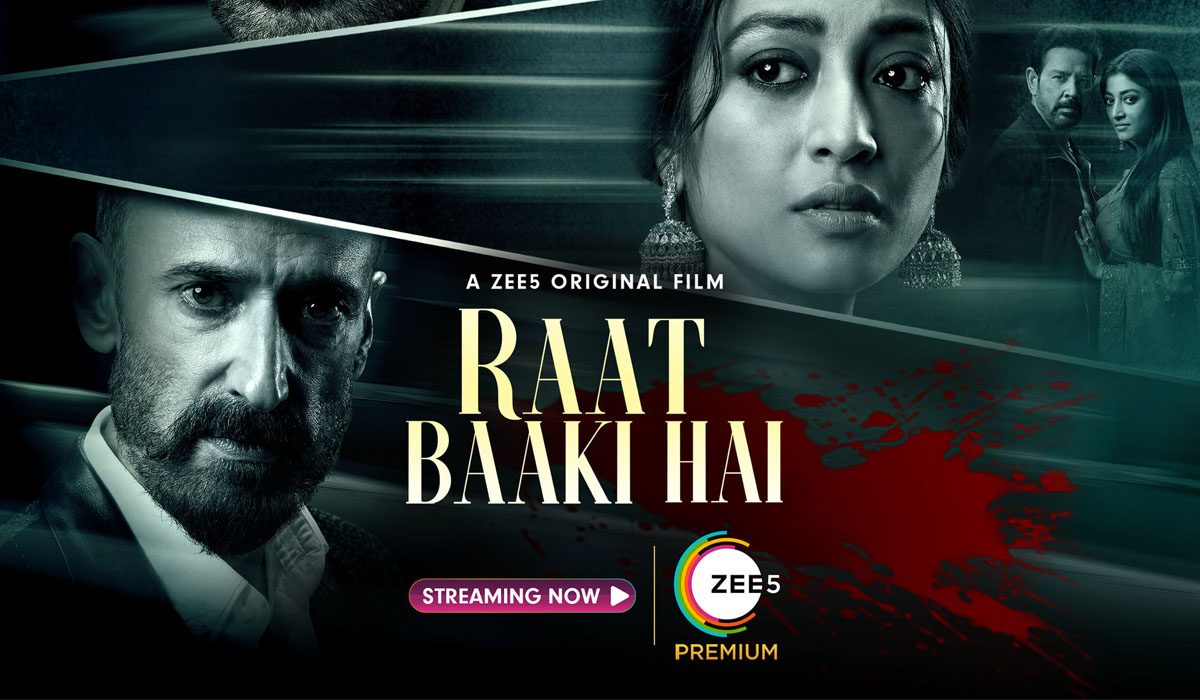 BOTTOM LINE: A Train Wreck of a Thriller

Writer Kartik Varma and actress Vani Chopra are engaged in Rajasthan at an event hosted with pomp and grandeur in the presence of the crème de la crème of the entertainment industry. A few hours later, Vani is found murdered under mysterious circumstances. An acquaintance of Vani, the notorious film producer Rehan Mustafa is a prime suspect in the case. Her husband-to-be Kartik is on the run and bumps into his ex, Vasuki. Vasuki is the wife of Sujaan Singh, who enjoys a royal lineage and is an unofficial power-centre in the State. Several skeletons tumble over a long night that gets creepier by the hour.

Not a single performance strikes a chord. Anup Sonii, despite being a regular with the original play, appears quite mechanical and wooden in his portrayal of a selfish, success-hungry writer. Paoli Dam’s performance is all style and no substance – she hardly strains her acting muscle and there’s nothing in her act to suggest the character’s trauma of being an unloved woman for over 15 years.

Dipannita Sharma sparkles in a brief role that’s largely undone by the poor characterisation. A good-looking Rahul Dev is desperate to prove his effortlessness in a cool cop-act, though he lacks a strong screen presence and his performance comes across as lazy. The supporting cast including Saanand Varma, Sameer Malhotra, Saurabh Sachdeva is given little material to play with.

Raat Baaki Hai is an official adaptation of the popular Hindi play, Ballygunge 1990, written by Atul Satya Koushik. Writer Siddharth Mishra and director Avinash Das mildly tweak the play’s setting for the web show – the backdrop shifts from West Bengal to Rajasthan and with it comes minor changes to lend authenticity to the setup. Yet, no effort is adequate to shake off the vibe that Raat Baaki Hai is a result lost in translation.

From the under-wrought story to the tepid execution paying little heed to the atmospherics of a thriller and the half-baked performances, the web original is a bummer from the first frame. The show has the intensity and the vigour of a dead fish. The investigation is so casual and the dialogues, laughable. The officer comes up with gems like ‘One needs to find clues to a riddle from the other end’ and ‘Don’t treat this investigation like a film story because it involves an actress’.

The writing is toothless and the characters hardly have the scope to grow on you. It’s not difficult to understand why one would have empathised with an unloved woman like Vasuki in a play – the stage is a perfect medium for self-introspection and provides ample opportunity to verbalise pent-up emotions. However, in a film spanning 90 minutes, it’s hardly a luxury you could afford. The poor acting kills any joy left in the guessing game. The ending is a damp squib that states the obvious. Raat Baaki Hai is too uneventful and dull –a puzzle that was best left for the stage.

JAM8, as s music group, is left helpless in their attempt to salvage this train wreck of a thriller, with little meat or substance in the writing. To put it mildly, Akhilesh Jaiswal’s dialogues are unintentionally humorous. Siddharth Mishra’s adaptation from the play to the web show lacks finesse – neither is the story new nor is it presented with any flair. The story is told on a large canvas though mere pomp can’t compensate for its glaring flaws. The edits do nothing to create the slick vibe of a thriller – the (90-minute) duration is overlong by at least 20 minutes.

Impressive efforts by the technical team

The grand canvas amid which it is shot

A terrible job with the adaptation