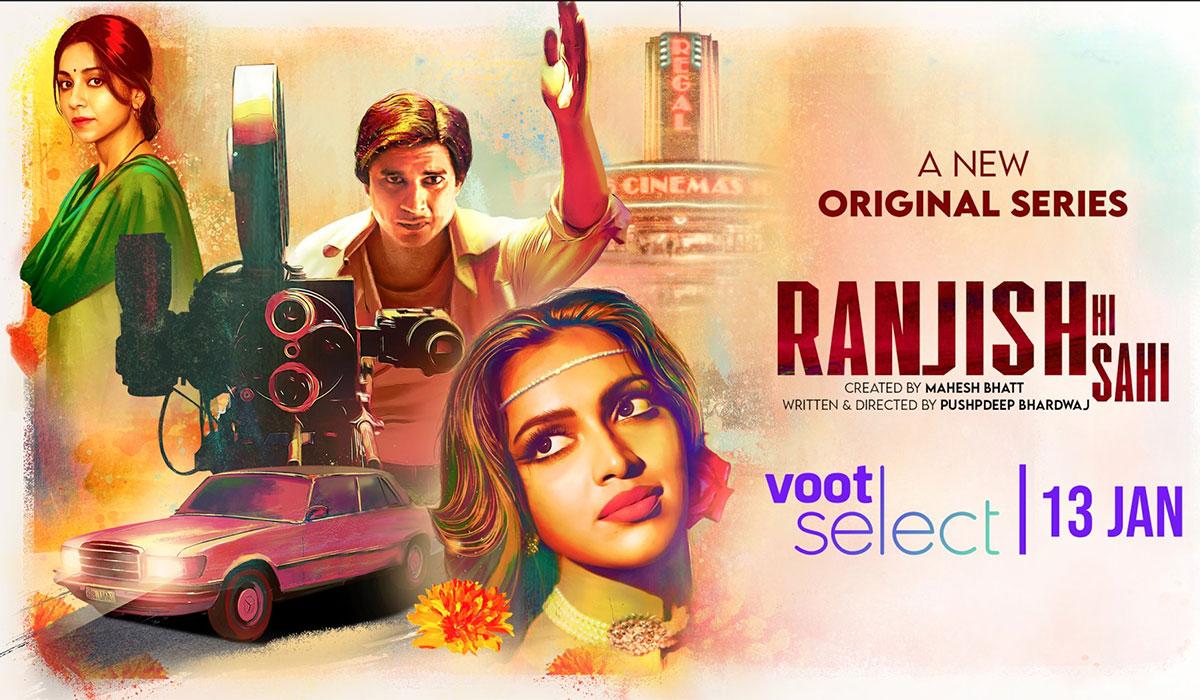 Set in the late 1970s and early 2000s, the story of Ranjish Hi Sahi is about the flop director Shankar (Tahir Raj Bhasin) finding his first story. The basic premise is how a relationship with a famous actress of his time, Amna Parvez (Amala Paul), helps him get it.

The series is based on the life of director Mahesh Bhatt. It is an overly dramatic and fictionalized account with few changes from real life.

If you are a fan of Tahir Raj Bhasin, you are in for a treat this weekend. Two series featuring the actor, Yeh Kaali Kaali Ankhein, and Ranjish Hi Sahi are out. Both are unrelated in the space and setting, but there is a common undercurrent theme in them. It is also what highlights the actor’s versatility.

Tahir Raj Bhasin is once again the object of desire of a woman. However, this time he is not meek and surrendering kind. Shankar is a hero, and he takes things into his hand and doesn’t budge to forceful tactics. The aggression is conveyed without going overboard or overdramatic. At the same time, there is helplessness and a vulnerable side to him. Both the dimensions are neatly conveyed and enacted by Tahir. Many scenes highlight his dramatic skills.

The wig, and the small prosthetic work, in general, could have been better handled, though. It is a distraction, at times. Besides that, there is nothing to complain about.

Pushpadeep Bharadwaj writes and directs Ranjish Hi Sahi. It is based on the life of Mahesh Bhatt and tracks the period which led to his breakthrough story in the eighties.

Basically, what we have in Ranjish Hi Sahi, is Woh Lamhe in its original period avatar. It is also what makes the series tolerable in the first place. The seventies setting, the starry attitude, the behaviour of various people engage us in the proceedings.

But, when it comes to the main story, we have seen it all before. It will be intriguing to those who have no clue about the previous iterations of the real-life incidents, though.

What makes the predictable narrative work is the compelling act by the leads. The lack of new elements in the story and the languid pace hinders the engagement. Tahir Raj Bhasin, Amala Paul and Amrita Puri all do a decent job and collectively make the drama work.

At eight episodes, the story feels stretched a lot. It could have been crispy handled considering the final arc of the narrative related to Shankar. At the end of it all, there will definitely be a feeling that enough has been milked of late Parveen Babi, and it’s time to leave her alone.

Overall, Ranjish Hi Sahi is a decently made emotional period drama. It is based on a real-life story and overdramatized for the series. Watch it for the compelling acts and if you have no clue about the life of Parveen Babi.

Apart from Tahir Raj Bhasin, Amala Paul and Amrita Puri have critical roles. They are the three pillars on which the emotional drama rests. Amala Paul has done well in a part that offers her a star turn. She looks like trying hard as a ‘star’ but is good in the emotional and breakdown parts.

Amrita Puri starts off playing a background supporting role but soon grows in prominence. She comes into form during the series’s second half (set). All her emotional scenes are dealt well with the class. Zarina Wahab playing the mother, is another solid character. She essays it with much-needed elegance and depth, even though the role feels a little underwritten.

Paras Priyadarshan is fine as a brother, and the actor essaying Jagan mohan stands out among the rest. The rest of the actors fit their part even though they have minor roles.

The music by Aabhas, Shreyas Prasad Sashte is good. There is an old-world charm and melody to them, much like the albums from Vishesh Films banner. The cinematography by Sumit Samaddar is alright. Given the seventies background, it could have been much better. Abhijeet Deshpande’s editing is decent. There is an intentionally slow pace to let the drama build. It works to an extent but eventually feels overdone.