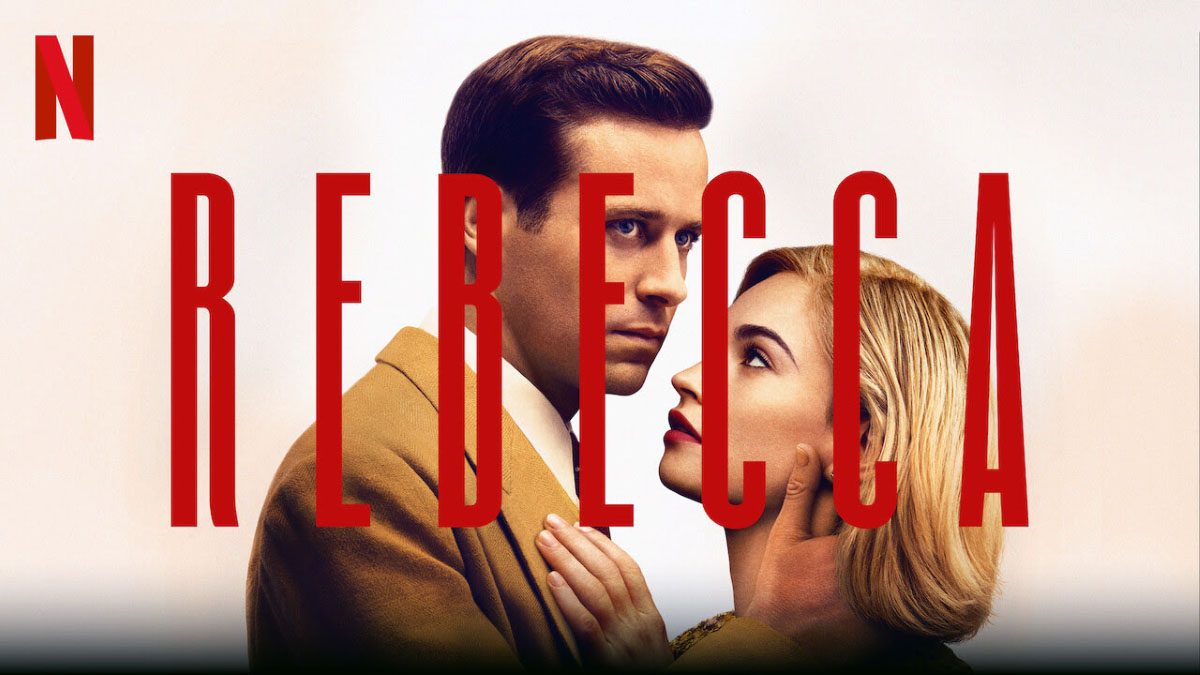 BOTTOM LINE: Visually Stunning, But Lacks The Sinister Spookiness Of The Source Material

Skin N Swear: No nudity or swearing; a few kisses here and there

Netflix’s latest original movie ‘Rebecca‘ is an adaptation of the celebrated 1938 novel of the same name, written by English author, Dame Daphne du Maurier. Rebecca is directed by Ben Wheatley, off a screenplay by Jane Goldman, Joe Shrapnel and Anna Waterhouse. It is produced by Working Title Films.

The protagonist (Lily James), whose name is never revealed in the movie, as in the 1938 novel, is a ‘lady’s companion’ to the wealthy and crass Mrs Van Hopper. The movie opens with the duo vacationing in Monte Carlo, where they happen to meet wealthy and well-known widower, Maxim de Winter (Armie Hammer). Maxim takes a fancy to the naïve and nubile protagonist, wooing and sweeping her off her feet in a whirlwind romance that ends in him marrying her and whisking her off to Manderley, his sprawling and majestic estate in the South of England, in Cornwall.

Once at Manderley, the narrative shifts tone, going from romantic to bleak and baleful. The newly married Mrs de Winter has to contend with ghosts of the past, in the form of the memories of Rebecca, the first Mrs de Winter and Maxim’s dead wife. The house is haunted by memories of the seemingly perfect and exquisitely beautiful Rebecca, and its people are still under her spell, including the protagonist’s newly minted husband, and Manderley’s intimidating housekeeper, Mrs Danvers (Kristin Scott Thomas).

As our protagonist struggles to make a place for herself at Manderley, Rebecca’s sinister shadow threatens to unravel her marriage, until a terrible secret spills out into the open, spurring her to fight to save her fledgling marriage.

Lily James gives off the right vibes as a gauche middle class girl who is enamoured by the suave and sophisticated Maxim de Winter. Her breathless naïveté at the beginning of the movie is pleasing to behold. She holds her own through her character arc, as her character slowly grows and evolves into a woman determined to fight the odds.

Armie Hammer is perfect as Maxim de Winter. Though we won’t compare his Maxim with the stalwart Sir Lawrence Olivier’s turn in Sir Alfred Hitchcock’s 1940 Rebecca, we must aver that he brings a certain brooding quality to the role, which sits nicely with his chiseled looks. Dame du Maurier wrote her Maxim de Winter to be a 40-year old, but the younger version of the character is apt for the contemporary setting of Ben Wheatley’s version.

Kristin Scott Thomas is terrific as the fearsome and forbidding Mrs Danvers. She brings the right touch of tenacious intensity to convey the manic obsession Mrs Danvers has for her dead mistress. She excels in the scenes that depict her cruel manipulation of the state of mind of the new Mrs de Winter. The last few scenes, when she totally loses it, linger on in your mind for long after.

The rest of the cast lends able support to the narrative. Sam Riley is particularly good as the creepy and sleazy Jack Favell; Ann Dowd is suitably loud and crass as Mrs Van Hopper; while Keeley Hawes shines as Beatrice, in the few significant scenes she has in Netflix’s Rebecca.

Netflix‘s version of Rebecca has been panned universally by most reviewers, all of whom have judged its merits, or lack thereof, based on Alfred Hitchcock’s 1940 original. We beg to differ with the consensual view. The comparisons, in our view, are hasty; not to say, grossly unfair. Ben Wheatley has consciously chosen to make his version distinctly more cheery, bright and colourful than Hitchcock’s dark and sinister Rebecca.

The movie starts off with that memorable, haunting phrase – “Last night I dreamt I went to Manderley again”, just like the novel, and just like Alfred Hitchcock’s original. But the spell is broken even before it is cast. Much as we would like to dwell upon the imposing edifice of Manderley, the narrator takes us to the South of France, to Monte Carlo, to the whirlwind romance between Maxim de Winter and the narrator. The romance is hewn in tender, delicate notes, unlike the dispassionate courtship of the black and white original, where the besotted couple did not share even a single passionate kiss or embrace. The ardent lovemaking in Netflix’s Rebecca gives credence to the blossoming love between the two.

It is in the scenes at Manderley – the most significant portions of the narrative – that Wheatley flounders somewhat. His Rebecca most definitely lacks the sinister spookiness that made the novel such a riveting read, and that Alfred Hitchcock captured with practiced expertise in his 1940 iteration. The Gothic eeriness is missing, as is the air of haunting suspense.

The scene where the new Mrs de Winter explores Rebecca’s, magnificently furnished room was superbly shot by Hitchcock, auteur that he was. The play of light and shadow in the black and white version is brilliant, to say the least, imbuing an ominous foreboding to the proceedings. Rebecca’s rooms, in the 1940 version, appear to be a living, breathing entity, almost as if possessed by the spirit of Rebecca. Ben Wheatley takes a more refined, prettier approach here. Rebecca’s chambers, spoken of in deliberately hushed tones by the creepy Mrs Danvers, are stunning to look at, but alas, lack that particular, spooky touch. The same can be said for the entire mansion. It is lavish and luxuriant, where grim and ghostly would have worked better.

Several scenes are stretched, some are outright needless – the surreal ball sequence, for instance; or the horse-riding sequence with Jack Favell. What is better in Netflix’s Rebecca is the interaction between Mrs Danvers and the new Mrs de Winter – tinged with the former’s intense dislike for the latter, and the latter’s feelings of inadequacy, more than apparent in several scenes. The 1940 film failed to capture Mrs Danvers’ deep resentment that Kristin Scott Thomas conveys so beautifully.

We also loved the play between Beatrice and the protagonist, especially when she eggs her on to buckle up and fight for her love. The second half of the narrative, starting from Maxim’s confession in the boathouse, is also shot and directed extremely well, dare we say, better than Sir Alfred Hitchcock’s exalted version.

Lawrence Olivier may have been a celebrated actor, but as Maxim de Winter, he was dull, insipid and not convincing enough. Armie Hammer’s Maxim is way better – brooding, most times, and spirited when needed. There, we said it. Which does not mean that we have decided to overlook that abomination – that mustard suit, worn by the wealthy Mr de Winter on two consecutive days! We have not! That mustard suit has no business being in a film as pretty as this, amidst otherwise exquisitely designed clothes; and making Hammer/de Winter repeat it the very next morning is weird AF. Jeez, even regular middle class guys don’t repeat clothes when out to woo a pretty girl.

All said and done, Netflix’s Rebecca may be pretty and picture perfect, much like a typical Mills and Boons kitschy romance, but it keeps you glued to the seat. It is certainly low on the haunted, spooky feeling, but is nevertheless a fascinating watch, despite all its purported flaws. Comparing Netflix’s Rebecca with the Hitchcockian one is doing a disservice to both. It also doesn’t make an iota of sense. Rebecca on Netflix is most certainly worth watching, and maybe, watching again on a cold winter day of the approaching months.

Clint Mansell’s original soundtrack is uplifting, but the background score is a letdown. It gets on your nerves after a while. The narrative would have benefitted with a more keyed in background score.

The cinematography by Laurie Rose is stunning. Monte Carlo is captured beautifully, as is Manderley. The shots are structured to show off the beauty of the actors, the locales and the lavishly mounted sets.