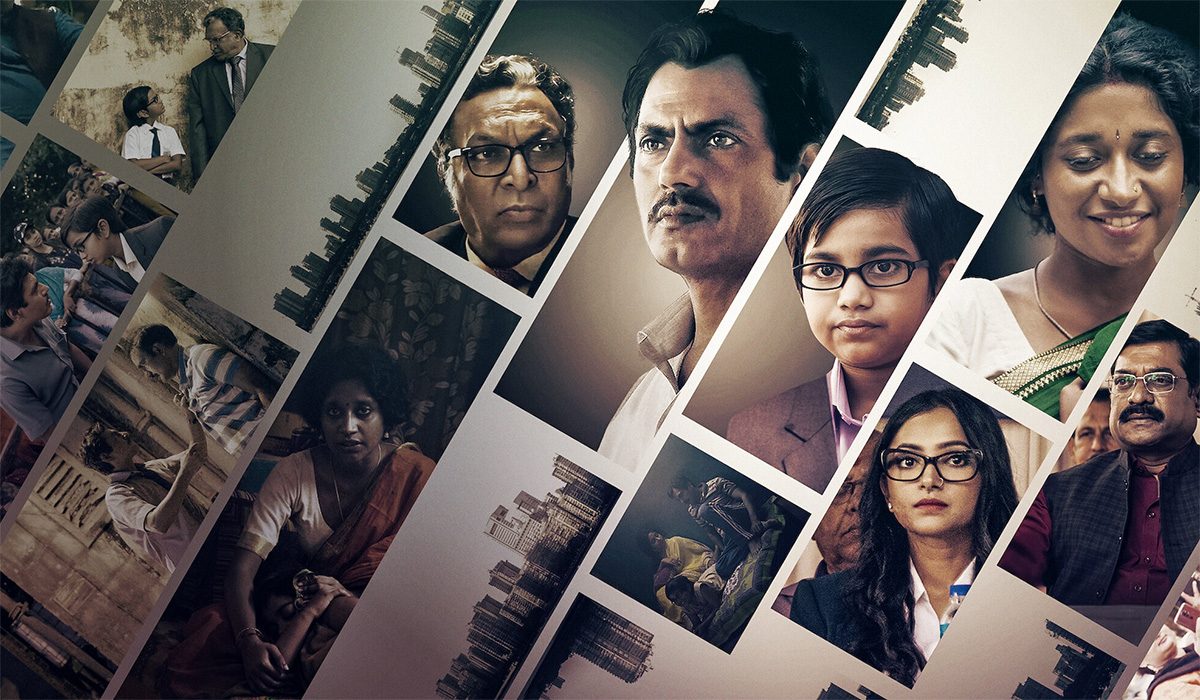 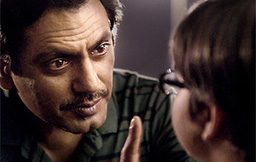 Netflix’s latest Original film Serious Men is a blistering satire on the isms that make up Indian society – oft-repeated ones like casteism, classism, opportunism; and in a departure from the common – elitism and supremacism.

Adapted from Manu Joseph’s award-winning book of the same name, Serious Men is a sharp satire of the prevalent culture in the modern world – of celebrating a chosen few for their genius/success/money/fame/caste, and shoving the rest of mankind into obscurity. Nawazuddin Siddiqui’s Ayyan Mani calls such people — the ones who look down upon common folk like him — as ‘Serious Men’.

Ayyan Mani is a uniquely placed individual in the Indian scheme of things – he is a Tamilian, but a Dalit. Hence, his Tam-Brahm boss, renowned astrophysicist Aravind Acharya (Nassar), to whom he is PA, looks down at him, looks through him, and humiliates him at every given opportunity.

All his life, Ayyan’s heard himself being called moron, imbecile, knobhead by Acharya. To add to it, the ghosts of his dalit past, when his manual scavenger parents and grandparents lived on the obscure fringes of society, constantly gnaw away at his mind.

He decides his only kid Adi (Akshat Das) will rise above this. And Ayyan sets out to make it happen. He formulates a well-thought out plan to prove to the world that his son is a genius. TV media, social media, Twitter followers, Likes and Comments all play a role in elevating the boy to celeb status. But is the boy’s genius the truth, or a well-planned scam? 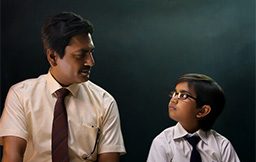 Serious Men is Nawazuddin Siddiqui‘s show all the way. The actor fills every frame with the sheer power of his acting prowess. Nawazuddin is impeccable in his role – bringing his trademark censure and cynicism to the character of Ayyan. Siddiqui transforms so effortlessly and seamlessly into Ayyan Mani that you forget the man on screen is just ‘acting’. That’s the thing about Nawazuddin Siddiqui – when he’s on screen, Nawazuddin the star ceases to exist, and only the character he’s playing lives.

And it’s this trait of his that separates him from the stereotypical Bollywood star. You can’t not see the Shah Rukh in the Rahul, the Aamir in the Rancho, even the Boman in the Virus. But with him, the Nawazuddin melts away into nothingness, leaving behind only the character he’s playing – as it happens in Serious Men.

Diminutive Akshat Das holds his own before the towering presence of Nawazuddin Siddiqui. He gives a measured and restrained performance as fraud and flawed wunderkind, Adi. The rest of the cast in Serious Men give commendable performances too. Nassar is perfectly cast as the scientist with a superiority complex. Indira Tiwari is great as Ayyan’s wife Oja. Shweta Basu Prasad is poised and polished as the opportunistic aspiring politician Anuja. 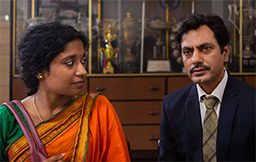 With Serious Men, director Sudhir Mishra has rediscovered his mojo, and how! It is easily one of his best works till date – bold, yet soft at the core; satirical, yet sanguine in perspective. He weaves Manu Joseph’s tome into riveting storytelling – armed with the stellar skills of his writing team, of course – primary screenwriters Bhavesh Mandalia and Abhijeet Khuman, and additional screenplay writers, Niren Bhatt and Nikhil Nair.

The narrative of Serious Men is heavy with an overwhelming undercurrent of satire — the kind that compels one to ponder and think. And yet, Serious Men is not serious. It is cheery, it is witty, it is funny – though the humour has a bite that is sharp and scathing. Serious Men does not wallow in self-pity nor does it loll in self-absorbed unhappiness. It is just like the dialogue spouted by Anuja’s character in one of the scenes, when she tells her hanger-ons, “next time no ‘Dalit woman victim card’ shit for me, please”. The narrative too doesn’t resort to the poor dalit card to win audience sympathies. It shows, instead, an Ayyan Mani who time and again knows how to twist that card to get exactly what he wants. An Ayyan Mani who is capable of channeling his angst into cracking ribald jokes on his boss or scheming his downfall, and hitching his own way out of the squalor.

It’s obvious Ayyan Mani has a massive chip on his shoulder – owing to his ancestors, the treatment meted out to him by his boss, and his place in life – he calls himself a small molecule in the universe. But he turns that chip into a blazing gun, using his keen observations to his advantage. Working with Aravind Acharya teaches him one thing – society bows only to that it does not understand. And he moulds Adi into spouting high funda scientific mumbo jumbo to dazzle the media, the masses – even Adi’s school authorities – of his seeming genius.

Along the way, the narrative touches upon myriad facets of living in the melting pot that is India. The Principal of Adi’s school dangling the scholarship carrot to persuade the Manis to convert to Christianity; Ayyan’s diatribe against casteism at the time of Adi’s admission; Anuja and her politician father Dhawre (Sanjay Narvekar) invoking their dalit identity, and even Babasaheb Ambedkar, to win the predominantly Dalit residents of the chawl they want to redevelop – each sequence is fleeting…but telling.

Several moments stand out in the narrative – compelling one to think despite oneself. Acharya’s abhorrence of Ayyan talking to him in Tamil is revealing – both may be Tamilian, but there’s a huge chasm dividing the two – Acharya is a Tamilian Brahmin — self confessed supremacists —while Ayyan is a Dalit, considered the lowliest in this country. Ayyan’s scathing dialogue in the admissions sequence is affecting, when he says people have converted honest labour – manual scavenging – into a cuss word. As is the story behind the huge frame that is the centrepiece of the snooty art gallery – Ayyan’s story.

The two hours of Serious Men are packed with layers and nuances – some undiscovered and unseen – just waiting to be revealed with each subsequent viewing. 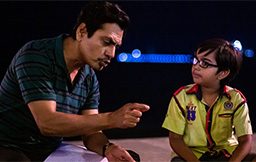 Besides boasting some of the best script, screenplay and direction of recent times, Serious Men also has outstanding cinematography by Alexander Surkala. Each scene speaks to the viewer, telling a story of its own, embellishing the narrative with a distinctive dynamism.

The background score by Karel Antonin is delicate and refined. It is deliberately underplayed, thereby focusing our attention on where it should be – on the narrative.

The final number ‘Raat Hai Kaala Chhata’, composed by Francis Mendes and sung by Swanand Kirkire, is both poignant and playful – an apt end to a serious yet not-so-serious film.

The story drags in some parts