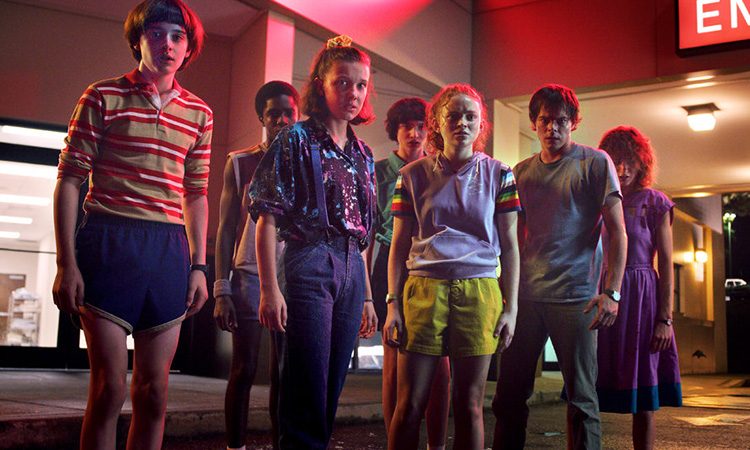 The town of Hawkins has got a new mall that has become the centre of attraction. Only, people don’t know the secret operation going under its basement that once again involves bringing a powerful and horrific another world Demo-gorgon back to life.

How the kids, who are each facing their own personal challenges in emotional dealing, and adults, trying to move on from past happenings, get involved in the uncovering of secret Russian mission is what the series is all about? 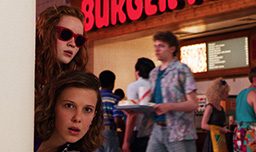 The series doesn’t have one individual lead the show, but among the entire cast, only David Harbour (as Jim Hopper) can be taken as “Hero” with his characterization and acting. The first season was a turning point in the career of Harbor who became a star, like many others, post its release.

In its third season, we get a feeling that a star is acting the part rather than an actor. The whole body language and attitude have changed, and he is given enough regular ‘action-hero’ type of moments. He is brilliant in all of them channelling the old school stars with raw mass appeal.

However, the same, ‘free-spirited’ star turn also makes it look over-acting at times. He gets into hyper zone time, and again, that doesn’t match with his big personality. That seems to be acknowledged by the writers as well, who have written it via dialogues.

Leaving that over the top issue aside, David Harbour does enough to leave a strong impact. The emotional engagement of the climax works because of him. It is the connection with his character and the screen presence he exudes.

Stranger Things Season 3 is an improvement over the last season concerning the entertainment. However, it feels more formulaic now, compared to the last one. As far as comparison with the first part is considered, they feel like different entities altogether, even though they all feature the same artists, and set in the same universe.

The creators of the show The Duffer Brothers, along with executive producer Shawn Levy and Uta Briesewitz share the directorial credits of the third season. Together, they have made a blockbuster movie type of season with all the thrills and fun in place with a very routine drama driving the core emotional sub-plots.

Much like the town of Hawkins which is enamoured with the new mall, and having a ball, the makers are doing the same with the predictable tropes of the genres and mixing and matching it with teen romance and drama.

They don’t do anything drastically different to shake the audience out of their familiarity, which could be a bummer for few, as the proceedings appear repetitive. The Hopper and Joyce track is the prime example. The outburst of Murray played brilliantly by Brett Gelman feels so relatable, as a result. 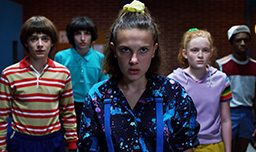 However, the few emotional chords they strike with their charismatic presence and the arcs that are created with new and old characters are sure to connect with the people who prefer routine, but emotionally fulfilling outings.

Predictability aside, the pace and action are relentless and consistent with it’s over the top nature of the action. A different set of pairs indulge in the same sort of acting, which is why everything works as a blockbuster package deal. Stranger Things 3 a showreel of best of adventure and horror genre with bits of action and thrill thrown. Everything is done with a keen sense of fun.

Apart from the repetitive and predictable nature of the narrative, the other part that might disappoint a few is the science angle. There is very less of it, and that too has been not utilised to its full extent. Stranger Things 3 is mostly a teen drama and an entertaining one at that, courtesy an incredible ensemble.

In the end, if you are a fan of the previous two seasons, the third one is easy to lap up. It is popcorn entertainment for teens. Those who were disappointed with the second season here is a narratively focussed fun-filled outing. In short, it is a perfect binge-watching material.

Stranger Things consists of a long list of actors. First, we take up the seniors. Winona Ryder continues her form into the third season as well. She too is more animated compared to the previous seasons but fits into the overall scheme of things. All her scenes with David Harbour involve high pitch acting, and if not for seasoned artists like them, the narrative would have collapsed for all the bickering they go through.

All child artists are fantastic. Millie Bobby Brown is, of course, the star of the show along with Gaten Matarazzo. They just take off from where they had left, and so do the others. Together with Caleb McLaughlin, Finn Wolfhard, Noah Schnapp, and Sadie Sink, the chemistry and emotions are adequately developed. The subplot involving the teenagers coming of age too has come out well with brilliant writing and emotional understanding of the content by these child artists. 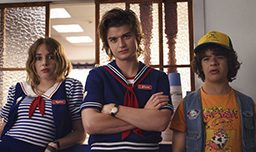 Steve Harrington has been used in a different role and is immensely lovable here. He makes the best use of his charming skills without getting into the pretentious zone. Maya Hawke is the new addition, and she along with Steve Harrington crate ruckus and wins hearts. Natalia Dyer and Charlie Heaton seems to be stuck in a time warp. Priyah Ferguson, Dacre Montgomery, and Brett Gelman, are given something more this time, and they revel in newfound material. Priyah is a scene-stealer. Andrey Ivchenko seems to be modelled on The Terminator’s Arnold Schwarzenegger and the actor does a good job with it.

The music (original and sampled) and cinematography of the show is spectacular. These, along with the artwork and set designs, take us back in time and make us relieve the glorious 80’s period of the US. The editing is slick and keeps the narrative alive full of energy. The writing is superb. The visual effects have gotten better with each season, which could be a direct result of increasing budget.

Stranger Things 3 Review by Siddartha ToletiFollow us on Google News