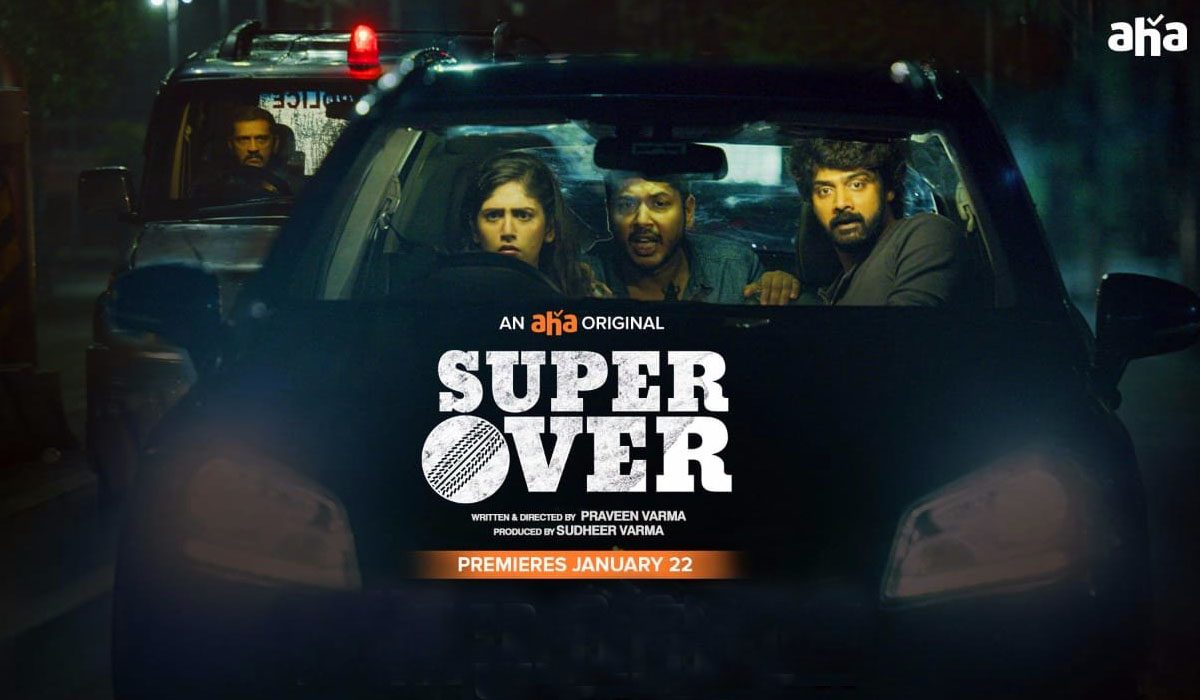 Kasi, Vasu And Madhu are long-time friends. When Kasi has trouble repaying the debt to loan sharks, he decides to go the gambling way. He starts betting on cricket. What happens next? Did he win the required amount and settle the debt? Or is there a cruel twist in the store is what the movie Super Over is all about?

Naveen Chandra, Chandini Chowdhary, and Rakendu Mouli play the three primary characters in the movie. They are buddies and stay together most of the time. As far as acting is concerned, there is a dual structure here. First, they have to exhibit group chemistry and secondly make a mark individually.

The three actors do well as a single unit as friends. There is nothing in it, but they show some spark. When it comes to the individual space, Naveen Chandra is obviously the leader of the pack. He is light years ahead of the other two. Rakendu Mouli and Chandini Chowdhary have nothing much to do apart from showing some sparkle as a group, that’s it.

Late Praveen Varma directs Super Over. The debutant deceased during the making of the film. Sudheer Varma took over the onus on him to deliver a finished product.

The story of Super Over is wafer-thin as are the characters. It is a movie where the entire story takes place within a night. The film is shot for the most part on the roads of Hyderabad.

Keeping the story in mind, Super Over is a challenging subject to execute. It is heavily dependent on the screenplay and the writing to sailing over. The late director Praveen Varma scores in the former but fails on the latter.

Right from the opening, there is a laboured effort to create the bonding between the three friends. The actors put in the effort and do their best, but the lacklustre writing lets them down.

The reason to take up betting is not engaging emotionally or dramatically. The whole opening segment is rushed to get to the point of betting. Things start to get little momentum and interest as the betting sequences begin, and the narrative reaches the ‘Hawala’ transfer stage.

It is here that the straightforward story takes a turn with a different screenplay structure. We get the same tale from the other characters point of view. It adds some much-needed energy to the proceedings and also hooks the viewer intermittently.

The narrative also moves faster as if not to give the audience a chance to think. It is alright, but it becomes an issue when we have multi-people POV screenplay focusing on a core thread. There is a visible muddled proceeding in parts.

Still, the way various threads are connected and the small twists that take place (including the ending) make Super Over passable. With a little bit of breathing room and better writing, the movie could have been on par with the late director’s producer Sudheer Varma’s trendsetting debut flick.

Overall, Super Over works in parts due to the fast-paced screenplay. The actors have no scope, and the writing is a let-down making it a middling fare.

Ajay and Praveen play the other crucial parts in the movie. They are adequate even though they don’t have much to do. Ajay plays a ‘cop’ again and Praveen is seen in a serious role. Viva Harsha continues his fine form. He is present only for a couple of scenes, though.

The background score by Sunny M.R is neat. It gives extra zip to the racy screenplay. The cinematography by Divakar Mani is good. There are specific frames which make the look rich despite the low budget production overall. The editing by SR Shekar is decent. As mentioned previously, the writing is mediocre and a significant reason for the disappointment in the final output.

Yes, for a digital watch. It’s a passable thriller.