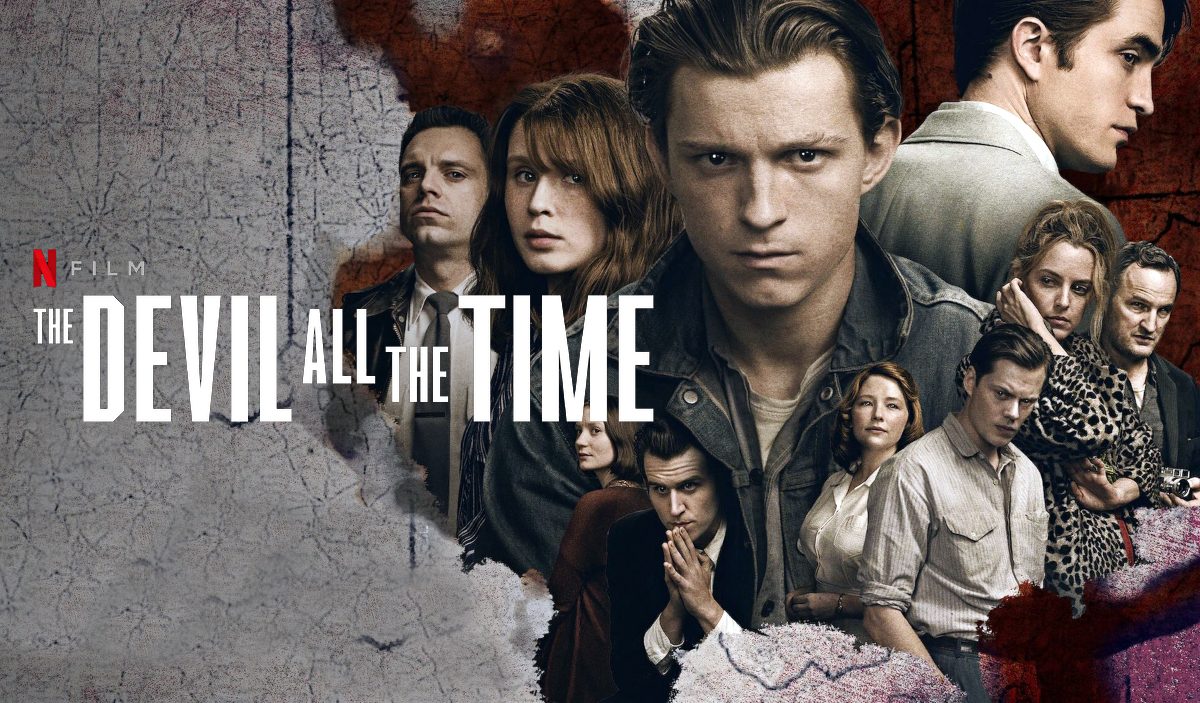 Netflix‘s latest original movie, The Devil All The Time, has been adapted from Donald Ray Pollock’s eponymous 2011 novel by director Antonio Campos. Incidentally, Donald Ray Pollock himself acts as the narrator of the tale.

The Devil All The Time is a Gothic noir story, set in small town Ohio and Western Virginia, in the towns of Knockemstiff and Coal Creek. The narrative spans the period between World War II and the Vietnam War. Sordid characters with even more sordid deeds to their name populate the narrative.

The movie begins with World War II soldier Willard Russel (Bill Skarsgård) coming across a crucified Sergeant General in the South Solomon Islands. The scene shakes him to the core, and compels him to give up religion and take to bouts of violence. He settles down with wife Charlotte (Haley Bennett) and son Arvin (Michael Banks Repeto) in Knockemstiff, and gradually rebuilds an uneasy relationship with religion. After the death of his parents, an orphaned Arvin is taken in by his grandmother in Coal Creek, where he grows up (Tom Holland) with a stepsister, Lenora (Eliza Scanlen).

Along the way, we meet characters that are deviant, corrupt, sinister or outright evil. The new preacher in town, Preston Teagardin (Robert Pattinson) is a priest with questionable morals. Deranged preacher Roy Laferty (Harry Melling) pours a jar full of creepy crawly spiders as the final flourish to his sermon. He also indulges in one of the most reprehensible acts in the movie. Corrupt Sheriff Lee Bodecker (Sebastian Stan) has his finger in multiple illegal trades. Twisted couple Sandy (Riley Keough) and Carl (Jason Clarke) is the most sinister of the lot. Carl has a sickening fetish. He derives sadistic pleasure in luring young handsome strangers to have sex with Sandy, photograph them nude and then murder them in the most gruesome manner.

In the end, the three stories converge in the most unnerving way, with Arvin caught in the vortex of the sin that sweeps through the tale, rendering the final deliverance. 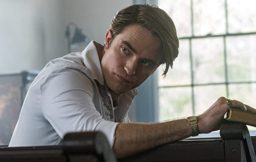 Tom Holland and Robert Pattinson steal the show in the acting department. Tom Holland, as Arvin, leaves the cherubic Peter Parker of the Spiderman movies far far behind. He starts off as innocent, gradually easing into a darker tinge to his character, and doing it so convincingly. It is a leap of faith for him, one that lands him in a good place.

Robert Pattinson studs his performance with flamboyance and flourish, lending it memorable touches such as the nasal twang to his tone, the flashy frilled shirts, the condescending looks he casts on his awed subjects. His sermon sequences are especially outstanding, particularly the one where he holds forth on the delusional and disbelieving. 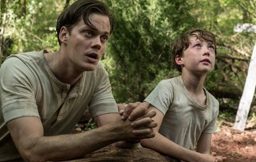 The Devil All The Time is as distressing as it is compelling. You cannot take your eyes off the screen or the characters, even as the always dark, always gory story unfolds before you. The atmospheric horror engulfs the viewer; the sins committed in the shroud of faith stun. Early on, a young Arvin is initiated into questionable rites of passage by his father Willard, who tells him, “There’s a lot of no-good sons of bitches out there.”

Religion, and the way it affects the small town folk, plays an important part in the narrative, and plays out in terrifying ways. Lies, deceit, crime and sin in the name of religion – of Christianity – take centrestage. Roy believes his faith will resurrect his dead wife; Willard bargains with God to spare his wife’s life by crucifying his son’s pet — the fleeting shot of the dog nailed to the cross is disturbing. But Carl’s idea of faith is the most distressing. The narrator – Pollock – says for Carl, “Only in the presence of death could he feel the presence of something like God”.

The narrative may seem a bit slow and stretched to some. But honestly, its atmospheric horror and pervasive evil affect one in ways that are subtle and indiscernible, staying with you long after you’ve finished watching the movie.

The music and background score of The Devil All The Time uses a lot of slow, affecting numbers from that period in time. The effect is breathtaking, and somewhat, heartbreaking.

The cinematography is stunning. Reportedly shot on 35-millimeter film by cinematographer Lol Crawley, it captures the small town milieu in a way that needs watching to be experienced rather than reading it. The desolate forests, the tree-lined thoroughfare, the verdant banks are hardly ideal locales for horrifying crimes to be committed — which is what makes the cinematography even more evocative.

The narrator bit could’ve been curbed somewhat. It takes telling rather than showing to another level altogether, often narrating the thoughts and reasoning behind each character’s actions.

‘The Devil All The Time’ Review by Binged Bureau