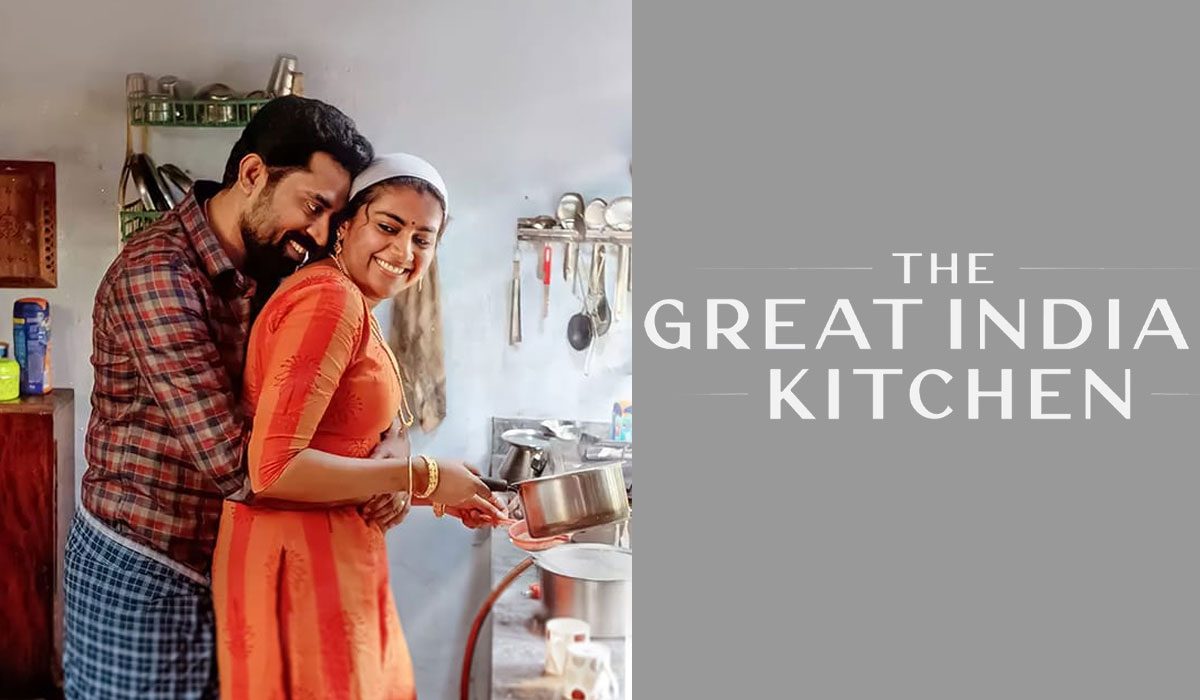 The Great Indian Kitchen is about a newlywed couple and how difficult is it for the modern woman/wife to adjust to the traditional house-wife space seeped in patriarchal values. 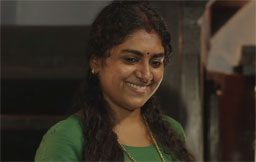 Nimisha Sajayan playing the housewife is terrific. The character has been written with great detail and contains finer moments. The actress has done a stellar job in bringing across those minute changes. It is very critical that they are brought out otherwise the entire script would be flat out unbearable.

More than anything, Nimisha neatly expresses the gradual tiredness and weariness along with frustration. We feel her pain, and that’s where she succeeds.

Apart from the apparent plot (no matter how wafer-thin, it is) what makes The Great India Kitchen work is the execution. It is gripping and slick.

The opening sets the tone where on one side we have mouth-watering dishes being made and on the other, we get introduced to the key characters and their world one after the other. The pattern continues right until the end.

So, we have a whole lot of time dedicated to the household chores of the women. From the preparation for the cooking to the utensils, they wash, to the serving and the final cleaning and so-on. Everything is shown in detail. It looks repetitive initially, but soon we realise its importance when the context around it changes with each passing sequence.

The dialogues take a backstage to the proceedings for most of the runtime. For that matter, even the actors. At points, we only see the household works being done, with the frames focusing solely on the activity (cooking, cleaning, washing etc.) instead of the person doing them. It is a beautiful idea which strikes home the point without any melodrama. 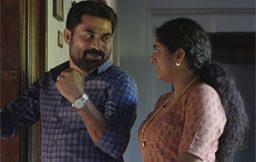 And when the conversations happen, they add to the drama without being too melodramatic either. Only the heroine gets focus in that aspect, and it feels right looking at how the whole thing is set up.

The husband asking the wife to say sorry, the guest suggesting how to make black tea, the subsequent cooking is done by the ‘men’ in the house, etc. the scenes appear with brief intervals, but they sure leave an impact on the point they want to convey – the deep-rooted naturally seeped in centuries old patriarchal mindset of men. It is so natural and brought out realistically. The identification at a personal level is sure to happen to every male.

Not only the men, the women who are part of the narrative also are used effectively to convey the same point. They have limited screen time, but each appearance makes the story richer in subtext.

After such a painstaking build-up, it is all about giving a proper finish. It is here that The Great India Kitchen wobbles a little as it progresses towards the end. The whole ‘Sabarimalai’ angle seems to be force-fitted into the narrative. The same ending that could have been reached without taking this route is the feeling that one might get. The decision she takes is also entirely justified via the narrative.

Overall, The Great Indian Kitchen is an age-old and straightforward story that is grippingly told. The lead actors do a fabulous job along with tight directorial effort. Give it a try, even if you might be bored in parts due to the repetitiveness.

The Great Indian Kitchen doesn’t comprise of many artists. It is also shot in a single location mostly. Sooraj Venjaramoodu as the husband is superb. It is an effortless work by him. An understated manly ego is subtly presented without too much fuss or drama. It does get a bit dramatic towards the end, but it is okay. T Suresh Babu has limited dialogues and scenes, but he is visible throughout carrying a routine of sorts. It is crucial for the film, and he gets the job done. The rest of the actors appear intermittently in tiny parts that do help take the narrative forward. 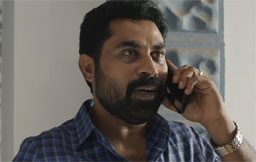 Sooraj S Kurup and Mathews Pulickan are credited with the music. The movie has a couple of songs, but they appear at the start and end only. The rest of the narrative is mostly sound mixing that can be felt instead of a background score. The day to day sounds of cooking, cleaning and washing etc. is what we hear. It is superbly executed. The cinematography is adequate, but editing by Francis Louis is excellent. The writing is alright as in it gets the critical moments when it matters, right.