Home Reviews The Irishman Review – A Classic Closure To Gangster Genre From Its...
Binged Rating3.5/5 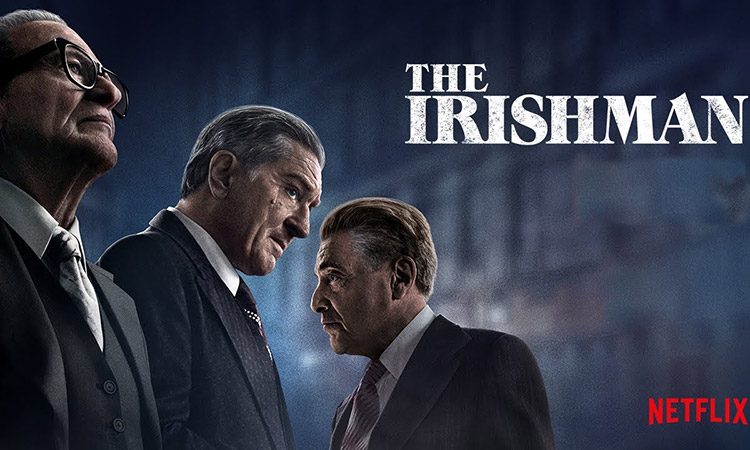 BOTTOM LINE: A Classic Gangster Drama From Legends Of The Genre

The Irishman is about Frank Sheeran (Robert De Niro), a truck driver who supplies meat. How a regular guy becomes a hitman for a top mafia family and syndicate, Buffalino, courtesy Russell (Joe Pesci)? What are the circumstances that led him to meet Jimmy Hoffa (Al Pacino), and subsequently their growth as friends? And finally, where they all end up?

The above is the broader outline of the story. There are a lot of subtext and layers to it involving the working of a mafia family, and the power-hunger? And then there is the personal equation of Frank Sheeran (Robert De Niro) with his family. 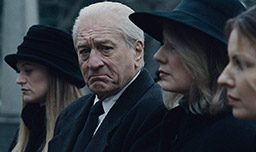 Robert De Niro is a legendary actor whose acting credentials need to special mention. While there is no question of his ‘acting’ abilities, he has been part of many junk movies for a large part of his current career. Most of it is done for financial purposes. With The Irishman, Robert De Niro once again gets a chance to demonstrate his phenomenal ‘acting’ skills in a well-crafted and observant manner.

On the performance part, Robert De Niro brings out the non-intelligent dumb persona of a hitman very well. He is brute force, but lacks the intelligence and makes them reach a higher level in the mafia system. It is this aspect that is wonderfully portrayed by the actor and showcased in a very restrained and understated manner. The small expressions do all the talking. It is right in all the scenes involving Peggy (Frank’s daughter).

The one minor quibble here could be the dubbing at younger ages. We have already lived through that part of the career of Robert De Niro. So, when the actor is de-aged through the latest technology and is seen younger, visibly, the voice lacks the same more youthful vibe. It is the old –De Niro trying to sound younger. Luckily, there is always a voice over to cover that aspect. But, this a minor issue in a highly satisfying outing. 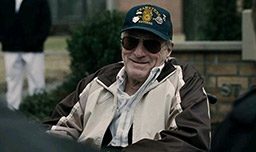 Martin Scorsese is a master craftsman. He is more in command when dealing with the gangster sagas. All his previous works are classics in the genre, and The Irishman adds to the list.

There is indeed nothing new in the setting and story, in general, in The Irishman. The core plot points are the same, involving money, power, and greed. The inter-personal relationships, the power dynamics between the key players and the drama, on the whole propelling the narrative – it is all the same. But, it still has to be executed to perfection. And there are only a handful of films that come close in that regard.

Most, if not all, fail to generate the emotional connection, bring out the high stakes power-game into play and all such final plot details that take the narrative forward. A film like The Irishman in any other inept hands could quickly turn into a meandering and muddled mess that is also a snooze fest at the same time. It is here that Martin Scorsese succeeds and having explicit knowledge of the terrain inside-out, brings out a fresh take to the stale tropes and ends them on a beautiful and poignant note.

The core characterisation of Frank Shareen and the final thirty minutes involving his character and the way things end up around him separates The Irishman from countless other gangster flicks. The closure of Buffaline family and how an era ends before the eyes, and the disregard shown by a new generation, gives The Irishman the fresh spin to make it relevant, and timely.

The abundant nostalgia and the melancholic feeling, adds to the depth. The narrative is unusually slow for a Martin Scorsese flick, but it is needed for the end to work. It is the point the movie wants to drive home. The final shot, related to the door, couldn’t have been more symbolic and poetic. It suggests an end of the era and simultaneously leaves a small space for the opening by not closing it entirely.

The fact that over three and a half hours, there is no feeling of fatigue or the narrative going for a toss (even in parts), further displays the control and mastery of the director and the screenplay written.

For the sheer joy of watching legends acts together under a legendary director, The Irishman is a must-watch. But, The Irishman makes sure there is more to it than mere ‘special attraction’. It truly captures the magic of an era and presents it as an epic glorious concluding chapter. The extra effort makes The Irishman special and a classic for future generations to come. 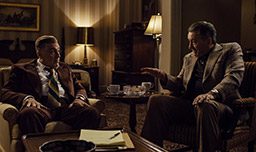 Al Pacino plays Al Pacino as only he can with all the grandness and glory intact. He lives through the character of Jimmy Hoffa. All the scenes involving him and Robert De Niro is a treat. Both do what they are meant to do with ease without an iota of one-upmanship in place. It could be the effect of the age, but, it’s a treat to watch them together in such fully developed roles.

Apart from them, Joe Pesci has another brilliant role. Once again, more than the performance it’s the historical weight (through his previous work on the terrain) that he brings to the table which works to elevate the proceedings as they should be. With another actor in his place, it might not be the case.

The rest, outside these three key players, have smaller parts. But, they are impactful in the narrative nonetheless. The characters and their moments stand out even during the short duration. It exhibits the prowess of impeccable writing and direction, and the actors justifying their presence.

Robbie Robertson provides a lively score that also simultaneously adds a melancholic tinge to the proceedings. The cinematography by Rodrigo Prieto is excellent. It combined with the set work effectively transports us to the old era. The editing by Thelma Schoonmaker is fantastic. To hold the attention with so much happening and so many artists without leading to chaos is terrific. The screenplay by Steven Zaillian is superb. Basically, the entire technical team has come up with superlative efforts to make The Irishman a memorable outing for ages.

The Irishman Review by Siddartha Toleti