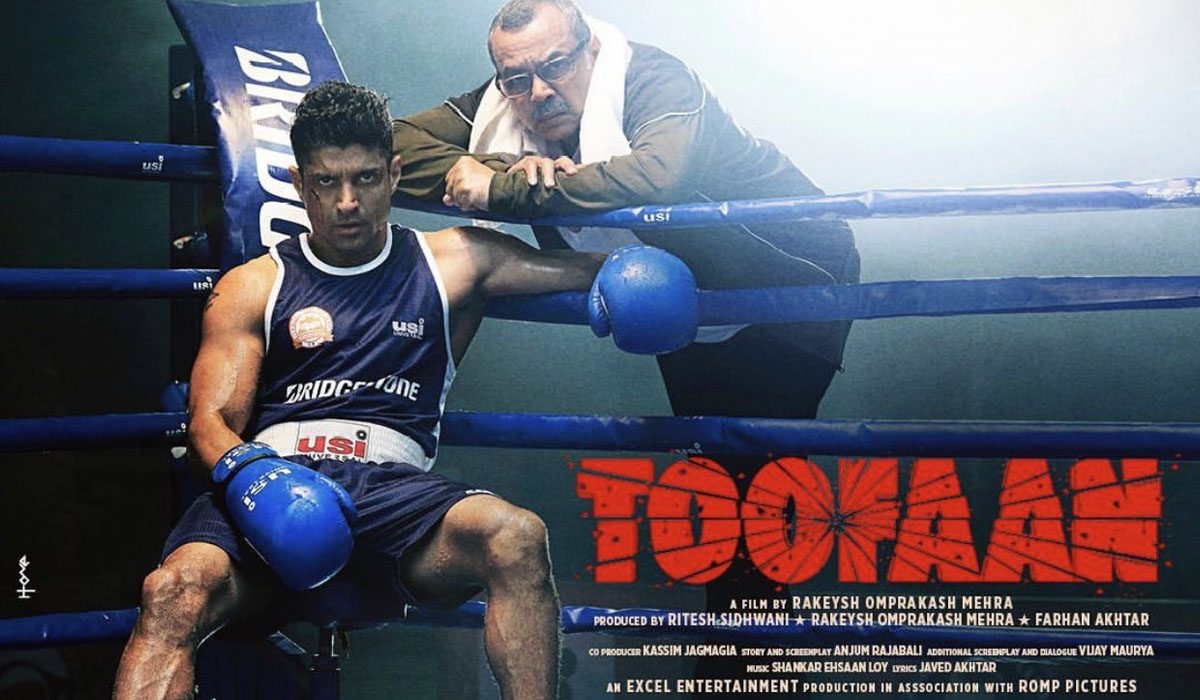 BOTTOM LINE: A Cringey Boxing Spectacle… Minus the Boxing

Skin N Swear: One kiss scene and a few swear words in Hindi

Aziz Ali AKA Ajju Bhai is a gangster who works as an enforcer for Jafar Bhai alongside his friend, Munna. One day, when he goes to visit his trainer friend, he happens upon a boxer who is training. His friend introduces him to the world of boxing through Muhammad Ali videos and he gets hooked. Aziz now wants to be a boxer but he has to prove himself to Nana Prabhu, a famous boxing coach who happens to live in his area. Will he be able to convince him to take him on as a student and help him leave his old life behind?

The standout in this film is Paresh Rawal who portrays Coach Nana Prabhu. Of course, the film leads Farhan Akhtar and Mrunal Thakur, who portrays Aziz Ali and Dr. Ananya Prabhu gets most of the screen time and leave a few memorable tidbits throughout the movie, but Rawal manages to make a worthless script look …slightly less worthless (Not his fault, the scriptwriter failed him). Hussain Dalal manages to be in the movie. Supriya Pathak and Darshan Kumaar are okay, but that’s because of their lesser on-screen presence.

The lead protagonist comes from the streets. He meets a woman in an “unconventional way”. The woman is disgusted by him and then sees his sensitive side – instantly making him attractive. The protagonist finds his “path” and a coach to train him. The woman, now his love interest, motivates him. He wins a few matches and becomes a renowned athlete. He then does something that will make him hated in the eyes of the public, his coach (teammates and peers, if he has any) and love interest. He is unable to take up the sport for some reason. He gets a chance to come back to the sport later in life for which he will somehow find the motivation. His love interest will die for additional motivation. Eventually, even his coach will take him back. He will undergo a lot of training and miraculously start winning (even though he has been out of the game for years), eventually reaching the finals. He will then become the winner with a comeback victory. Cut to black.

This flick somehow manages to stick in so many sport film conventional genre clichés without any fresh ideas, that the movie’s existence is almost astounding. Sure, some of the aforementioned clichés may be out of order in this film but many parts of this movie can be seen in other sports dramas like ‘Southpaw’, ‘Sultan’, ‘Captain’ among others .

And calling this movie a boxing film is kind of a stretch. Toofaan is more of a cringey romance film which is themed around boxing – which doesn’t even have any proper on-screen chemistry between the two lovers (Aziz and Ananya). Actually, Coach Nana Prabhu’s love for coaching had more onscreen chemistry than Farhan Akhtar and Mrunal Thakur (which is saying something).

Talking about the coach, choosing Paresh Rawal as the boxing coach is actually funny. He has to play a nuanced, famous, bad-ass boxing coach and a loving father – both wrapped up into the role of a closet Islamophobe. And if the script isn’t as bad as it is, he might have actually pulled off the role. And still, he somehow manages to be the best actor on screen – showing his prowess as a talented actor (and how awful the script is). Still, there are a few decent scenes on screen, with one of the best ones featuring Paresh Rawal suddenly bursting into tears. That is truly unexpected and actually heart-wrenching. A brilliant piece of acting, which is surrounded by cinematic excrement (sorry, hve to be blunt here).

Speaking of Islamophobia, Coach Nana Prabhu’s hatred for Muslims comes out of nowhere in this movie. We find out the reason for it eventually, but the introduction and the handling of the topic is so poor and unrequired that even if the topic is left out of the film, the ending of the film isn’t going to change. Plus Nana Prabhu’s acceptance of his son-in-law still doesn’t address his Islamophobia – which is ridiculous. Also the forced Hindu-Muslim marriage/ couple issues-thing iss badly written and portrayed onscreen.

Mrunal Thakur is fine in some parts, but gets downright cringey and cheesy whenever she is onscreen. Which is not her fault, the script is shite. We believe that the scriptwriter doesn’t not know how to write dialogues for women. We understand that her on-screen character is Aziz’s motivation, but she gets a little overboard with her role (which we blame on the director).

Now, we come to the film’s lead actor, Farhan Akhtar. He is a good actor, we all know this – but in this film he is absolute filth. The character he portrays, Aziz has one of the weirdest routes to boxing portrayed on screen. Aziz’s personality varies from scene to scene and that gets old real fast. He is supposed to be a gangster with a heart of gold, but what happened to the orphaned kids after he got married? Did they all magically turn out to be okay? We do not blame Farhan though, we blame the scriptwriter and the director instead.

There are multiple other issues with this movie – the movie’s pacing is bad, the runtime is unnecessarily high and there are too many songs in the movie – and many of the songs get repeated multiple times in the film, taking up a major chunk of the film. The movie also has a ridiculous amount of cringe dialogues, Ananya’s death is foreshadowed in the beginning of the movie, which was easily discernible and the last round of the finals was extremely unrealistic. And these are just from the top of my head. After all this bashing, here are the very few good things in the movie – Paresh Rawal and the previously mentioned crying scene, the boxing commentators and training montages. That’s it.

Overall, Toofaan is the Fantastic Four (the 2015 reboot version) of Sports Movies – A guide for filmmakers on how to not make a sports drama. The movie didn’t bring anything fresh to the genre and is filled with sports film clichés.

Paresh Rawal is the only actor worth watching this film for. Hussain Dalal who plays Aziz’s best friend is very forgettable in his role. The character development of characters such as Jafar Bhai (portrayed by Vijay Raaz) and Maqsood Bhai is cringey and poorly portrayed on screen. Supriya Pathak and Darshan Kumaar get mentions because their characters have equal importance in the movie.

Cinematography is good. Music is overkill. Some of the songs are fine, but there is overdependence on the songs to carry this movie – and the attempt fails badly. However, the titular “Toofan” song works well with the montage scene, which is one of the few memorable moments in this movie.

Lack of Onscreen chemistry between Farhan and Mrunal

The number of Songs

The forced Hindu vs. Muslim narrative

Not really. Some moments are okay, but it gets too cringey and predictable.

Not exactly. But it is made for the hopeless romantics. And even they might not watch due to lack of on-screen chemistry.