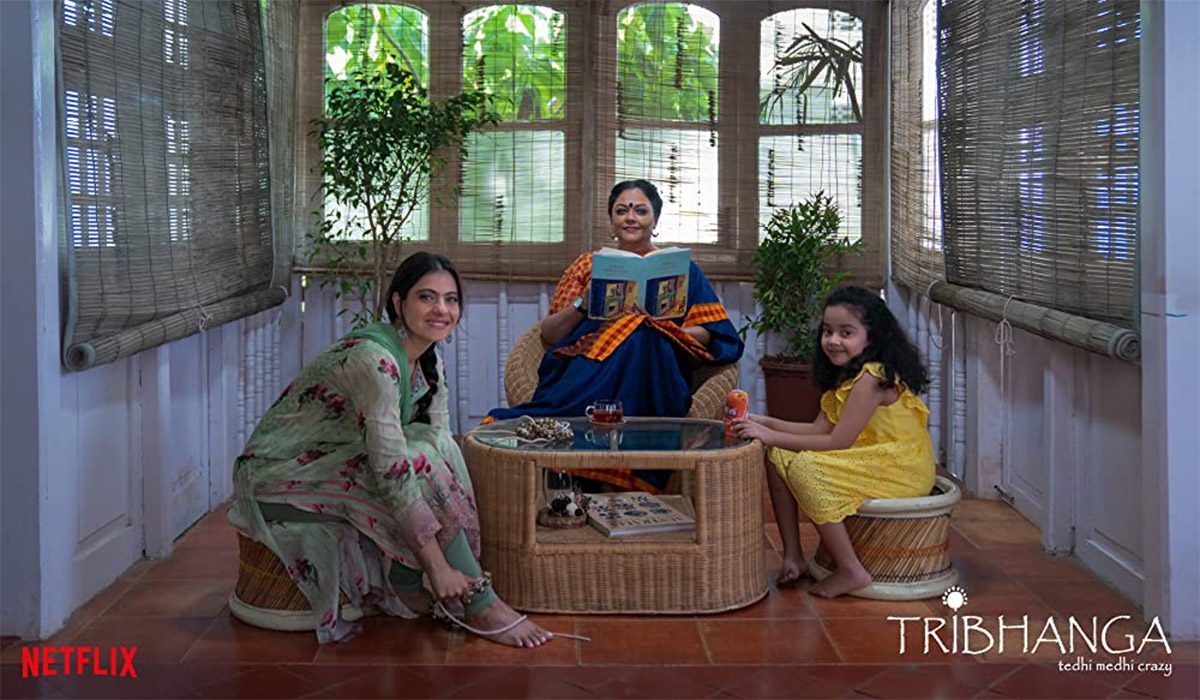 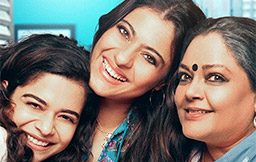 Netflix’s latest original film ‘Tribhanga‘ stars Kajol, Mithila Palkar and Tanvi Azmi as three women of three different generations of a dysfunctional family. It focuses on the complex interpersonal relationships they share. Nayantara Apte (Tanvi Azmi), aka Nayan, is a gifted writer, who has smashed her way through patriarchy, to realise her gift for words and to live life on her own terms.

Nayan’s daughter Anuradha Apte (Kajol) is a popular Bollywood star and Odissi exponent, who shares a strained relationship with her mother. Yet, Anu shares a wonderful relationship with her own daughter Masha (Mithila Palkar), and is fiercely protective of her. Anu is compelled to do some fierce soul-searching with regards to her mother, when Nayan goes into a stroke-induced coma.

The film oscillates between the past and present, from the late 1980s to present times, as it looks at life through the lens of these three women of diverse views and experiences. 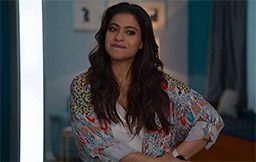 Tribhanga has been written and directed by Renuka Shahane. It is her debut film as director. The movie is produced by Ajay Devgn, Parag Desai, Deepak Dhar, Rishi Negi, Siddharth P Malhotra and Sapna Malhotra, under their respective banners, Ajay Devgn Ffilms, Banijay Asia and Alchemy Films.

Tanvi Azmi and Kajol both sparkle in their respective roles. It is a joy to watch them on screen. Mithila Palkar is as dependable as ever. Kunaal Roy Kapoor is truly the hidden jewel of Indian content. He makes every role and every scene his own. Kanwaljeet’s cameo is sweet, while Vaibhav Tatwawaadi and Manav Gohil are adequate in their limited roles. 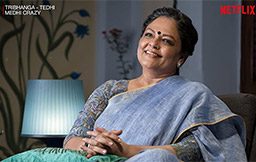 Is a woman who chooses her career over marital bliss wrong to do so? Is she blameworthy if she puts her passion before a secure, settled life for her children in their paternal home? Is she condemnable if she walks out of a marriage that stifles her, and comes at the cost of her own mental peace and happiness — to forge a reality where she lives life on her own terms, dances to her own drumbeat, gives realisation to her innate talents?

The conservative Maharashtrian society that forms the milieu of Tribhanga certainly thinks so. But in the case of Nayantara Apte, played with restrained finesse by Tanvi Azmi, she is condemned as guilty even by her own children, Anuradha and Robindra (Vaibhav Tatwawaadi). Anuradha, played with typical fiery verve by Kajol, resents her mother with a vengeance. She holds Nayan responsible for every little thing that has gone wrong in her life. Including the darkest chapter in her life, when she was a vulnerable fourteen-year-old.

Yet, despite Anu’s crushing resentment, we gradually understand that Nayan is an emancipated woman in the true sense of the term. Apart from living her life the way she thinks is best for her and her children, she doesn’t judge her daughter for her questionable life choices. Throughout the narrative, the audience is privy to Nayan’s reasons for doing all that she does. Kunaal Roy Kapoor’s Milan Upadhyaya is the narrative’s means to that end. He is an aspiring writer, and Nayan’s biographer, and is awed by her talent. But Anuradha isn’t – neither awed, nor privy. Resentment is all that she feels for her mother. 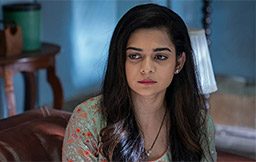 In her own eyes, she is the perfect mother to her daughter Masha. In one of the most affecting scenes of Tribhanga, her illusion is broken one day, when she comes face to face with some unsavoury truths.

Unsavoury truths is something Tribhanga revels in. It shows us the folly of assumptions – of assuming that our loved ones will understand our fears, misgivings, and God forbid, a difficult situation in our life – even if we don’t voice them aloud. Patriarchy, shrewish mothers-in-law, domestic violence, child sexual abuse, spineless men, entitled kids, petty misunderstandings, regressive schoolteachers – the film is overstuffed with unsavoury people and truths – all, as predictable as they come. Yet, Tribhanga doesn’t feel overstuffed. It feels like the perfectly soft, cosy chair, that one sinks into and finds comfort in, at the end of a particularly tiring day.

In the crisp 1 hr 35 minutes runtime of Tribhanga, Renuka Shahane manages to convey a wealth of emotions, feelings and hard truths — first through Nayan’s story, then Kajol’s, and finally Masha’s – all three as diverse as can be, and yet strikingly similar. Similar in their ability to have cascading effects in the lives of those they hold dear.

The strongest point of Renuka Shahane’s fledgling though impressive storytelling skills is her ability to show and not tell. In fact, her storytelling borders on the obsessive when it comes to the “show, don’t tell” tenet of filmmaking. She leaves most things for her characters, and us viewers, to understand — without lengthy exposition or soppy dialogue. Another vital aspect of Tribhanga is that it never takes the moral high ground nor indulges in preachy sermons. Every character is flawed in its own way, and the narrative embraces the flaws without rancour or bitterness. 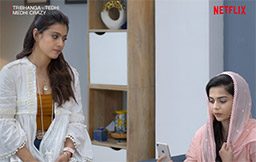 The strikingly honest storytelling of Tribhanga makes one wonder whether Renuka Shahane has plucked its story from her own life – her mother is the celebrated writer Shanta Tai Gokhale, a much-venerated, much-celebrated writer, who had separated from Renuka’s father early in their marriage.

The last sequence of Tribhanga is particularly beautiful – and affecting. Three generations of females captured on film together, each indulging in the source of their happiness, while the camera zooms in on the idyllic scene on loop. Beautiful!

Tribhanga is a lovely watch, and essential viewing for all the mothers and daughters — nay — all the women out there.

The background score of Tribhanga is passable – nothing to write home about. Baba Azmi’s camerawork is excellent and evocative. He captures the old-world charm of traditional Maharashtrian homes beautifully. Jabeen Merchant’s editing is crisp and efficient.