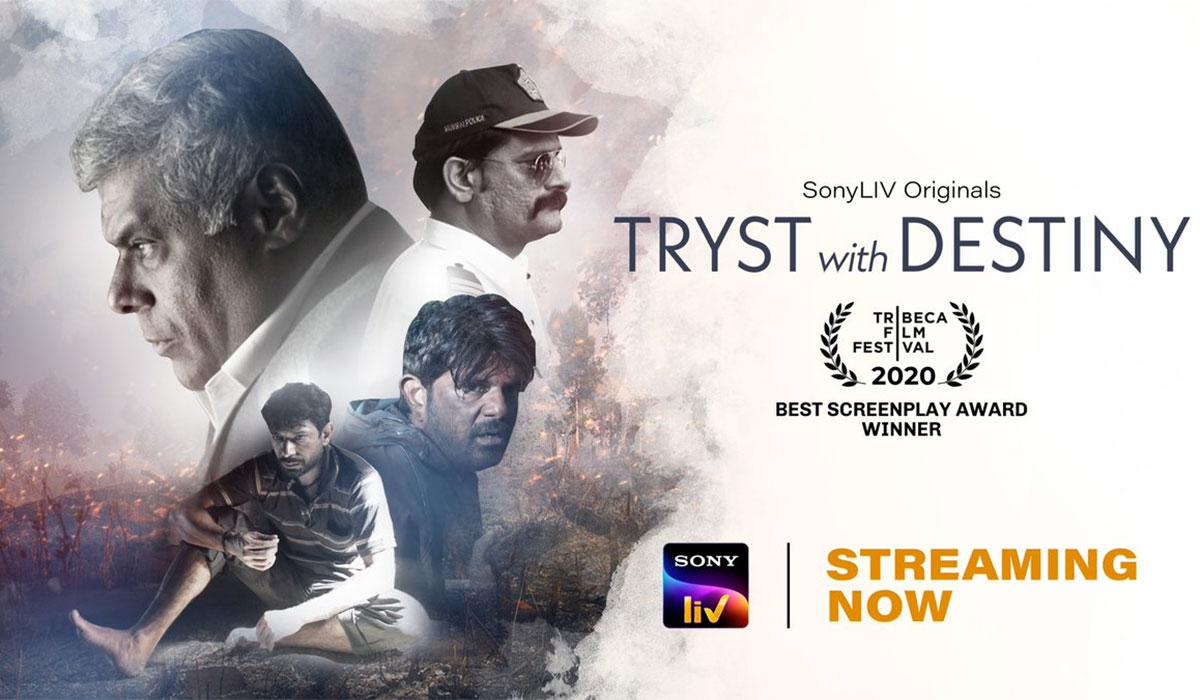 SonyLIV’s ‘Tryst With Destiny’ debuted in the form of a film at the Tribeca Film Festival, where it won its writer-director Prashant Nair the award for Best Screenplay. The film has been chopped into an anthology series of four episodes for streaming on SonyLIV.

‘Tryst With Destiny‘ weaves four diverse stories from the social fabric of India, each highlighting a specific issue that plagues the country. Discrimination – based on caste, class, colour and living – juxtaposed against a fast-changing India forms the basis of the anthology.

‘Tryst With Destiny’ is remarkable for one reason alone – it is studded with an impressive ensemble cast that comprises the best of talent in the Indian film industry. And each actor has brought their best skills to the table, to the effect that the series is defined by the glittering performances of the cast. Ashish Vidyarthi is solid in the first episode, ‘Fair And Fine’, and keeps the focus solely on himself in the entire runtime. Jaideep Ahlawat is blistering in the episode titled ‘1 BHK’. Palomi Ghosh lends him commendable support.

Amit Sial impresses in the rather sketchy ‘Beast Within’, as does Gitanjali Thapa. Alas, both stellar actors are wasted in this inconsequential last episode of the anthology.

Finally, a huge shout-out for the outstanding Vineet Kumar Singh in ‘The River’. The actor conveys a gazillion emotions without uttering a single word—nay, a single sound—in the entire 30-minute episode. Helplessness, vulnerability, despair, despondency; and then tenderness, caring; relief at a temporary respite; and finally, rebelliousness, defiance, bravado – myriad emotions flit across his face easily and effortlessly, even as he lets a curious and constant stillness envelop him throughout the runtime. It is a terrific performance from Vineet Kumar Singh, and the definitive highlight of ‘Tryst With Destiny’. Kani Kusruti steps up to the plate to match him perfectly. Both don’t utter a single word, allowing silence to tell the moving story. Yet, it is still Vineet Kumar Singh’s show all the way.

As is obvious, ‘Tryst With Destiny’ is named for the famous speech Jawaharlal Nehru delivered, when India got its independence from British rule. It is also obvious, as one watches subsequent episodes of the SonyLIV series, that Prashant Nair‘s ‘Tryst With Destiny’ conveys, quite forcefully, the fact that even 75 years after independence, we as a country have failed to live up to that destiny as envisioned by our forefathers. While the world seeks to move beyond discrimination of every kind, we are still stuck in an endless limbo, bound by petty ‘isms’ – colorism, casteism, classism, and others of their ilk.

So we have a ruthless business tycoon who, when stripped off the trappings of his wealth, is still judged and ridiculed for the colour of his skin. And a traffic cop who takes to corruption to pander to the expensive demands of his classist girlfriend. There’s an unconvincing man-animal conflict that underlines a gaping urban-rural divide.

And finally, a poor, hapless dalit who must give in to the daily sexual assault of his wife at the hands of the privileged upper-caste men of his village. The last is the best episode of the anthology. ‘The River’ is a triumph of stellar storytelling – it leaves you perturbed, distressed and moved beyond words. The haunted look of Vineet Kumar Singh’ character as every night, he hears raucous men take turns to rape his silently screaming wife; his palpable relief when an unexpected curfew in the village gives the couple an unlikely respite from the daily humiliation; his slow implosion that finally explodes into an unanticipated ending – ‘The River’ is a terrific episode in every way.

One likeable thing about the anthology is how episodes spill over into each other, forming tenuous links within the anthology – it’s a deft touch of consummate storytelling. The peacocks, the sprawling Banyan tree, characters wading into other episodes – all of it gives a surreal feel to the anthology.

All said and done, ‘Tryst With Destiny’ on SonyLIV has a hit, a miss and a couple of average episodes. But despite that, it is worth a watch, if only for the performances and well-written characters.

Naren Chandavarkar and Benedict Taylor’s background score elevates the storytelling in most episodes. It does get on the nose sometimes, but is good overall. Xavier Box’s editing is faultless.

The real star of the series, however, is Avinash Arun’s exquisite camerawork. His cinematography in Tryst With Destiny is absolutely brilliant, imbuing the myriad narratives with a distinctive timbre and mood. The beautifully shot sequences heave with enigmatic undercurrents, especially in ‘The River’. Great stuff, this.

The episode titled ‘The River’

The episode titled ‘Beast Within’