BOTTOM LINE: Spirited Performances & Harrowing Visuals Do Nothing To Elevate An Ordinary Story 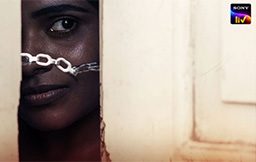 Welcome Home is the latest Original film from the stables of SonyLIV. It is a story that delves into the dark corners of disturbed minds; and portrays the extent of pure evil that humans with deranged minds are capable of.

Welcome Home is directed by Pushkar Mahabal, written by Ankita Narang and produced by Paresh Rawal, Swaroop Sampat Rawal, and Hemal A Thakkar.

Two teachers at the local government school in a far-flung Maharashtra town, Anuja (Kashmira Irani) and Neha (Swarda Thigale), are sent on census duty to nearby areas. The last stop on their list is an isolated house in the middle of nowhere.

Once inside the house, they realise that something is terribly wrong in the place. Census done, they leave the place, but disturbed by several things they had observed at the place, the foolhardy girls return to dig deeper. And are caught in the dark whorl of terror that unfolds.

Kashmira Irani and Swarda Thigale have put in spirited performances as Anuja and Neha respectively. We do feel invested in their plight, even if for a short while. After that, ennui creeps in involuntarily. The rest of the cast is strictly OK, nothing to sing hosannas about.

Psychological horror and gory visuals have been done to death on web shows in recent times. OTT entertainment in India has come to be synonymous with dark, violent, no-holds-barred content. There’s something about the no-censorship web space that compels filmmakers, writers and directors to let go of restraint and restriction in depicting the dark side of human nature.

Welcome Home falls into the above category of entertainment. Which is also why it fails to hold us in thrall for very long. Similar shows with far better plot, performances and treatment have been hitting the streaming space with tedious regularity. To be utterly honest, viewers have been driven to the point of ennui by the endless stream of shows and movies masquerading as grim, dark and compelling fare. Which begs the question – how much more of the same kind of content can one bear?

That, however, is not the only thing about Welcome Home that rankles. The pace of the narrative is slothful, the novelty of plot non-existent ; and the script is lackadaisical. Not to say, the foolishness of the girls in going back to a house that gives off distinctly evil vibes makes one want to give them a whack on their thick heads. Come to think of it, that is not the only foolish thing they do in the movie. They are two dumb females who had it coming. And it irritates the hell out of us.

Most places, the director relies on tried and tested tropes such as ominous background music, rolling thunder and creepy-looking people to create a sense of foreboding and terror. Gory, harrowing visuals are stuffed into the narrative, only to titillate. Even those fail to evoke fear and misgiving in the viewer. The ploy may have worked if the writer and director had etched out better characters. Not a single one of the antagonists succeeds in terrifying us to the core — neither Bhola (Boloram Das), nor Amma (Akshita Arora), and certainly not Ghanshyam (Shashi Bhushan). The latter in fact reminds one of a benign grandfather who hands out boiled sweets to all the kids in the family.

Nothing about Welcome Home impresses – neither the plot twists, nor the gory visuals. Filmmakers need to up their novelty quotient by notches if they want to keep viewers engaged in their efforts – which are currently going down the drain, for no particular fault of theirs. 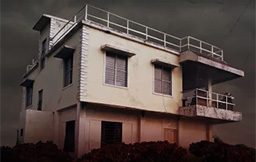 The background music by Meghdeep Bose is subtle and restrained, when it could very well have been screechy and grating; which is quite a commendable thing to pull off. It is also the only good thing in the technical department. The camerawork by Saee Bhope just about passes muster, while the editing, by the director Pushkar Mahabal himself, is average.