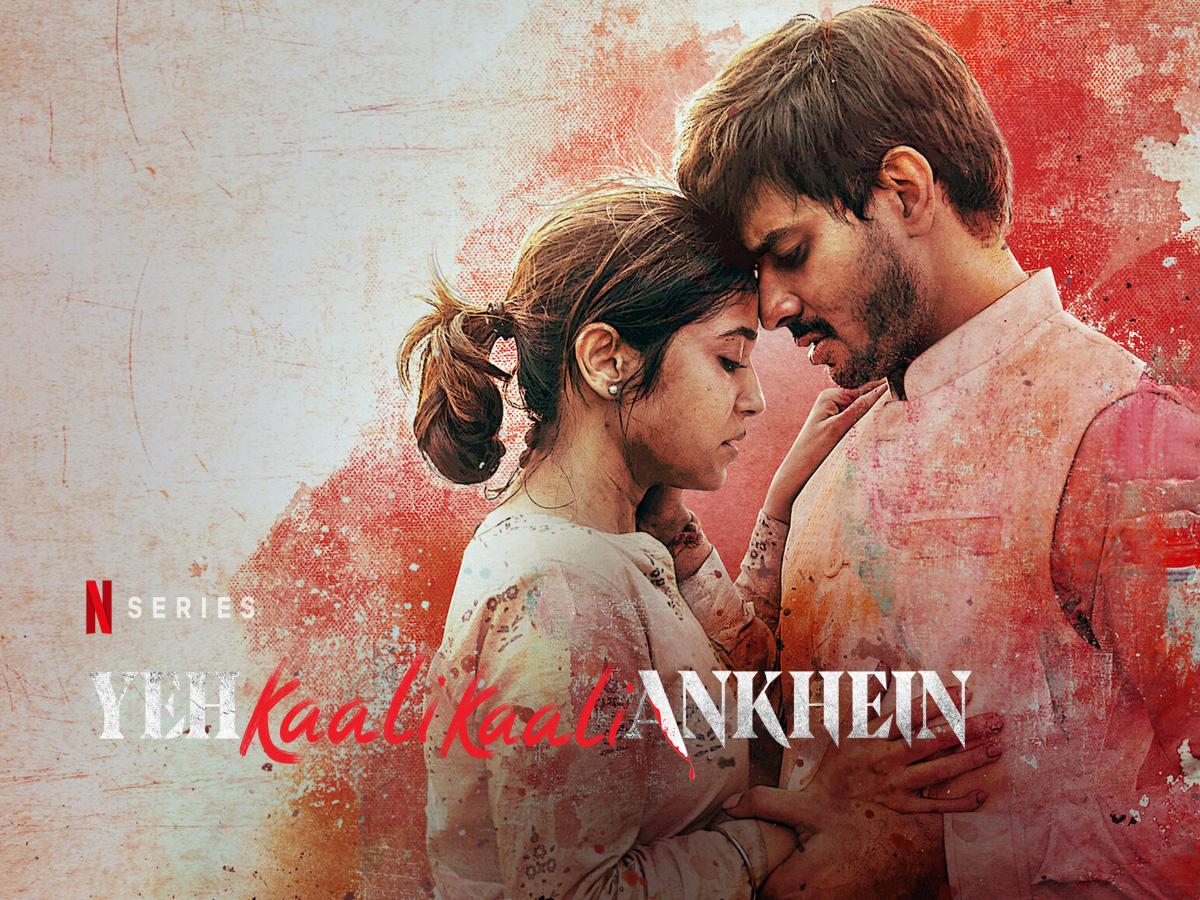 Vikrant is son of accountant (Brijendra Kala), working for Akheraj (Saurabh Shukla). The latter’s daughter, Purva and Vikram, study in the same school. Purva has had a liking for Vikrant since school days, but he avoids her like the plague.

The story of Yeh Kaali Kaali Ankhein takes off when Purva’s infatuation leads her to marry Vikrant against his will. It is done under extraordinary circumstances and hiding the fact that Vikrant is already in love with another girl Shikha.

What are the circumstances under which Vikrant marries Purvi? What happens after the marriage? Where do Vikrant’s anger and helplessness against Akheja take him is the series’ overall plot.

Tahir Raj Bhasin springs a pleasant surprise in Yeh Kaali Kaali Ankhein. The actor is known more for his gritty, raw, and rooted antagonist parts. Here in the series, he plays a precisely opposite role of them. He displays a level of vulnerability that isn’t seen before.

As a performer, Thahir Raj Bhasin nails everything that comes his way. However, the inconsistent writing and character graph don’t allow Vikrant to become a memorable part. It is a good act and stays that way.

Multiple directors handle Yeh Kaali Kaali Ankhein, which Siddharth Sengupta creates. It is a simple story on the surface, with the basic framework reminding one of the Shah Rukh Khan starrer Chaahat from the ’90s.

Yeh Kaali Kaali Ankhein is one series where the opening sequence is not to be missed. There is nothing path-breaking here, but it helps in strengthening the drama that follows once the story takes off.

After an intriguing opening, the narrative takes time to settle as the story’s world is established. Everything is on predictable lines, but what makes it all work is the writing, casting and the lovely music wherever accompanied.

The beginning few episodes following the predictable path are alright. At times, the narrative feels lacking in balance and comes across one-dimensional as a result. The way Vikrant is forced to surrender to the will of Purvi and her family makes him look too weak.

It is only when Vikrant slowly starts to take charge and appear strong – the first face-off with Purvi’s brother defending his friend Goldie that there is some excitement. From then onwards, there are neat twists and turns around the corner.

The problem is the far-fetched and sometimes illogical nature of the character development and the subsequent twists. Every time a new turn happens, it takes us in a whole new direction. It creates plot holes and inconsistent narrative.

Still, what holds attention is the undercurrent fear of doom (established at the very start). Where and how things take a dramatic turn is what keeps one hooked. The ending looks fine, and things are set up neatly for the second season.

Overall, Yeh Kaali Kaali Ankhein is a passable watch at best. The inconsistent narrative and gaping plotholes, and characterisation make it a not so satisfying watch. If you are in a mood to watch some heartland drama and action, give it a try, but keep the expectations low.

The casting of the series is a major asset. Everyone looks apt for the part and does well whenever the opportunity arrives. Anchal Singh is a perfect fit, looks and body-language wise. The glamour side has been utilised neatly along with an air of undercurrent arrogance. Shweta Tripathi is fine playing typical girl. She is at the opposite end of the spectrum who wants to settle and make a small home. Shwetha shines when her dramatic moments arrive.

More than anyone, though, it is Saurabh Shukla who steals the show. The only issue is we have seen him do the same before, which robs off the freshness. There is a menacing and gripping quality to the narrative whenever he arrives. Brijendra Kala is fine, as usual. Kalp Shah shines with his friend act. Arunodaya Singh is wasted, but there seems big part for him in the next season. The rest of the cast is alright.

The original score and background music by Shivam Sengupta and Anuj Danait are excellent. They are initially a significant reason for going ahead with the proceedings, even when it’s predictable stuff. The cinematography by Murzy Pagdiwala is superb. The rustic hinterland feel is there, but it looks very colourful at the same time. The editing by Rajesh G Pandey is alright. Some portions could have been edited better, especially related to action. The writing is par for the course considering the milieu and previous such attempts in the space.