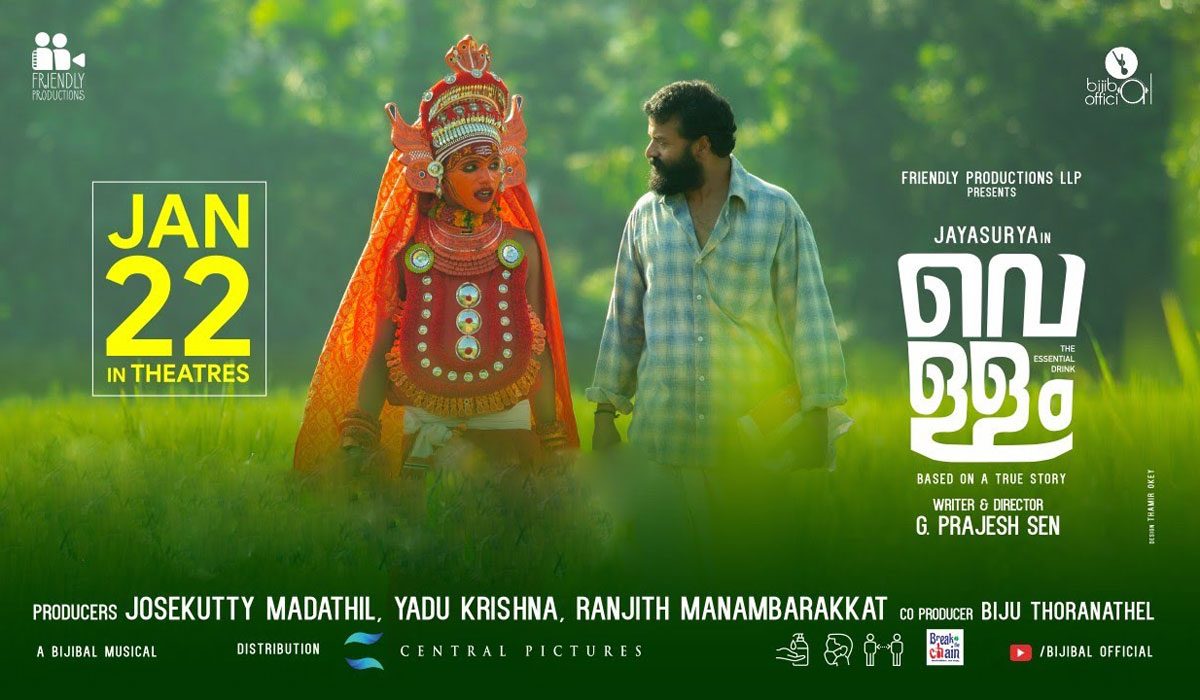 The much anticipated Jayasurya starring feature, Vellam: The Essential Drink will drop today, on 22nd January 2021, in theaters. But what many don’t know is that Jayasurya will make history today with the theatrical drop of Vellam: The Essential Drink. Jayasurya’s film Sufiyum Sujathayum became the first Malayalam film to officially be released direct-to-OTT (last year), while his Vellam: The Essential Drink will become the first Malayalam movie to be released in theaters, after the nation-wide pandemic lockdown. We haven’t had a chance to compile a list for this specific category yet, but we don’t think there is any other actor (Regional, Bollywood, International or otherwise) who can boast such an accomplishment.

Vellam: The Essential Drink like most other to-be-released-in-2020 films, had to scrap its previous release date in April 2020 and had to be postponed for the (ongoing) coronavirus pandemic. The movie finally got the green light to be theatrically released, after the Chief Minister of Kerala, Pinarayi Vijayan announced that the theaters of Kerala will be allowed to run from 5th January onwards, at 50% capacity.

Vellam: The Essential Drink is a contemporary film based on a true story about a drunkard in Kannur. Jayasurya stars alongside Samyuktha Menon, Siddique, Santhosh Keezhattoor, Dileesh Pothan and Sreelakshmi. The movie follows a man as he slowly falls into depression after a certain incident in his life and starts to drink heavily. Eventually his close friends and family forsake him; his wife and child leaves him as well. Watch as this drunkard goes down deeper and deeper into the never-ending rabbit hole, that is inside a bottle.

The trailer for this film dropped last week (on 15th January 2021) and it has quietly reignited the buzz for the film. Check out the trailer for Vellam: The Essential Drink at the end of this article.

Check out Vellam: The Essential Drink in theaters, which will be premiering from today.