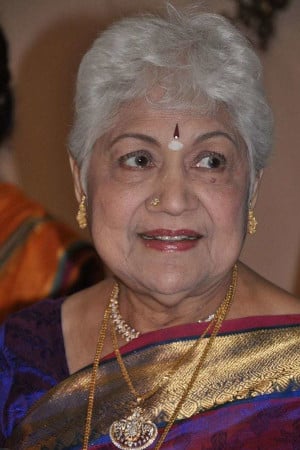 Sankaramanchi Janaki (born December 12, 1931), popularly known as Shavukar Janaki (Telugu షావుకారు జానకి;Tamil: சௌகார் ஜானகி; Kannada: ಸಾಹುಕಾರ್ ಜಾನಕಿ), is a south-Indian actress who has acted in over 385 Tamil,Telugu, Kannada, Hindi and Malayalam films. She also performed on stage in over 300 shows, and performed for TANA all over the United States in 2 Telugu plays created by actor Murali Mohan. At age 11, she was a radio artist in Telugu programs. She started her acting career when she had a three-month-old baby and went on to become a popular actress with hits such as Sowcar (Telugu), Pudhiya Paravai (Tamil), Iru Kodugal (Tamil). She also played lead roles with famous directors such as Dada Mirasee, K Balachandar. She is the elder daughter of T. Venkoji Rao, paper technologist (England), and Sachi Devi. She completed matriculation from Gauhati University in Assam and has received honorary Doctorate from University of Arizona.