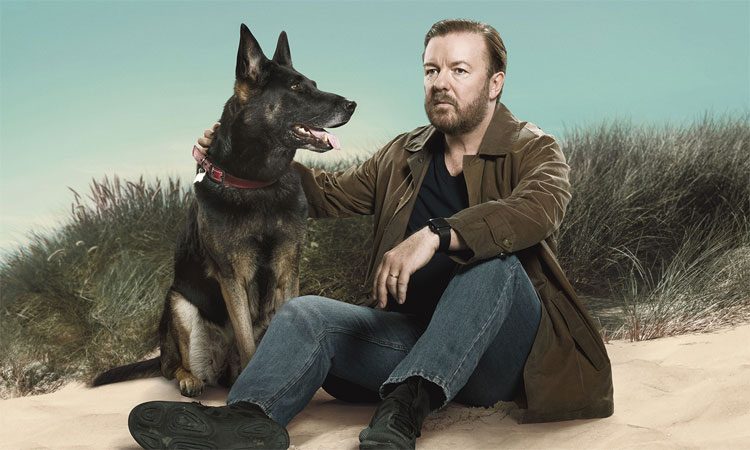 Tony (Ricky Gervais) is a grieving middle-aged man who is sad and depressed and contemplating suicide after the death of his wife. However, over a few weeks and through interaction with various characters he changes his outing towards like, internally and externally, is what After Life is all about.

Ricky Gervais is perfect in the role of Tony. He knows the character inside out and performs accordingly. There is no over-action, but a type of repetitive action is seen which is the unique style of the actor. It doesn’t hamper our enjoyment of the proceedings as Ricky Gervais grabs the attention with his writing and sharp observations.

There are many moments which are subtly done that stays with us due to the way they have been executed. More than the performance the writing and emotional underpinning stands out.

Ricky Gervais is the writer and director of the series, besides being an actor. The setting and space are similar here to his break out work The Office. Only here, it is a much deeper and offers philosophical ruminations on life bordering on preachiness which is not his style.

In each episode, Tony meets a new character and interacts with the existing characters in a way that they bring out new dimension and change his outlook. It is not just the character on screen, that gets the message, but also the viewer watching it.

Each new episode is neatly designed that way to show character progress, create a bond with them and also generate empathy. After Life succeeds in building those emotions methodically and in the end, we connect to even a small character or at least recognise its presence. Each character has similar issues, and the way they cope and how it reflects on others is neatly brought out.

The problem here is that or repetitiveness and occasional jump into sermons about life. The interactions with Anne, for example, starts off sweet but in the end, it sets into the predictable life lessons. And as mentioned above, many characters go through similar issues which add to the feeling of humdrum and monotony. That they still are alright is the redeeming quality.

Overall, After Life has a great message about life and is a systematic character study of a person going through depression, it is a problem that everyone goes through and that why there will be a connect at some level for sure. The fantastic writing further adds to the connection. However, it is a tad repetitive and lengthy which brings the overall impression a notch down. Still, it is a good watch.

The characters in After Life are easily identifiable and memorable. It is not because of the acting, but because of the limited number and effective utilisation with neat characterisation. There are four members in the office and a similar number outside, and by the end of the series, we come to recognise each one of them.

The four members of the office are Tom Basden, Tony Way, Diane Morgan and Mandeep Dhillon. Each comes with a unique character trait, and they act as naturally as possible within that space. More than the performance, the quirks register. When it comes to outside the office, there is a Nurse played charmingly by Ashley Jensen, challenging her differently is Penelope Wilton, a psychiatrist with dollops of sarcasm by Paul Kaye, and the paper-distributor cum drug addict, Tim Plester. They are all memorable in their way by doing realistic and straightforward action. Even, a small recurring character like that of a Postman, registers. It is the power of good writing.

Music And Other Departments:

The music by Andy Burrows is soulful and soothing. It creates a melancholy feels. The usage of songs is apt and brings emotional depth. The cinematography Martin Hawkins is neat. It follows the mockumentary style of the director’s previous outing partly. Jo Walker’s editing is crisp and lets the emotions flow smoothly without any jarring cuts.

Feeling Of Monotony
Preachy At Times