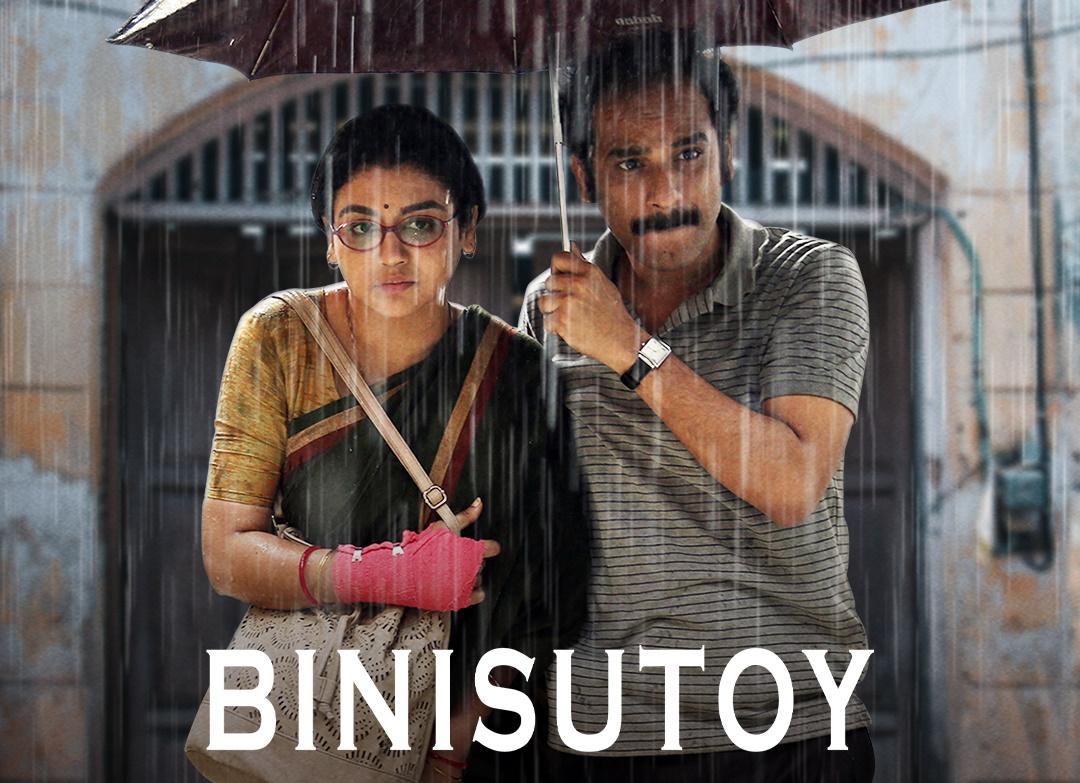 BOTTOM LINE: A Sharp Yet Unique Look Into Loneliness

Skin N Swear: Not much of either.

Srabony Barua, a 30-something housewife and Kajal Sarkar, a 30-something bachelor meet while auditioning for a reality show. After Srabony has a minor accident, Kajal decides to take her to a clinic nearby. While spending time together, both of them eventually realize they have a lot more in common with each other than they thought.

Binisutoy has a very unique premise, but what keeps the film interesting are the protagonist duo – Jaya Ahsan and Ritwick Chakraborty. The casting director could have gone with any two actors and the film still would have been good – but both of these actors portray their roles with such nuance that it is almost impossible for us to imagine another duo playing these parts. And most of the film’s screen time is shared between both of these actors, so we see their brilliance throughout. The subtle gestures and movements make this film very realistic.

There are two main reasons to watch this film – the premise and the interesting characters. The film starts off like this – Kajal, a 30-something bachelor meets Srabony, a 30-something housewife during a TV show audition. Kajal is undergoing a crisis – he has misplaced 50,000 rupees. Srabony is looking for a replacement vase that she broke – a vase that belongs to her young daughter. She also wants to travel with her daughter and has withdrawn 50,000 rupees as well. However, at the end of their unique journey, Kajal and Srabony clash in their stories and split up abruptly. While this seems odd, it turns out that both of these characters are living a double life. Kajal is actually a man who is happily married with an eleven year old son, while Srabony is a successful woman – working as the managing director of a tea company while living away from her husband (and have been doing so for nine years). It seems that both characters have found a similar way to escape their mundane lives.

And that is the premise. And for a film with 90 minute runtime, the film subtly packs in a lot of details from both characters’ lives. We say characters because besides the fake names they gave themselves, their actual names are not revealed in this film. Binisutoy is filled with similar nuggets throughout the film. It also makes us wonder about some of the things these characters said while they interacted with each other. For example – when Kajal wanted to run away with Srabony’s bag; we initially thought that he wanted to steal the money for himself – to give to Antara. But now, we understand it because he wanted to see if he could actually do it as another person; seeing if his “character” can actually steal from someone like Srabony. We also see Srabony confusing Kajal while talking about “her friend/his finace” Antara. While Kajal looks as confused as us, Srabony has figured out that she is in the presence of a “player” (just like her) and she throws a “curveball” at him, to get him to end their conversation. Their first interaction is similar to a cat-and-mouse game and it is brilliantly done.

The first half of the film is probably the best half of the film (while the second isn’t bad either). We are shown two ordinary characters spend time with each other only to find out that they are two completely different people with successful careers. Binisutoy’s message here seems quite clear – a successful career does not mean happiness. Everyone can feel lonely and this film stamps in that point almost immediately. Sure, there are a few slow moments in the movie; and the ending might seem anticlimactic to some. But they are done for a reason. The slow moments are shown at specific moments in our lead duo’s lives. It implies that while they do enjoy their normal lives, it can get quite boring. Their friends/family keep them grounded – which impacts these characters both negatively and positively.

Music deserves a mention in this movie. While the songs are not all that memorable, the impact it has while it plays in the background is huge in the progression of the story. It also gives us an insight into the character’s thought process as well. The writing and direction by Atanu Ghosh also deserves a special mention. The writer-director has managed to give us a good look into his thought process and has given us a beautiful contemporary film. The cinematography and editing is good as well.

Overall, Binisutoy is an engaging, introspective film about loneliness which shows us a unique, interesting way with which two seemingly ordinary people deal with it. It starts off borderlining on serendipity and ends up being a bittersweet philosophical ending. Check out the film for the unique story and characters.

While most of the film focuses on Jaya Ahsan and Ritwick Chakraborty’s characters, we do see a couple of good side characters in Jenny and Kaahon. Chandrayee Ghosh doesn’t have much screen time, but she is brilliant during the few minutes we see her on screen as Jenny. Young Samontak Dyuti Maitra plays the eleven-year-old Kaahon in a surprisingly nuanced manner. The young actor is going places if he keeps this up.

The best part of the film is the script. However the direction and cinematography of the film cannot be ignored. Music also plays a major part in this movie. While the songs are decent, the song lyrics are introspective and they give us an insight into the minds of main characters.

Yes. The film is surprisingly engaging.