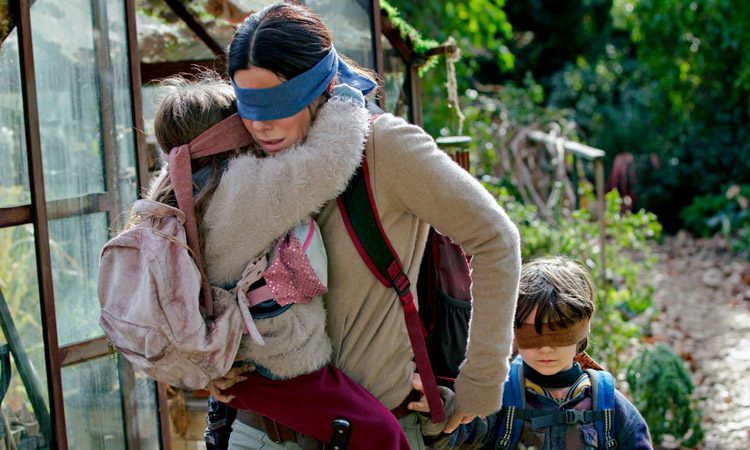 A deadly force is making people commit suicide by weakening them psychologically and preying on the worst fears. Malorie (Sandra Bullock) and few others are forced to stay together to survive the apocalypse that is onto them. Who all manage to escape and how? 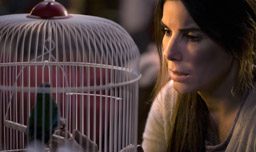 Sandra Bullock has come a long way from being an action comedy star to being taken seriously as an actor in dramas. Bird Box is a perfect outing for her as it forms the right marriage of action and drama.

From the opening, Sandra Bullock is in the zone. The pitch is slightly over the top, but that is necessary for an action thriller like Bird Box. The action here is not external, but that needs to be asserted physically and mentally. Only an image of her strength needs to be projected and not shown literally. Sandra Bullock does a neat job with that. The romantic portions do feel out of the track, but that is more to do with the jarring in narrative and how the screenplay progresses on screen.

Director Susanne Bier tackles a different outing than the usual that she is known for through her films. Bird Box is an end of the word-post apocalypse thriller that requires a different sensibility. Susanne Bier tries to adapt to the genre by doing a mix up of her strengths and trying something new. The result is an inconsistent narrative that is not entirely satisfying.

While there are multiple characters, emotionally and dramatically Bird Box moves on two distinct tracks. One is a thriller that is driven by the mysterious force and the killing and how-to-survive. The second is the interpersonal drama between various characters. The director is known for delivering compelling dramas in that space, but she fails to make a mark here. Bird Box is flat on both the counts, though the setting and mood, and overall atmosphere created for the post-apocalypse thriller parts are well done. A lot of the credit goes to the eerie background score though. 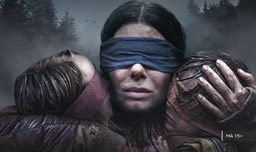 The biggest issue with the whole movie is the formulaic characters and their progress. There are no real surprises, barring the psychotic turn of events. That segment stands out. Also, the mystery surrounding the force that leads to suicides is exciting, but it leaves one unsatisfied the way it progresses. Many questions arise as the story progresses that feels unanswered which adds to the dissatisfaction. Eventually, it aides the formulaic narrative rather than developing into something more worthwhile.

Overall, Bird Box has enough thrills, albeit intermittently, and a mysterious force to keep one engaged in parts. But it misses out on delivering a more engaging and a cohesive narrative that could have truly made it memorable.

There are a number of characters in the movie and all come together in a particular chain of events. Trevente Rhodes, John Malkovich playing John Malkovich for the nth time, Lil Rel Howery, Tom Hollander are the noticeable ones among the ensemble. Rhodes is essentially playing the main male lead but is a support to the female star. He is okay. Tom Hollander has the least screen time among them, but he makes the utmost impression and stands out among the crowd. The child artists Vivian Lyra Blair and Julian Edwards are fine. The rest are alright.

The ever-dependable Trent Reznor and Atticus Ross deliver once again with their background score. It helps in creating the best moments of the films. Salvatore Totino’s cinematography is alright. The sequences on the river are well shot and stand out. The editing by Ben Lester is a mixed bag. The writing is passable at best with many corny bits. It fails to rise above the formulaic narrative.